Southeast Asia is one of the world’s most diverse and fulfilling regions to visit. With so much to see, do, taste, and experience, all at what seems like a bargain price, it can be easy to become overwhelmed and make a few mis-steps. Here are some things to NOT do on your Southeast Asia tour, to help you enjoy a vacation that leaves a good impression on both you and your destination.

Modern Asian cities tend to get a rap for being noisy, polluted, chaotic, impossibly huge concrete jungles, where everything moves at a hectic pace – except the traffic when you’re in a hurry. Though there can be challenges, your enjoyment of Southeast Asia’s cities really depends on your attitude. Are you willing to embrace their uniqueness? This isn’t Europe. Few cities are maintained in a traditional style, and they usually aren’t striving for walkability. But the sights, be they temples, palaces, ancient shopping districts, or historic markets, are often well worth the effort. There are other, more subtle charms in each city as well. Take Hanoi in Vietnam. Where else can you hop on the back of a moto taxi and zip through traffic along centuries old streets? Or walk calmly and confidently into traffic to cross the road, knowing the locals will weave around you? If it does get too much, pull up a stool at a café, order the local beverage of choice, and watch the chaos swirl around you. And those local flavours count for a lot. Vietnam, Thailand, Malaysia, and Singapore all deserve a spot among the world’s top foodie destinations.

Globetrotters don’t come to this part of the world for a familiar experience. They come to get out there and try something new! Resisting the city’s natural flow is your fastest route to frustration. So (without compromising safety, of course) take up those unique experiences when offered. Try the street food, bargain in the markets, take a trip using the local transport of choice, and try to leave your idea of what makes a ‘functional city’ at home.

Singapore is a good choice for beginners looking to embark on a Southeast Asia tour. While it’s the most expensive city/country in the region, nearly all of the population speaks English, the traffic is orderly and the streets clean, the sights and attractions impressive and forward thinking, and the food endlessly varied and delicious. And it still offers an authentic taste of Asia. Singapore prides itself on its rich mix of ethnicities, so a visit here can really feel like you’re sampling Asia in miniature.

Stay in the Cities

Now that we’ve sung their virtues, know that the cities of Southeast Asia are far from the whole story. Reaching the highlights outside of town is easier than you think. Hiring a car yourself is madness, but booking a tour through your agent, either individually or as part of a group, can be an illuminating way to reveal the surrounding sights. A visit to Bangkok just isn’t complete without zipping out to the Ayutthaya ruins to get a sense of one of most splendid periods in Thai history, or the River Kwai and its famous bridge for an insight into the grim conditions faced by prisoners of war during World War II. Leave frenetic Saigon behind and discover the fascinating Cu Chi Tunnels, or get a different perspective on Vietnamese life in the Mekong Delta. Visit a floating village outside of Siem Reap, or if you’re visiting Yogyakarta, Indonesia, do not miss the awesome temples of Borobodur or Prambanan.

With that said, be sure your day trip is in fact a day trip. If you’re visiting Halong Bay, for example, you’ll definitely want to overnight on the boat. The drive is much longer than you might think, so don’t try to cram a full Halong Bay trip with return to Hanoi into one day. It’s exhausting, frustrating, and leaves you no time for exploring those special, hidden corners of the Bay. Consider a one-night, 3-star cruise on the Bay to be the minimum standard for a comfortable and rewarding trip.

Sure, you consider yourself a fairly savvy traveller and don’t want to get ripped off. Everything seems so affordable in Southeast Asia, and you’re suspicious when prices start to creep up. Just don’t take it too seriously. Being savvy is a good quality for travelling here (see below). Being cheap is not. Many local people, particularly in rural areas, survive on shockingly low incomes. Paying an extra few dollars for that skirt might not mean that much to you, but it can make a huge difference to them. So don’t get into an argument over such a small difference. If you’re bargaining in the markets, counter the initial asking price with an offer of about a third of it. You won’t get that price, but it’s a good start to negotiation without being insulting. Try to meet the merchant around the 50-60% mark, and don’t be afraid to start walking away. If they try to stop you, you’re still in the game. If not, you really are trying to drive them below what they can offer, and you might want to ease up. It’s also not unknown for travellers to order tailor-made clothing only to back out of the deal or try to renegotiate at the last minute, after the perfectly good work has been completed. Do not do this. Not only is it extremely disrespectful, but any lost income will likely come out of an employee’s pocket, and that could easily be a month’s salary or more.

Overpay Just Because You Can

While you don’t want to fight tooth and nail over a few dollars for a souvenir, don’t instantly agree to the seller’s asking price either. It’s not just you who’ll be ripped off. Blindly paying too much just because you can will drive up prices for the locals too. So aim for that happy medium, which is usually about 50-60% of the initial asking price.

Forget to Mind Your Feet

Etiquette in Thailand can be a complex thing, but if you keep just one thing in mind, it should be to mind what you do with your feet. This is good advice throughout much of Asia. Ensure you remove your shoes when entering a temple (slip on shoes are your new best friend!), and don’t step on the threshold, where spirits are said to reside. Don’t ever point your feet at another person, or something meant to represent them, such as an image. Likewise, don’t even step on someone’s picture. In Thailand, this includes stepping on a coin to stop it rolling away, as currency features the face of the late King. Conversely, the head is accorded great respect, and should absolutely not be touched unless specifically invited to do so.

It’s easy to be so overwhelmed by warnings about hygiene on your Southeast Asia tour, that you start taking paranoid precautions. Cities like Bangkok, Singapore, Kuala Lumpur, Hanoi, Saigon…and the list continues, are famous for their street food, and they wouldn’t be if it wasn’t generally safe. If you’re not feeling confident, or would like a bit of local knowledge to boost your courage, embark on an organized street food tour. Otherwise, a decent queue (preferably of locals) usually signals a winner.

Buy from Kids on the Street

And don’t give to them when they come begging, either. It can be hard to say no, but this kind of street begging or ‘commerce’ is a full time industry that exploits, rather than helps these kids. The $2 you might spend on a bracelet goes right into the pocket of some adult running the show behind the scenes, and their little enterprise keeps the kids who approach you out of school, or worse. If you want to help, there are plenty of legitimate channels you can take.  Do not, however…

Visit an Orphanage without Thorough Research (or actually helping)

Orphanages are a hugely contentious issue, particularly in Cambodia. Ever since Angelina Jolie adopted Maddox, the smiling, irresistible faces of orphaned children have become a somewhat unsettling part of Cambodian tourism’s image. It all sounds reasonable enough. Visit an orphanage in a local town, meet the kids and their teachers, learn about the orphanage’s work, and ideally, help out with a donation of your own. Unfortunately, where there’s money to be made, there are scammers looking to make it, and they have no qualms about exploiting needy children in the process. It’s also not uncommon for some orphanages to buy children from their parents in order to sustain ‘demand.’ It isn’t just a few cases, either. It’s been claimed that up to 75% of children in Cambodia’s orphanages have at least one living parent. But wouldn’t that alone get them shut down? Well, to make the ethics around this even thornier, some of these children are in fact better off in the orphanage than in their birth homes, where household income is often less than $30 US a month. 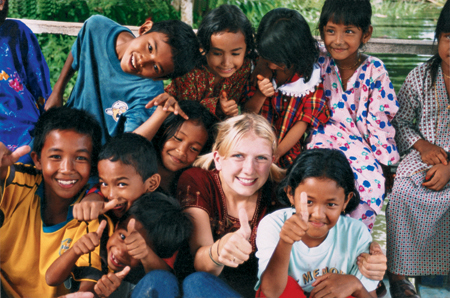 In 2013, the government enacted tighter regulations on the orphanage ‘industry’ to protect children, their communities, and well-meaning tourists. But there are still ways you can help. Ask your travel agent for advice on a reputable orphanage or volunteer organization you might be able to visit on your trip. If your organized tour includes an orphanage visit, this vetting has most likely been done for you, but it never hurts to ask a few questions. Take the visit as a chance to learn about the work being done to better the lives of the children, and treat the experience as a conversation, not a photo op (a quick Facebook or Instagram selfie is not helping to “raise awareness”). Taking this approach, you’ll learn a lot about the children’s day-to-day lives and activities, and about their education and health needs, all of which will better inform you if you choose to make a donation. Don’t be afraid to ask specifically what your money will buy, either. If you’re sticking around to volunteer, be realistic about what the orphanage actually needs and what skills you can bring to help out, such as teaching, gardening, or basic construction work.