Climbing the Sydney Harbour Bridge is truly special when exploring the world class city of Sydney, Australia. Not just for those looking for a little excitement, the bridge climb ultimately leads you to perhaps the best lookout spot in all of Sydney (there are a lot!), it’s really fun, well-organized and totally safe.

Recently Bridgeclimb has hosted one after another of Hollywood stars including most recently Paula Abdul and several of the actors from Game of Thrones and Modern Family. So you never know, you may be walking behind a celeb or a Royal during your bridge tour!

The Bridgeclimb company came about several years ago, but has subsequently won many awards, after the founder persisted for years lobbying the government to allow him to lead tours up the spine of the bridge. Time and again he was sent away, eventually racking up a list of 400 different reasons why he couldn’t possibly lead tours on the bridge… So you can imagine their surprise when he proved he could work around all 400 reasons, making it a fun, safe and thrilling excursion – they couldn’t think of any other excuse, and today it’s extremely popular. For instance, one of the safety hurdles was to prevent items falling out of climbers pockets, onto the bridge far, far below – so everyone has to wear a ‘coverall’ type outfit, underneath your innovative safety harness which keeps you secured at all times, but doesn’t hinder walking.

There are actually two ‘types’ of climb adventures, both of which peak at the summit of the Harbour Bridge. Both cost the same, but the cost depends on the time of day that the climb takes place, i.e. Dawn, Day (most expensive), Twilight or Night (still very impressive!). The two types are the original Bridge Climb, and the Express Climb.

The Bridge Climb is the original 3.5 hour guided journey to the top of Sydney Harbour Bridge. It takes guests along the outer arch of the Bridge on catwalks and ladders all the way to the summit, providing uninterrupted views from a vantage point 134 metres above Sydney Harbour, the 360-degree views of the city, the Opera House and beyond are unforgettable

The Express Climb is a 2.5 hour Climb experience that journeys to the top along the inner arch of the Bridge providing a unique opportunity to explore the inner workings of this amazing structure. See the Bridge up close and hear the stories behind this triumph of engineering. Wind above the harbour on catwalks, scale the steel heart of this structural masterpiece and emerge to a unique summit experience via a mammoth staircase between the two arches of the Bridge. This is an ideal experience for your clients who are short of time when they are in Sydney but looking to have that unforgettable experience of Climbing to the summit of the bridge. 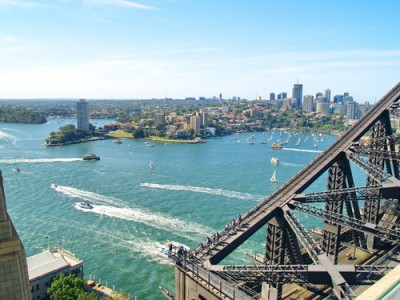 The Sydney Harbour Bridge Visitor Centre opened in October 2009, enhancing the experience of a climb by enabling guests to explore the unique history behind an Australian icon in this inspiring exhibition and cinema. Entry to the centre is free and we highly recommend allowing some extra time to look through these exhibits to enhance the Bridgeclimb experience. It’s quite fascinating to hear how they originally built the bridge with virtually no safety precautions, or how they go about painting the bridge to this day to maintain it. 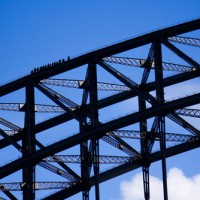 All this for around $250 per person! Now some travellers have told us they felt this was expensive when we first quoted them the price, but there has never been a single one of our travellers who felt it wasn’t worth every penny spent after they’d finished their climb, many tell us it was easily a highlight of their trip.