Setouchi Takes Your Clients’ Japan Vacation off the Tourist Trail You might not know the name Setouchi, but there’s a good chance you’ve seen it in pictures. Some of Japan’s most recognisable images including Himeji Castle, the ‘floating’ gate of Itsukushima Shrine, and Hiroshima’s sobering Atomic Bomb Dome are all etched into the consciousness of those clients dreaming about a trip to Japan.

To reach them, travellers need to go beyond the classic first-time visit combination of Tokyo and Kyoto. Without detracting anything from those wonderful cities, the prefectures of Setouchi offer a much broader perspective on Japan. Set on the Seto Inland Sea, Setouchi encompasses the 7 distinct prefectures along the coastline. Each one contains its own highlights, some of which are well known, while others will suit particular interests or take a little extra digging to discover.

If you or your clients have heard of any prefecture in Setouchi, it’s probably Hiroshima. Its namesake city is usually the third major city visitors to Japan put on their itinerary, and it’s usually to see Hiroshima Peace Memorial. This was ground zero for the atomic bombing that foreshadowed the end of WW2, and the skeletal remains of the Industrial Promotion Hall have been left as a sobering reminder. Just across the river, an island park contains numerous memorials and a haunting but informative museum. It’s a must-visit while in Hiroshima, but it’s far from the prefecture’s whole story.

The ‘floating’ torii gate of Miyajima is one of the world’s most photographed structures. The fact that it’s actually fixed in place does nothing to diminish its beauty, nor its heritage as a pilgrimage point that particularly welcomed worshippers arriving from the sea. Your client can experience a little of that naval heritage themselves by spending the night in a ‘floating ryokan.’ If you have any clients that are cat lovers however, they may want to make a pilgrimage of their own to the fabled ‘Temple Walk’ of Onomichi city, which connects 25 temples including the famous Senko-ji, reached via the aptly named Cat Alley. And yes, the adorable furry gatekeepers are still very much in residence.

Himeji Castle is perhaps the most recognised citadel in all of Japan, rivalled perhaps only by Kumamoto Castle in Osaka. It also bears the distinction of being one of Japan’s first UNESCO World Heritage Sites. Standing just over 45 metres tall, Himeji is a fixture not just in the lore of Hyogo, but in that of broader Japan. Hyogo is home to the city of Kobe, and its namesake variety of wagyu beef. It also produces almost a third of all Japan’s nihonshu, aka sake! With history buffs and foodies covered, Hyogo reserves one last treat for thrill seekers in the form of the Akashi Kaikyo Bridge. This is the world’s longest and tallest suspension bridge, so of course, your brave clients can climb it!

The entire Setouchi region is dotted with eye-popping contemporary art museums that rank among the finest in the world. Then, there’s Kagawa, which takes things to an all new level, particularly on the islands of Naoshima and Teshima. An archipelago of creativity, exploring Kagawa can often allow your client to feel like they are wandering an immense outdoor gallery. The landscape is dotted with fascinating sculptures and art installations of every kind, including some of the country’s best art museums. Visitors can explore the Art House Project, which repurposes a wide range of abandoned structures into studios and galleries, and the Chichu Art Museum, known both for its Monet-inspired garden and dramatic hillside location. Foodies aren’t left out either. Kagawa is the spiritual home of udon in Japan, and competition is fierce when it comes to preparing (and finding) the best noodle dish!

Playing an equally important role in feeding the nation is Okayama, where the warm climate is ideal for growing peaches, grapes, and more. It also offers some fantastic vantage points over the Seto Sea. Culturally however, Okayama is one of Japan’s most intriguing prefectures. The region is known for its sword making, Bizen ware – a traditional style of Japanese pottery – and other handicrafts. It also holds Kibitsu-jinja, which might be Japan’s only shrine where your client can talk to a demon.

Your active clients will love Ehime! So will most others, but one big attraction here is the Nishiseto Expressway. This 70 kilometre route is one of Japan’s most popular long-distance rides, with bike rental and drop off locations available along the route. Cyclists can opt for some variations to suit their own level of fitness (swapping the steep hill onto Shin-Onomichi Bridge for a short ferry ride for example). After all that exercise, it’s hard to resist the allure of a classic Japanese onsen. Dogo Onsen is a popular spot to recharge tired muscles in the waters of a 3,000 year old hot spring. After rejuvenating in those ancient waters, Globetrotters can continue their trip through time in the traditional old town of Uchiko.

Fans of the outdoors won’t want to bypass Tokushima. The Iya Valley offers one of the most spectacular landscapes in Japan. It just happens to be steeped in 800 years of history as well. Your client can also feel the rush of nature, riding the rapids on the Yoshino River. After all that activity, they will be grateful for a dip in the prefecture’s hot springs. But Tokushima isn’t just about outdoor thrills. The Awa Dance Festival is one of Japan’s biggest annual events for tourism, attracting a massive 1.3 million spectators.

Yamaguchi might just be one of the loveliest prefectures in all of Japan. It also possesses one of its longest coastlines, rounding the southwestern tip of the large island of Honshu. Picturesque bridges cross its waterways, but Yamaguchi’s most iconic claim to fame is a little more infamous. This is the home of fugu, or pufferfish, one of Japan’s most controversial delicacies. Luckily, your clients do not have to brave the risky dish to experience Yamaguchi’s flavours. They can visit Karato Market to sample the region’s freshest (and safest) fish, join the ongoing food festival that is Irori Sanzoku, or feed their inner culture vulture at Joei-ji Sesshu-tei Garden, which is dotted with outdoor art.

Goway has highlighted 3 of our popular itineraries that include the wonderful region of Setouchi. 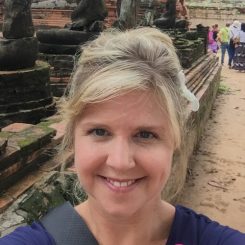 I was born in South Africa and have been living in Canada since 2008. The travel bug bit me early on when I started a career with South African Airways before working for large tour operator companies in various positions. I was offered the wonderful opportunity to immigrate to Canada in 2008 and jumped at the chance to experience this wonderful country and its incredible people.