For North Americans, New Zealand can seem like the ultimate frontier. A country steeped in myth, whose contrasts seem almost too beautiful to be real. But with direct flights to Auckland from Vancouver, including a seasonal non-stop Air Canada service beginning in December, New Zealand is easier to reach than many travellers think!

Auckland and the Bay of Islands

Auckland is your client’s most likely point of entry to New Zealand. Repeatedly named one of the world’s most liveable cities, it’s worth a day or two here to see the perfect balance of indoor and outdoor living that wins it that title. Heading north, history Buffs and water babies alike will love New Zealand’s Bay of Islands. The Treaty of Waitangi was signed here in 1840 between the British Crown and the North Island’s Maori chiefs, establishing the New Zealand we know today. Visitors can visit the treaty grounds and the Museum of Waitangi, but should also leave plenty of time for enjoying New Zealand’s only subtropical waters in the Bay of Islands.

One of New Zealand’s best known destinations, Rotorua is a must for culture vultures and families. Famous for its bubbling mud pits and spouting geysers, Rotorua also showcases Maori culture like nowhere else in New Zealand, particularly that of the local Tara Arawa iwi tribe. Clients can share in a traditional ‘hangi’ feast with delicacies cooked to perfection in a natural earth oven, learn about the history and heritage of the local Maori people, then relax and recharge at one of Rotorua’s luxurious natural spas.

Which capital city would you consider the world’s coolest? Obviously, it depends what your client is looking for in a city. But if engaging museums, a serious addiction to all forms of art, top notch food and wine, and a wealth of restaurants, bars, and cafes all pique their interest, they’ll find lots to love in Wellington. A smallish city with a big cultural appetite, Wellington is home to the country’s national symphony orchestra and ballet, Te Papa Tongarewa, New Zealand’s beloved national museum, and much of the country’s lauded film industry. A serene outlook over one of New Zealand’s most gorgeous harbours doesn’t hurt its appeal either!

On either side of Nelson, located on the northern tip of New Zealand’s South Island, you’ll find two of the country’s most appealing treasures. The country’s Marlborough wine region is famous the world over, particularly for its aromatic Sauvignon Blancs. To the other side of the city lies Abel Tasman National Park, an unspoiled, car-free wilderness area where pristine waters wash up on golden sands, and local wildlife always seems to be thriving just a short bike ride or kayaking trip away. For nature lovers and active travellers alike, this is a must-see corner of New Zealand.

The Wild Beauty of the West Coast

From pancake shaped rocks to plunging fjords carved by slow moving glaciers, the West Coast of New Zealand’s South Island stands out, even in a country famous for natural highlights. Best taken over a few leisurely days, the West Coast drive connects some of New Zealand’s most attractive towns with impressive natural features, notably Franz Josef and Fox Glaciers. A full day at one of the glaciers is highly recommended (check out our blog article) if your clients need help deciding), but the Pancake Rocks of Punakaiki are an easy stop on a West Coast road trip. They offer up some fantastic photo opportunities, particularly around their famous blowhole.

Adventures in Queenstown and the Fjordland

New Zealand’s South Island is famous for its adventure sports and wilderness spaces, and true adrenaline junkies will find it hard to replicate the thrills available in Queenstown. Jet boating, bungee jumping (believed to have been invented here), zip-lining through ancient forests, and more are what a stay in Queenstown is all about. Or you can slow things down, taking a gondola ride to Queenstown’s most impressive view over Lake Wakatipu, with the Remarkables mountain range in the distance.

If your client only has one day to see the spectacular Fjordland, be sure they visit Milford Sound. Rudyard Kipling called this waterway the Eighth Wonder of the World and as you glide by Mitre Peak, staring up at the immense cliffs and keeping an eye out for seals, dolphins, and the occasional whales that come in from the Tasman Sea, it’s impossible to dispute his claim. Doubtful Sound is a little harder to reach, but the wildlife spotting opportunities, including a wide variety of sea birds, seals, bottlenose dolphins, and several species of whale, can make the trip worthwhile.

How long should clients spend in New Zealand?

That’s up to the individual traveller! But we recommend a minimum of one week per island to avoid rushing. Many major highlights, particularly on the South Island, are connected by only one or two major roads. But then, why would anybody want to rush?

If time is tight, Air New Zealand connects travellers with ease to cities around the country, with onward flights to Australia and many nearby islands departing from major hubs including Wellington, Queenstown, and Christchurch. 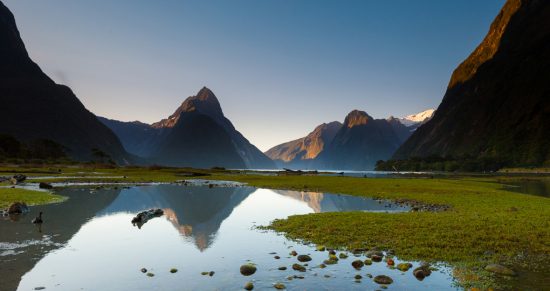 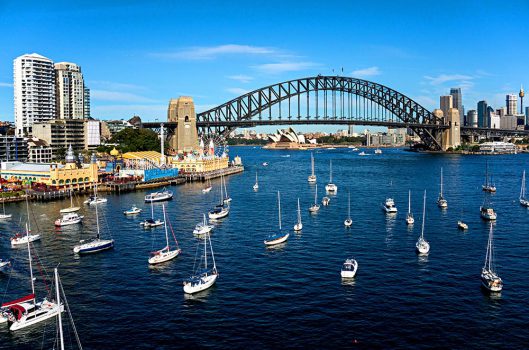