A loud, drawn-out hoot from the locomotive echoed through the African dusk. The train came screeching slowly to a halt. I shoved my head out of the window in time to see a family of elephants crossing the tracks. There was nothing for it but to wait while the female ushered her babies across the line.

That single, unexpected moment at sunset on the border of Hwange National Park in Zimbabwe epitomised the allure of our journey. We travelled for 16 days through six southern African countries, sleeping every night on the train. At supper on the first night, train manager Rudi Ahrens summed up the philosophy of a trip on the Shongololo Express. “It’s something more than a holiday,” he said, while addressing us all in the wood-panelled dining car. “It’s an adventure.”

Our fellow passengers were mostly older, retired Europeans, Americans, Kiwis, and Aussies, with a sprinkling of South Africans. It is a luxury train with air-conditioned private cabins and bathrooms, a bar and a dining car where chef Paul Gutu and his team managed to conjure up the most wonderful four-course meals for two sittings every night in a tiny kitchen. The staff on the train worked incredibly long hours, and so for us travellers hard going, the trip was not. However, what made it an adventure was the fact that the train carries its own minibuses, and every day there was a side trip to places like Vic Falls, Chobe, Great Zimbabwe and the Kruger.

The rolling stock is a trip into nostalgia. It is made up all old refurbished Rhodesian and South African rail cars with the logos ‘RR’ or the small Springbok head embossed on the windows.

We began at Vic Falls, sleeping on the train at night, while there were day trips to Zambia and Botswana. It was on a boat safari in Chobe that I overheard two Antipodeans looking through binoculars and discussing the merits of a magnificent kudu bull. “Do you think it’s as big as a ‘roo?” one of them asked the other. “Yeah,” he replied, “about the same.”

Two nights later we pulled out in the gathering darkness bound for Hwange and our encounter with the elephants. From there it was a long, slow voyage on steel through Bulawayo, Matobos, then across to Gweru and down to Masvingo and Great Zimbabwe. At 3am one morning, we crossed the Limpopo at Beit Bridge into Mpumalanga and down to Kaapmuiden. From there we headed east to Ressano Garcia and the beaches of Maputo. Then we headed further south for the Ezulwini Valley of Swaziland and then all the way north to Jo’burg.

The sheer logistical challenges of a luxury train and its minibuses travelling through altogether nearly six thousand kilometers of southern Africa, provided continuous surprises and delays. A railway strike in Zimbabwe meant that reaching the remote station at Dete was no guarantee that we would be able to continue on the next section to Bulawayo. Rudi and his colleague, Sanele Mkhiza, were constantly on their two-way radios or cellphones asking the station masters along the route, “When does our locomotive arrive?” Usually, they would get two or three different answers, depending on the logistical problems of other trains on other tracks hundreds of kilometres away.

But somehow, it all worked. The journey flowed. Uncertain departures, surprising arrivals and unexpected detours all added to the allure of the trip.   Africa became part of the experience. All along the route, people came to greet the train, and the mostly wealthy tourists were shocked at times to see the extremes of wealth and poverty that exist. At the tiny siding of Somabhula, they clubbed together to buy sports equipment for the local primary school.

As the train rolled on across the vastness of the landscape, they began to understand something of the paradox of both beauty and hardship that defines this continent. “This has been a life-changing experience,” more than one of them said to me along the route.

And so it was. A voyage of unforgettable impressions: the breathtaking grandeur of the Victoria Falls, the turquoise wideness of the Indian Ocean from the hills of Maputo, the mist-filled valleys near Modjadjiskloof. Walking with lions near Gweru, climbing to Rhodes’ grave among the lichen-covered boulders of Matobos, or simply lying in bed as we clickety-clacked through the darkness and watching the moon through the train window shimmering over the bushveld.

Near Delmas, on the last day of our trip, we were passing an empty field when I spotted a young boy smiling and waving furiously though the long, green, spring grass. There is something about travelling on a slow, clunky train that makes people want to wave at you, and, knowing that, I waved back, sorry that our journey had come to end. 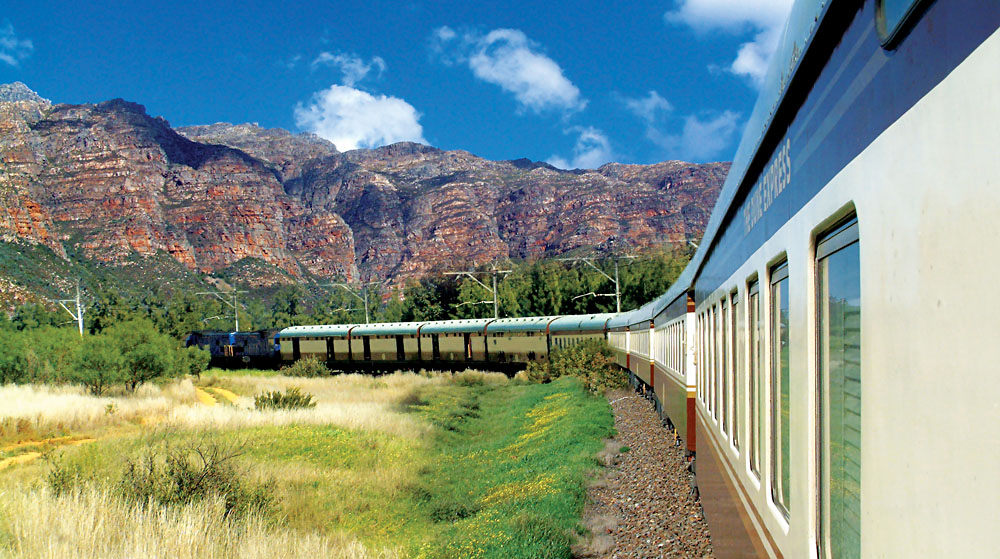