Each new year promises new adventures. In 2016, some savvy travellers return to Africa on a journey of a lifetime… before the rest of the world’s holiday-makers catch up!

Africa tourism has had a rough ride in recent years, weathering Ebola hysteria – despite the outbreaks being thousands of miles from the continent’s popular destinations – and political upheaval in one of its most popular destinations, Egypt. Knowing that these headlines are “so 2014,” savvy travellers have since been taking advantage of the light crowds and low prices, embarking on the Africa vacation of their dreams. It won’t be long before the mainstream catches up. Goway’s Africa bookings have been back at pre-Ebola levels for over a year now with no signs of slowing, so 2016 is a great year to go.

Africa is of course a massive place, where no two countries are alike. Sure, you want to go on safari, but will that mean a luxurious safari experience in well-developed Botswana, a slightly more adventurous camping experience on the Serengeti in Tanzania, a trip through the dunes to see unique versions of Africa’s most popular animals in Namibia, or a taste of everything (including wine) in endlessly diverse South Africa?

South Africa might be in for a big year in 2016, with the US dollar particularly strong against its local currency, the rand. North American visitors are getting five star deals at three star prices from Kruger to Cape Town. The beautiful “Mother City” was already a bargain, so with the dollar stretching further, travellers are staying longer, taking advantage of more Cape Town experiences such as Cape Peninsula wildlife tours, winelands trips, cage diving with Great White Sharks, and of course, fabulous views both of and from Table Mountain.

After saving that extra cash, you might want to splurge on the world’s most luxurious train ride for your departure. The Rovos Rail Edwardian moves quickly and comfortably between Southern Africa’s highlights, offering passengers all the splendour of its namesake era en route. As for those highlights themselves, no visit to this region is complete without a game safari, either at a national park or game reserve. Whether it’s Kruger in South Africa, Chobe in Botswana, or Hwange in Zimbabwe, Southern Africa’s reserves and parks are teeming with wildlife including the Big 5 – elephants, rhinos, leopards, lions, and Cape buffalo.

Capping off the region is Victoria Falls. The world’s largest sheet of falling water spectacularly links Zimbabwe and Zambia, and sends the mighty Zambezi River cascading into a series of deep gorges. Each one is a former location of the slowly retreating Falls, cut from the soft sandstone that crosses the plain. A once-in-a-lifetime sight like this warrants memorable accommodation, so consider a few nights at an iconic African property such as the Victoria Falls Hotel.

Despite taking you far from the world you know, an Africa adventure doesn’t have to mean “roughing it.” After your luxury train journey aboard the Edwardian is complete, you can sleep under the stars in comfort, sipping sundowners to end a perfect day’s safari. Even in Tanzania and Kenya, where the safari options are considered more adventurous, luxury options abound. There’s no better way to witness the famous Serengeti migration, or take in the vast variety of animals that call the Ngorongoro Crater home.

Not all of Africa’s great creatures can be found on the plains. For one of the continent’s most rewarding experiences, you’ll have to trek into the mountains of Rwanda, where you’ll come across a family of wild African gorillas. The similarities between the gorillas’ social behaviours and our own never cease to amaze.

Of course, that’s not to exclude the vast array of human cultures and societies that populate Africa. One of the most fascinating is Kenya’s Masai Mara, and a trip to the Masai Mara region is a great choice for culture vultures, as well as animal lovers keen for a safari. Unique among Africa’s civilizations is Ethiopia, the only country on the continent to remain independent throughout its history. Many of Ethiopia’s historic structures and ruins have earned UNESCO World Heritage listing, and with good reason.

None however are as famous as those further down the Nile. The tourist trade in Egypt has been particularly hard hit in recent years. The country’s distressing political upheavals have kept many would-be visitors away. It’s been a tragedy for Egypt’s economy, which relies heavily on tourism, but a golden opportunity for travellers willing to make the trip. Egypt’s recent visitors have enjoyed the majesty of its temples, pyramids, and ancient ruins without their usual tourist crowds. In fact, it’s been entirely possible to explore some of Egypt’s mightiest temples on your own in recent years – yes, in complete safety. In addition, Nile cruises, once only within reach of the wealthy, have been going for a comparative song, allowing visitors to notch up another of Africa’s ‘must do’ experiences at a bargain price.

Related Article:
Now Is a Great Time to Visit Egypt!

Far from simply “the land of safaris,” Africa is an endless treasure trove of experiences and opportunities awaiting anyone up for the adventure. Perhaps the hardest part is choosing which ones. Some travellers want it all, and in January of 2016, a strictly limited number of them joined Goway founders and owners, Bruce and Claire Hodge, on the Ultimate Africa Journey of a Lifetime. Travelling the length of Africa, from Cape Town to Cairo, these passengers enjoyed many of Africa’s quintessential experiences in style – while still whetting their appetites for more. Few globetrotters can boast having made such a trip, but a few more will join the list next year, as Goway repeats this incredible journey. 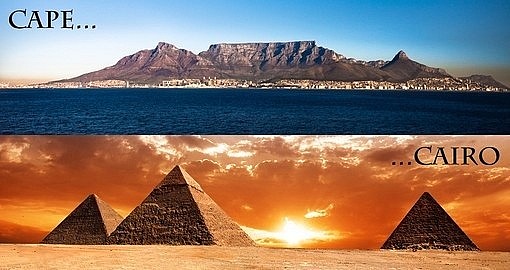