From Italian ravioli or gnocchi, to Polish perogi’s and Indian samosa’s, “dumplings” are eaten by many, many cultures around the world in just as many ways. From sweet to savoury, fried, baked or steamed, we just can’t seem to run out of ideas of what to pack into a little ball of dough, but China is arguably Dumpling Heaven – and have millennia old traditions surrounding this simple yet filling filled food. The below recipe is a simple, standard dumpling recipe typical of mainland China, where these would be referred to as jiaozi in Mandarin Chinese, while in Hong Kong, this same recipe would be referred to as dim sum (in Cantonese), and are often eaten as either a whole meal or more commonly as a snack accompanying tea.

Travelling in China, it’s almost impossible not to eat dumplings. From Shanghai’s top restaurants, to an old man in Xian steaming them in a doorway on a bustling street, they’re literally everywhere! While eating them is certainly fun, part of the reason Dumplings have a ‘comfort food’ appeal in China is due to the traditions surrounding how to make them, as making dumplings is half the fun. Around holidays, large family gatherings, celebrations and so on, dumplings would bring a whole family together in the kitchen to chip in and help make the dozens or hundreds of dumplings. The recipe below is for 50 dumplings, but you can obviously adjust the recipe as need be – depends on how big your family is!

Tip: There are literally hundreds of ways of how to ‘fold’ or shape a dumpling, you can lookup a few different ways to change up the look and appearance of your recipes, below is the easiest, most common way of finding them. 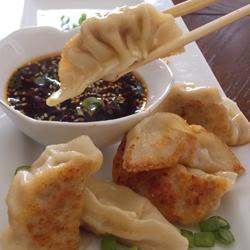