Art can be found almost in every city and country, but the lesser known galleries need to be sought out on a Europe vacation.

So, you’ve done the Louvre in Paris, the Uffizi in Florence, and the Prado in Madrid, plus many more major centres of art. If you are like me, you might enjoy some art galleries which exist but are not necessarily well-known.  I have chosen here a number of art galleries which appeal to me and hopefully to you.

Naturally, London is home to a large number of galleries, so here is a small selection of, to my mind, the most interesting and different galleries to visit while on UK vacations.

I stumbled across the Saatchi Gallery in the district of Chelsea. I spent a good hour having not only an interesting time but a fun one. I don’t believe there is a permanent collection here, so any exhibition shown could be on a temporary basis. Charles Saatchi, an advertising tycoon and entrepreneur, opened this gallery to show works that would otherwise not be seen elsewhere in London.  I quote a previous gallery executive, “The gallery’s guiding principle is to show what is being made now, the most interesting artists of today.” Many artists shown at the gallery are unknown to the general public and are subsequently offered shows by galleries and museums internationally. The gallery operates as a beginning for young artists to become known. To give you an idea of what I experienced, there was an exhibition of amusing photos taken by smart phones, including one of Queen Elizabeth having taken a “selfie” of herself and her family. Really… see below! There was also a room totally of mirrors which distorted everyone in there into most unusual shapes. This was just the start… and entrance is free. 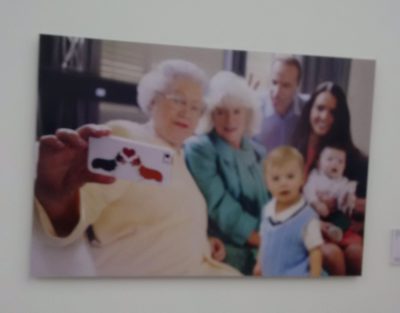 The Graffik Gallery is a place where legitimate graffiti artists can show of their work, and includes those of the master of graffiti art, Banksy, the British mystery artist and arguably the most controversial and prolific street artist whose identity is still unknown, even after his work has been found all over the globe for the last 20 or so years. It is located in west London near Notting Hill Gate. In addition to regular exhibitions, the gallery hosts workshops, master classes, and weekly seminars on graffiti art. The gallery has a reputation for discovering new talents. The gallery store sells originals and prints by well-known artists.

The Crypt Gallery is situated in, yes, a crypt of the St. Pancras Parish Church, originally used for coffin burials of archbishops, kings, and wealthy citizens who could afford to be buried here. It is now an art gallery showcasing contemporary artists. Once again, I quote the gallery, “As a church, we are pleased to include art that provokes and questions as well as art designed for contemplation, because all form an important part of our common humanity – a place and space to explore and be inspired.”

The Dali Theatre-Museum is a combination of museum and art gallery in north-east Spain, not far from Barcelona. Salvador Dali was an exceptionally individual artist whose aim was to evoke “a sensation of having had a theatrical dream,” and this gallery reflects that. This is the largest and most diverse collection of his works which include paintings, sculptures, and collages. You need to set aside at least a couple of hours to explore on your Europe vacation. No matter what your art inclinations are, this gallery will far exceed your expectations. I found it fascinating and enchanting. If you don’t find yourself in this part of the world, there are much smaller galleries exhibiting Dali art in Paris and London.

Marc Chagall Museum, located on a hill above the city, is home to the largest public collection of the Russian-born artist’s paintings of Old Testament scenes. Chagall is buried in St-Paul de Vence, a town not far from Nice. There are 17 interpretations of Biblical stories from the books of Genesis and Exodus. Besides these, there is a permanent collection of more than 400 paintings, watercolours, ink drawings, and pastels. It is one of the world’s most highly-regarded contemporary art museums. It seems Chagall himself was able to participate in the gallery’s design while he was still alive.

The Hamburger Bahnhof is an art gallery to be explored on a Germany vacation. It has been converted from a former railway station serving trains between Berlin and Hamburg, and is one of the oldest station buildings in Germany. It’s an 1840s Neo-Renaissance building I suppose is reminiscent of the Musee d’Orsay in Paris, which had the same conversion. The exhibits feature modern and contemporary art including works by artists such as Anselm Kiefer, Robert Rauschenberg, and Andy Warhol. It is one of the world’s most highly-regarded contemporary art museums with a collection of 2,000 works by around 150 artists. There are 60 sketches from Andy Warhol.

Sammlung Boros, Berlin, Germany
The Sammlung Boros is a fascinating and definitely unusual art space. Its venue is a bunker originally constructed by the Nazis in 1943 to house 2000 people. It consists of 120 rooms on 5 floors. An art enthusiast purchased the bunker for his private collection in 2003 and converted it into a gallery, exhibiting a permanent collection of works by lesser-known artists, although there are installations by the famous Chinese art creator, Wei Wei. It now houses one of Berlin’s finest contemporary art collections.

Fondation Louis Vuitton, Paris, France
Fondation Louis Vuitton is an art museum and cultural centre sponsored by the Louis Vuitton organization of France. The building was designed by the architect, Frank Gehry, at great expense, and is located close to Bois de Boulogne Park. It is a remarkable building with 11 galleries and its architectural theme is the sails of a sailboat floating in the wind. The art is contemporary (from the 20th and 21st centuries) and includes works by Michel Basquiat and Jeff Koons, as well as many other modern artists – all to be enjoyed on your Europe vacation.

The Carlsberg Glyptoteket, Copenhagen, Denmark
The Carlsberg Glyptoteket art museum in Copenhagen contains the personal collection of Carl Jacobsen (1842–1914), the son of the founder of the Carlsberg Breweries. It is more than an art gallery as its exhibits include everything from ancient Greek, Roman, and Egyptian sculptures to works by the modern sculptor, Rodin (considered the most important outside France), and an extensive collection of French and Post Impressionists as well as Danish Golden Age paintings. In fact, it has more than 40 works by Gauguin. Additionally, there are paintings by artists such as Picasso, Miro, and Giacometti, all to be enjoyed on a Europe vacation to Denmark.