This was originally published in the Globe & Mail newspaper in conjunction with Jordan Tourism, written by Heather Cleland. You can visit the original Globe article here, or visit Heather’s blog here for more stories. We’ve worked closely with Jordan for over a decade, and feel this message still strongly applies to this beautiful country.

A light breeze rustles my tent’s heavy canvas walls and I can tell, even in here, that the moon outside is full and brilliant. Crickets chirp just like they do back home. A few Bedouin men chat nearby in Arabic – a robust, tumbling language that, when you can’t make out the words, sounds more like a hummed, sombre lullaby than a conversation. If I ignored the news, I’d have no idea that I am in the middle of a country nearly surrounded by war and upheaval.

“The biggest problem Jordan has,” my guide Kamel al-Jayusi told us two days before, as we pulled out of Queen Alia International Airport in Amman, “is being in the middle of the Middle East.” He likens the country to a quiet house in a noisy neighbourhood. While Syria, Israel and Iraq – all of which share borders with Jordan – struggle through civil wars and political uprisings, Jordan has stayed relatively quiet, welcoming refugees from Syria at an astounding rate, and for the most part minding its own business.

Tourism in Jordan has waned in recent years in light of the surrounding tensions, but the country’s major attractions such as Petra and the Dead Sea still draw crowds (albeit smaller than they have been in the past). Despite my own hesitations about heading to the Middle East at a time like this, I wanted to see these wonders for myself. As it turns out, it was a quieter, more remote part of the country that revealed a peacefulness I had not expected to find in this part of the world.

After a couple nights in Amman, I head into the Jordanian wilderness to the Rummana Campsite in the heart of the Dana Biosphere Reserve, which spans 308 square kilometres of varied landscape, from rugged limestone and sandstone ranges to desert plains. The seasonal camp of 20 large canvas tents sits on a small plateau overlooking the Rift Valley.

The next morning, a bus drops my group 45 minutes from the campsite, beside a switchback road just outside the village of Mansoura. Eighteen kilometres away and 500 metres down, our next stop, Feynan Ecolodge, awaits. Our guide, Mohammed Daifallah, points out across a vast expanse of sandstone mountains that look like heaps of dried-up brown sugar, dusty and crumbling under a brilliant blue sky. That’s where we’re going, he tells us.

The bus takes off in the direction it came. It’s barely 9 a.m. and already the sun is daring us to do this.

We trek down the road until the pavement ends and the hills tower above us. Bushes of bright pink oleanders line the edges of the pebbled valley floor – two signs that the little stream that trickles down the middle has a feisty side. Rain, usually between January and March, can trigger flash floods that might raise water levels up to nine metres for a day.

This is Wadi Ghwayr (wadi is the Arabic word for valley and the country is full of them). We crisscross the stream and hop over boulders, and pretty soon the mountain walls close in on us as the stream leads us into a towering sandstone slot canyon. Walls up to 300 metre high block out the sun, bulging here and there, flowing around bends laced with swirls of oxidized sediment. At times, the stream pools and we trek through knee-deep murky blue water.

A couple hours in, we reach an impasse. The stream seeps under boulders that leave us at a 2.5-m ledge overlooking a three-metre-deep pool. A massive rock sits wedged between the walls of the canyon 30 metres above. The only way forward is to jump and then swim. Three local boys are already there and one assures me it’s deep enough, though his smile reads more like a dare than a promise. I hesitate, but take the plunge into frigid water. My toes don’t touch the bottom, but after a few strokes my knees brush rocks and I stand up again.

Just beyond the pool, the canyon widens again and palm trees reach down from above. The stream persists despite the widening wadi that now lets the sun in, but not for long. When the stream peters out as we leave the valley, we carry on without it. I trek along behind Mohammed until he points up a crevasse that juts into the hillside. It’s the continuation of the trail, but I would never have known it without him. I shrink into a patch of shade and douse myself in water. Mohammed clearly knows the lay of this land – he was born in a cave not far from here. He wanders off to the side, positions himself toward Mecca and prays as we wait for the others, so they don’t miss the exit.

It’s pushing 3 p.m., but it feels as if the sun has lingered at its noon-time height just to see if we’ll make it. We do, and just over the hill, just as Mohammed promised, we can see Feynan at the end of a dusty track. 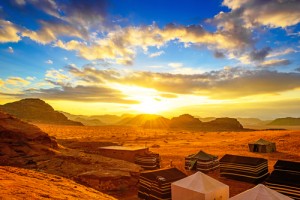 The lodge is seven kilometres from the nearest paved road, so most people don’t cruise by in their own car, but few arrive by way of Wadi Ghwayr. Most drive as far as the village of Qurayqura, where lodge staff transfer them the remaining seven kilometres on a dirt road through the desert. (I’ll go back that way in the morning.)

The 26-room lodge has little electricity – only in the bathrooms, at the front desk and a bit in the kitchen, and all of it is solar generated.

At night, Feynan is lit by candles made at the on-site candle workshop. Almost all of the 25 staff members are part of the local Bedouin community.

That night, on the rooftop terrace, we can hear a call to prayer echo off the surrounding desert hills. Once darkness falls, one of the staff sets up the lodge’s new high-powered telescope. We take turns peering through at what looks like a glow-in-the-dark sticker of Saturn, rings and all. We joke about how it can’t be real, it seems so cartoon-like.

Three-hundred kilometres away, Syria is fighting itself inside out as tensions leak out the north into Turkey and refugees spill out the south into Jordan. There’s unease to the northeast in Iraq and to the west in Israel. But here, in the middle of Jordan, in the middle of the Middle East, I stare up at Saturn and marvel about how something so far away, so abstract, can look so perfect close up. 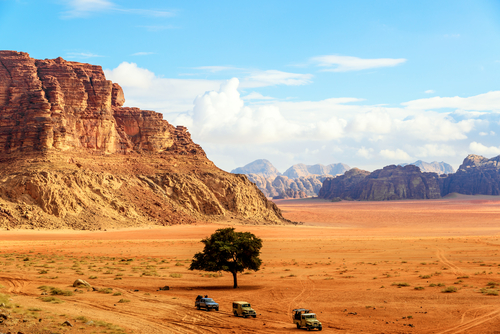 Staying safe: The Government of Canada advises travellers to Jordan to exercise a high degree of caution, especially in areas close to Jordan’s borders with Syria, Israel and Iraq. For more information or to register your trip to Jordan with Foreign Affairs, visit travel.gc.ca.

Feynan Ecolodge: Recently selected as one of the top 25 ecolodges in the world by National Geographic Traveler. Rooms start at about $90, including breakfast. Lunch and dinner can be arranged, as can hiking and transport options.

Rummana Campsite: Managed by the Royal Society for the Conservation of Nature (RSCN), and is open from March 1 to Oct. 31. The site is equipped with a kitchen (meals available with prior arrangements), showers and toilets.

What to do: Hiking in the Dana Biosphere Reserve can be arranged through the RSCN. Guests of Feynan can arrange guides and trips through the lodge. Some routes require guides, while others can be self-guided.

All Travel Ideas to Jordan