There are few better places to head to on a foodie vacation than Southeast Asia. In Southeast Asia, food is cheap, abundant, and, most importantly, delicious. No matter which country you head to, you’ll find an incredible diversity of flavours and styles that won’t set your wallet back, but will send your taste buds reeling. No matter the length of your trip and the extent of your journey, you’ll find enough variety to keep you satisfied during your Southeast Asia tour.

A Changing Food Scene in Bangkok

While every destination in Southeast Asia has street food worth celebrating, no country comes close to the variety and flavour offered in Thailand. Bangkok alone is a foodie’s paradise. Its gourmet cuisine scene is ever expanding, with more international celebrity chefs opening up restaurants every day, and rumours of Michelin stars soon coming to the country. However, it’s at ground level that you’ll find the most authentic flavours and experiences. Sadly, Bangkok’s street food scene is undergoing rabid and unwelcome change.

In April 2017, the military junta-ruling Thailand issued a ban on street vendors in public places, citing a desire to maintain “order and cleanliness” in the same manner as Singapore. This is a great blow to arguably the best city on the planet for street food. Even though it’ll mostly affect the major streets of the city, and not areas like Chinatown, it’s still a great blow for the world’s street food capital.

Traditionally, Bangkok streets have bustled with food carts and vendors every day of the week, except Mondays, when street cleaners sweep the streets and the carts clear a path. You’d typically find street food in every district in Bangkok, with Chinatown (Yaowarat), Old Town (Banglamphu), and Saphan Lueng offering some of the best experiences. While it’s unclear what the fallout of this current crackdown on street food will be, it won’t change the incredible flavours conjured by Thai cooks.

The variety of street food dishes in Thailand is dizzying and there are few wrong choices you could make when you head on a trip to Thailand. However, there are some essentials you need to try, even if you have to search outside of Bangkok, Chiang Mai, or Chiang Rai to find them. In Bangkok, the tourist havens of Chinatown and Khao San are your best bets for finding foreign-friendly street food.

Probably the most famous street food in Thailand is pad thai, which consists of stir-fried rice noodles, eggs, and tofu, served with red chili peppers, chopped roasted peanuts, and meat like chicken or shrimp. You can find pad thai most anywhere in the country, but I remember there being some particularly good stalls outside Wat Pho, where the famous Reclining Buddha statue resides. Hopefully you can still visit these stalls even after the government fully implements the street cart ban. Also ubiquitous and delicious is satay, which is meat wrapped around a bamboo stick, grilled, and then served with peanut sauce. Satay originated in Indonesia, but Thailand has completely made it its own.

For Thai dishes less familiar to Globetrotters from restaurants in North America, you’ll want to try dishes like tom yum goong, som tam, and khao gaeng. Tom yum goong is a spicy and sour soup with a broth of lemongrass, kaffir lime leaves, fish sauce, and crushed chili peppers. It conventionally contains shrimp as well, but shrimp isn’t essential to the broth. Few things are more satisfying than a bowl of tom yum goong at the end of a hot day, where your shirt is sticking to your back and you could drink a river dry for thirst. Yes, you read that correctly – I said it’s great on a hot day. While North Americans usually think that cold food is necessary on hot days, people in Southeast Asia understand that hot broth can be incredibly refreshing on a muggy day.

Som tam is a green papaya salad that also has peppers, beans, basil, lime, garlic, and peanuts. It’s refreshing, light, but can also be incredibly spicy, especially for a salad. Khao gaeng literally means “rice covered with a topping,” and usually refers to the curried rice and curry stir-fries common in Thai cooking. Curries in Thailand incorporate curry pastes, peppers, and coconut milk, and are often named after their colour, such as red, yellow, and green curry.

In the north, such as Chiang Mai or Chiang Rai, you’ll want to try khao soy, a northern delicacy that combines a coconut milk curry sauce with fried chicken and crispy egg noodles. It’s hard to overstate how delicious khao soy is.

The Fresh Flavours of Vietnam

While Thai food is known for its spices and sauces, Vietnamese food is more renowned for its fresh herbs and incredibly layered flavours. Vietnamese food incorporates many aspects of Chinese cooking, but it shouldn’t be considered an adjunct to Chinese food. It’s entirely its own cuisine, with a wealth of flavours to discover on a Southeast Asia tour.

Street food in Vietnam splits the difference between tasty grilled treats and fresh herbs and ingredients. To find the country’s best street food, you’ll want to head to its two largest cities, Hanoi and Ho Chi Minh City (formerly Saigon), although other major cities like Hue and Danang have plenty to recommend too. In Hanoi, you’ll want to stick to the Old Quarter to find the best food, while District 1 and 10 in Ho Chi Minh City are your best bets for plentiful street food.

The essential Vietnamese street food dish (and food dish in general) is pho (pronounced “fuh”). It might be strange for North Americans to think about soup being a street food dish, but unlike in New York or Toronto, people sit down to enjoy street food in Vietnam, so eating soup on the street is not strange at all.

Pho consists of a clear broth, rice noodles, fresh herbs, chilies, and meat like beef (pho bo) or chicken (pho ga). It’s a breakfast staple across Vietnam and you can find it at street stalls or restaurants anywhere you go in the country. There will be differences in the flavour depending on where you are in the country. Generally speaking, pho in the north is more savoury, while pho in the south is sweeter. No matter where you find yourself, plunk down on a plastic stool on the side of the street and slurp on this delicious soup that’ll fuel you for the whole day.

Banh mi is a close second when it comes to essential Vietnamese street foods. This baguette sandwich comes in all manner of combinations depending on whether you’re in the north or the south, but it’ll always consist of some combination of meat, marinated vegetables like carrots and radish, cilantro, chilies, and chili or MSG sauces served on a baguette. In the north, the meat will often be more processed, while in the south you’ll find lemongrass pork or pork meatballs as toppings. Banh mi literally means bread or baguette in Vietnamese, but it’s used to refer to the specific baguette sandwiches sold as a popular street food throughout Vietnam, although the international conception of banh mi comes from Ho Chi Minh City.

In Hanoi, there are few street food dishes more popular than bun cha. This dish consists of pieces of grilled meat or seafood served on cold rice noodles alongside herbs like mint and cilantro, pickled vegetables, and seasoned fish sauce. The dish is great on days hot and cold, as its mixture of savoury flavours and fresh ingredients is delicious no matter the season.

Other popular Vietnamese street food dishes are banh xeo, which are crepes filled with meat and bean sprouts and fried to a crispy texture in a wok, and bun bo hue, a delicious soup consisting of lemongrass, chili peppers, and thick cuts of meat. Fermented shrimp paste gives the soup its unique flavour.

The Other Street Cuisines of Southeast Asia

Thailand and Vietnam might dominate the Southeast Asian street food scene, but that doesn’t mean the less-visited countries have nothing to offer. On the streets of Phnom Penh and Siem Reap in Cambodia you can enjoy lok lak, which are strips of beef served on a salad of tomatoes, lettuce, raw cucumber, and onions, or fried chive cakes, made from rice flour and chopped chives. If you want something more foreign to western palettes, try bobor, a chicken rice porridge served at breakfast, or fish amok, a curried fish that’s steamed in banana leaves until it almost has the consistency of mousse, falling apart at the touch. Many people consider it to be Cambodia’s national dish, so it’s must-try on a trip to Cambodia.

In Laos, try khao tom, which is sticky rice, black beans, and fresh coconut cream steamed in banana leaf parcels or kaipen, which is algae from the Mekong River that has been dried, flattened, fried, and topped with vegetables or sesame seeds. You can find these foods at most any stalls in Luang Prabang and Vientiane. In Malaysia, try variations of satay or assam laksa, a sour fish noodle soup that’s popular as a comfort food.

If you’re heading on a Southeast Asia tour, it’s essential that you try the street food and experience the culinary scene at ground level. You won’t find more authentic flavours or reasonable prices anywhere else. While you might have doubts about the cleanliness of the stalls or the authenticity of something typically considered fast food in North America, rest assured, street food is safe and authentic. For peace of mind, choose stalls that are popular with locals. This ensures that the food is safe (or else locals wouldn’t keep eating there every day) and that the flavours are genuine (as they’d know).

Street food is one of the highlights of a trip to Southeast Asia. You can spend your days in the streets, among the locals, enjoying the bountiful flavours of this remarkable region. 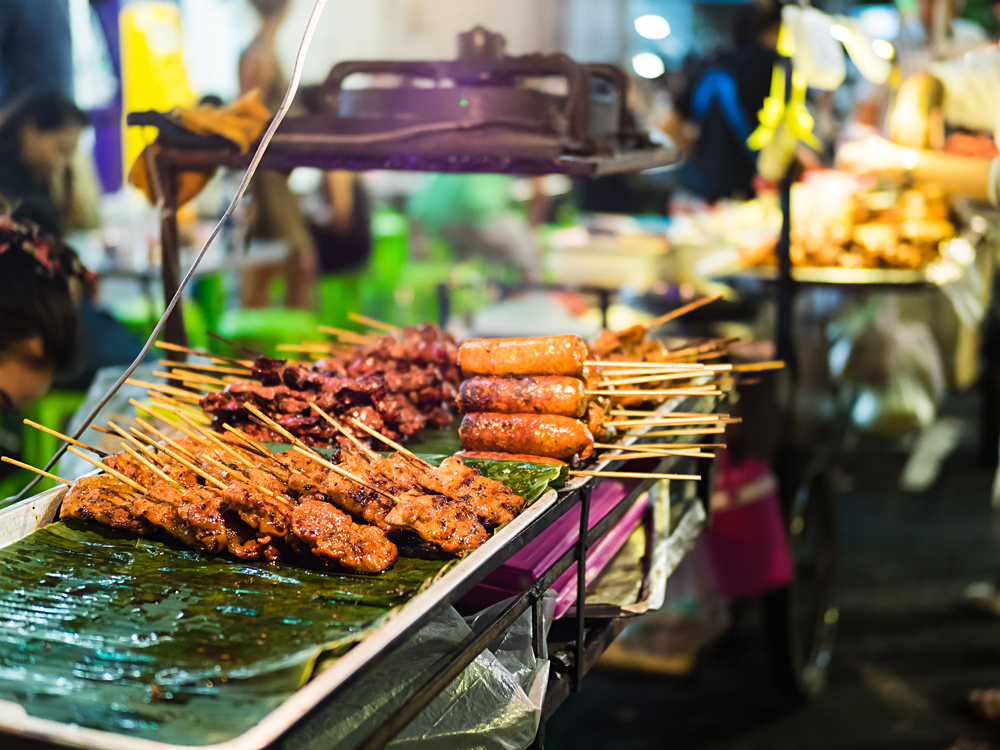