Ethiopia is quickly emerging on the travel scene, and its alluring ancient sites, nomadic tribes, and delicious cuisine and coffee make it a fascinating and off-the-beaten-track destination. Ethiopia is a land of extremes, characterized by remote and wild places. Some of the highest and most stunning places on the African continent are to be found here in cradle of civilization. Take an Ethiopia tour and embrace the spirit of Africa at its most pure and raw.

Fascinating Tribes
Ethiopia is home to some of Africa’s most fascinating tribes. The Mursi, Hamer, Konso, Karo, and Dorze are each distinct and beautiful. Women of the magnificent Mursi tribe insert five-inch decorative plates into split lower lips for beauty. Hamer tribeswomen feature tightly-knit braided hair covered in red earth and butter. Encountering some of these tribespeople in a respectful way can be an illuminating and captivating cross-cultural experience.

The small town of Lalibela is Ethiopia’s iconic attraction. The 12th-century UNESCO-designated churches are carved into the dry ground. Navigate a network of trenches and alcoves to witness mystic ancient rituals. Inside the atmospheric altars you’ll see local people deep in chant and prayer. Don’t miss the nearby markets, they’re a great glimpse into the authentic culture of Ethiopia. 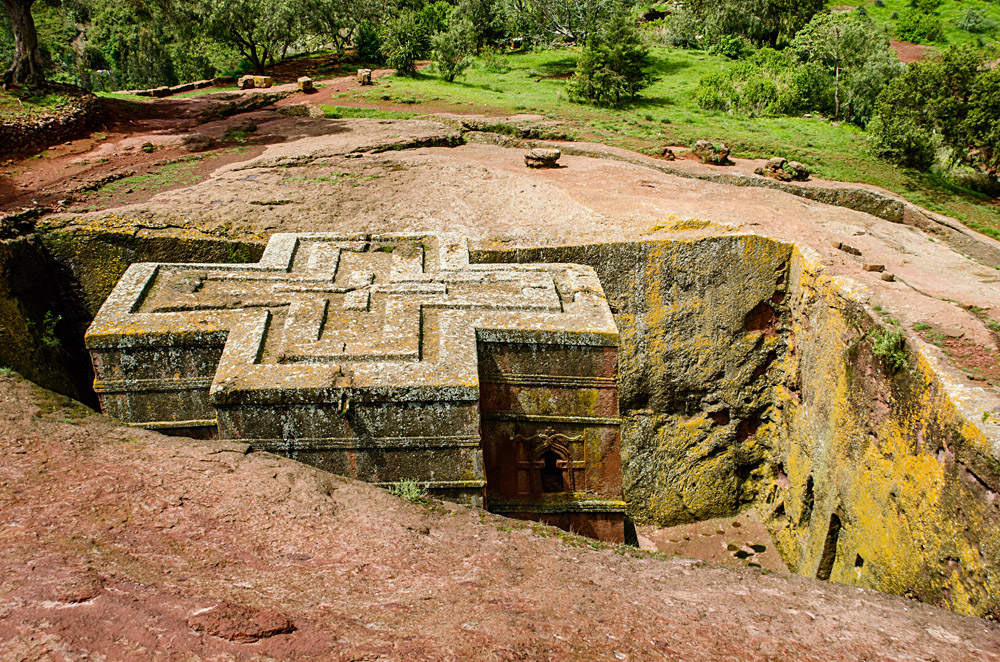 Aksum’s Ark of the Covenant

Through the centuries, Ethiopian Christians have claimed that the Ark of the Covenant rests in a chapel in the small town of Aksum, in their country’s northern highlands. Aksum was once the capital of Africa’s oldest empire, dating back to 400 BC. This UNESCO-protected site claims to house the most fabled biblical relic of history. The Ark of the Covenant is said to inhabit the Chapel of the Tablet, though, mysteriously, no one is allowed to see it. Legend says that the ark has been guarded by a succession of virgin monks who, once anointed, are forbidden to leave chapel grounds until they die.

Gondar sits at 2133 metres above sea level and at one time was the capital city of the Ethiopian empire. The ancient castles and palaces of Gondar, known as Fasil Ghebbi (Royal Enclosure), are a UNESCO World Heritage site, founded in 1635 by Emperor Fasilides. This fortress city is the main attraction in Gondar and northern Ethiopia, and is noted for Fasilides’ Castle. It is also where you’ll find the decorated Debre Birhan Selassie church, which has a gorgeously painted ceiling of angels. Inside Gondar are incredible markets flavoured with Arab and Baroque influences. Check out the Empress Mentewab pool, with its fig tree roots cascading down the walls, and its luscious gardens filled with African birds.

Addis Ababa
Tradition meets modernity in this slightly under-the-radar capital city. Strolling the streets here is taking a journey back in time. Though primitive in many ways, it has modern cafes, plenty of jacaranda trees, and an atmosphere of emerging optimism. Addis Ababa has a number of multinational chain hotels, as well as many museums, including Ethnological Museum, located within Emperor Haile Selassie’s former palace. Another highlight is the National Museum of Ethiopia, whose collection ranks among the finest in Sub-Saharan Africa.

The Grandmother of Humanity
Nicknamed the “Grandmother of Humanity,” Lucy is a 3.2 million-year-old skeleton. She is the most complete skeleton of an early human ancestor ever discovered. “Lucy” acquired her name from the Beatles’ song, Lucy in the Sky with Diamonds, which was played loudly and repeatedly in the expedition camp after the excavation team’s first day of work on the recovery site. The Lucy skeleton cast is preserved and on display at the National Museum of Ethiopia in Addis Ababa.