Stuck for things to do in South Africa? Unthinkable! But if you do want to spice up your vacation (Perhaps literally. Foodies, take note.), here are some popular, distinctly South African experiences away from the tourist sights that will bring a touch of local flavour on your trip to South Africa.

When it comes to southern hemisphere wines, let others keep their snobbery! You’ll be too busy enjoying the bold flavours of local reds including Cabernet Sauvignon, Merlot, and Shiraz. Don’t skip over the whites, which in Stellenbosch tend to include Chardonnay, Sauvignon Blanc, and a certain amount of Chenin Blanc.

Then, there’s Stellenbosch itself, a university town where rocky mountains tower in the distance, providing a dramatic backdrop. Even if it doesn’t enhance the flavour, it certainly compliments it well. Best of all, Stellenbosch is located less than 30 miles from Cape Town.

Just a little beyond it lies the Franschhoek Valley, where French techniques were first brought to South African winemaking.

2. Spend a Few Days Holidaying on the Coast with the South Africans

Many foreign visitors on a trip to South Africa make a beeline for Cape Town or Kruger National Park, and fair enough, they should. But like most big tourist destinations, these only offer a certain perspective, particularly if you want to see the “real” South Africa at play.

Follow the coast to Camp’s Bay, Clifton, or Durban, and everything changes. South Africans love the beach, and they know they’ve got some of the best beaches in the world. Most are concentrated either on the Western Cape or around KwaZulu-Natal, where Durban is located. The year-round temperate climates mean there’s never a bad time to go, and South Africa’s variety of wildlife extends to its coastal areas, so you never know what you might see.

Speaking of wildlife, it is extremely unlikely you’ll personally encounter a shark while bathing at a South African beach. Nonetheless, the country is known for its great whites, and many beaches employ a code of “shark flags” to keep bathers safe. Of course, if you want to see the sharks, an organized cage-diving trip from Cape Town or Durban makes a thrilling addition to any South Africa vacation.

To sum up South African cuisine in one paragraph would be impossible. Consider the country’s influences, from traditional African, to European colonization, to the spicy flavours brought by immigrants from across Asia, and it’s clear there’s plenty to try either with, or without wine (Though of course, you’re going to try them with, aren’t you?). Here are just a few local favourites to get your tastebuds dancing on your trip to South Africa. 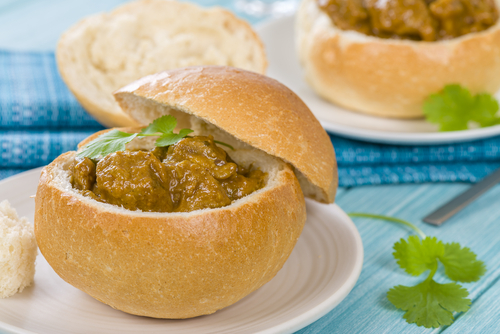 4. Indulge with at Least One Lodge Experience

We know an African safari can be an expensive exercise, particularly if you go for private game reserves. Add in staying at a luxurious game lodge, and the cost climbs even higher. In many cases, however, it’s worth it.

Over 20 lodges are positioned either on the edge of, or within Kruger National Park, while more dot various regions of South Africa from KwaZulu-Natal to the Western Cape. South Africa is among the most comfortable countries you can visit for a safari, but having that extra layer of luxury, particularly out in the bush, can make a big difference to your trip.

A good safari vacation involves early starts for game drives, and often a considerable amount of down-time while the animals rest. Each lodge offers its own slightly different facilities, style, and emphasis, so choosing the right lodge can turn a great safari into a terrific one, more than justifying the extra cost on your trip to South Africa.

Barbecue time! Originating in the Johannesburg townships, this community tradition has spread across country, race, and economic class. Pronounced “bry” (as in “cry”), it is as much a social experience as a culinary one. It’s become so much a part of South Africa’s identity that September 24 is National Braai Day. Yet for all its political implications, this remains a decidedly democratic holiday, enjoyed by all.

A neighbourhood braai can feel not unlike a big potluck, though of course, the meat is the star. Expect the previously mentioned boerewors, skewers known as sosatie, kebabs, steaks, marinated chicken, pork, and lamb of various kinds… most any popular meat can wind up on the braai. Even seafood is popular in the coastal areas. You can expect to see a lot of chakalaka and pap served as well, as these are the most popular dishes to balance out all that delicious meat.

Work your way through these five ideas on your trip to South Africa, and you’re still just scratching the surface. But it’s a great way to start.