I have many favourite travel memories from Greece as when I was 23 I ended up working on the island of Santorini for the summer. I had planned to live abroad in England, but decided to vacation in Greece before heading to the grey skies of London. After spotting “English-speaking staff wanted” signs around Santorini and with no plans for work or accommodation in England I decided to stay on the island. This was the start to a life-changing summer spent as a cocktail waitress on the most romantic island in Europe. Having spent seven months on the island working the busy tourist season, serving holidaymakers, wedding groups, honeymooners, and backpackers, witnessing Eurovision, the hysteria of the World Cup, exploring the island, falling in love, and experiencing the drama of island life, I have so many stories I could fill a book.

One of my favourite things about working as a waitress on one of the most famous islands in the world was being the island expert and giving customers “Tracy’s Tips.” I would sit down with my cocktail-sipping patrons and draw a map of the crescent moon shaped island on a serving napkin to pinpoint all my secrets spots: where to rent a moped, where to eat, how to get to little inland villages, the best place to watch the sunset, and where you find the best wine.

Sometimes my boyfriend and I would round up friends we had met and give them our personal tour of the island. One of my favorite “Tracy Tours” of Santorini included two girlfriends who were visiting from Canada, a mother and son duo from Nova Scotia, my Portuguese bartender and his Greek girlfriend, a young man who was finishing off a vampire novel while living on the island and his visiting mother, and a vacationing couple from England.

We all rented scooters and quad bikes and were a long convoy of island explorers. We didn’t just take them to the typical Santorini tourist spots such as the Red Beach or the village of Oia. We took our friends to places we discovered from being island locals. We raced up to lookouts with white churches and windmills you could climb in and to the top of the mountain where Barbara Streisand is rumored to have had a house. We visited a small winery that has been in the same family for over 600 years and the hilltop remains of a Venetian castle in the village of Pyrgos, with narrow streets draped in bougainvillea.

We ended our journey not on the sunset side of the island where the tourists flock, but we took our guests to the opposite side of the island to an off the beaten path restaurant you would only find with a vehicle and exact directions. We were the only diners and took up a long table on the balcony with waves crashing on rocks below. We ordered almost everything off the small menu and shared family style so everyone could taste all the delicious Greek offerings and pass around carafes of local wine.

I spent this summer working every night serving and chatting to tourists and my days exploring every inch of the island. However, my favourite memories are always when I was able to share these experiences with new and old friends and show them “my” Santorini. 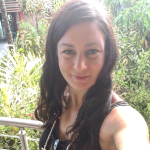 Destination Specialist, Idyllic Islands — Travel has been Tracy's life and obsession since she was young and dreamed of being a flight attendant before she had even stepped foot on a plane. She loves exploring underwater worlds, beautiful beaches, and trekking through jungles, but especially loves making friends, learning new languages, and experiencing a different way of life. She has travelled to over 45 countries, including her favourites of French Polynesia, Colombia, Brazil, Greece, Mexico, Nicaragua, Egypt, Jordan, and Cambodia.