Iceland is one of the most picturesque and wonderful places I have ever visited.

In 2013, I went to see the Ben Stiller remake of the classic 1947 Danny Kaye comedy (and adaptation of the 1939 short-story) The Secret Life of Walter Mitty. Walter spends his life daydreaming about the big adventures he might one day take, yet sadly lives a fairly dull and boring life. The crux of the story is that he gets pushed into an exciting world journey, with a beautiful Iceland stopover. Witnessing amazing cinematography as he travels through Iceland, I couldn’t help but nudge this majestic island further up my travel bucket list.

After moving to Canada from Australia in 2018, I was desperately looking for a way to meet up with family and friends that I had really begun to miss. My sister and one of my best friends were both living in London, England during this time. We found a week that worked and my wife and I planned an epic adventure for the four of us that would see us experience the amazing land of fire and ice and finally check this place off our bucket lists.

A five-and-half hour flight from Toronto, and a three hour flight for my mate and sister from London, saw us land in Reykjavik, Iceland’s capital. We headed straight to the city centre, where our first stop was Hallgrímskirkja, the most recognisable building in all of Reykjavik. We explored the rest of the city by foot and bunkered down for a nice pub food dinner. We didn’t realise prior, but we had actually arrived during the world famous Iceland Airwaves Music Festival, where all the pubs were showcasing new music from local and international artists.

The next day we started our first tour. Our first stop was Leiðarendi Caves where we explored underground tunnels that were created thousands of years ago by the lava flow from a series of volcanic eruptions. Our guide shared some fun stories about trolls that live in the area along with some interesting facts about the minerals that had cooled and become part of the chamber walls.

The second stop, and my personal highlight of the entire vacation, was a drive up to Silfra. This is the only place in the world where you can dive and snorkel between tectonic plates, and because of the way in which freshwater enters the fissure, the water visibility of Silfra exceeds over 100 metres. We put on our wetsuits and then an additional floating dry suit over the top. All rugged up in a gigantic floating suit, we entered the near freezing water and began to slowly float down the waterways. The water is so pure and fresh, there is no problem drinking it, so we had no excuse for not staying hydrated.

That night we were lucky enough to witness the Northern Lights, a spectacle I had always dreamed of.

The next day we started our two day exploration of the famous Golden Circle route. We started again in Thingvellir National Park, then drove up to the Geysir Geothermal area, and worked our way down to the Gullfoss waterfall, all the while stopping to take amazing pictures and videos.

After this two-day trip we ended up in the little seaside town of Vik, where we started our second full-day tour. Picked up by a monster 20-seat truck, we were driven off road on a black sand plateau to Katla Ice Cave. Fun fact: the opening scene of the Star Wars film Rogue One filmed here to depict the planet Lah’mu. Driving up and down giant dunes felt like a roller coaster ride, an absolutely awesome experience. Arriving at Katla Ice Cave we hiked on foot into an opening in the mountains, took some great photos, climbed a few giant piles of black sand, and headed back to Vik.

With our short Icelandic vacation coming to an end, I reminisced about the beautiful scenery and diverse landscapes we were able to experience. Within such a short drive we were able to see volcanic lava caves, black sand beaches, giant moss covered hills, huge glaciers, hot springs, and many more natural phenomenons. The south-west region of Iceland was, and will continue to be, one of the most amazing vacations I have ever been on. 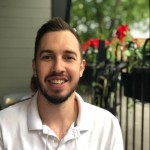 Digital Marketing Manager — Chris's idea of a great vacation is being surrounded by amazing natural beauty and an abundance of fresh air. His favourite destinations are Iceland, Portugal and Thailand, with an honourable mention to his homeland Australia, which is also a nature lover's playground.