Tired of travel shows but still want to Netflix your way around the world? An uplifting cult sci-fi series could be your next armchair obsession.

During this time of physical distancing, we’ve talked a lot about some favourite movies and binge-worthy series to keep our minds globetrotting until we can get back out there for real.

Yet almost two years after its conclusion, there still hasn’t been another drama series to stir our wanderlust quite like Sense8. Created by the always inventive Wachowski Sisters, best known for the hit Matrix films, and J. Michael Straczynski, best known for 90s sci-fi favourite Babylon 5, Sense8 was mind-bending, shamelessly ambitious, refreshingly uncynical, and ultimately… far too expensive. The show’s ultimate cancellation in 2017 after just two seasons triggered probably the most vocal viewer campaign Netflix has seen to date, as the show’s fervent fans – known as ‘Sensies’ – demanded answers to the show’s many, many unanswered questions. Most of those questions would be resolved in a feature-length special released in 2018, while others would remain up to viewers’ imaginations.

What is Sense8 about?

The premise of Sense8 is deceptively simple. Eight strangers at random points around the world begin to realise they can look in on each other’s lives, particularly when emotions are running high. Over time, they learn to communicate, and even share each other’s skills (a conveniently diverse list including an actor, a thief, a computer hacker, a martial arts expert, a professional driver, and so on). Cue the inevitable shadowy organisation that wants to hunt them down and you have one of the most thrilling, if bizarre and utterly bingeworthy shows Netflix has ever produced.

If you’re a globetrotter and caught an episode of Sense8, there’s a good chance you were enthralled before the opening credits stopped rolling. A kaleidoscope of images from each character’s home town – San Francisco, Chicago, Mexico City, London, Berlin, Nairobi, Mumbai, and Seoul – this simple sequence of images gave us the heads up that Sense8 would take us around the world in the comfort of our living rooms. On this, the show never disappointed, with on location scenes celebrating each of its home settings, along with Iceland, Amsterdam, Sao Paulo, and a few others. 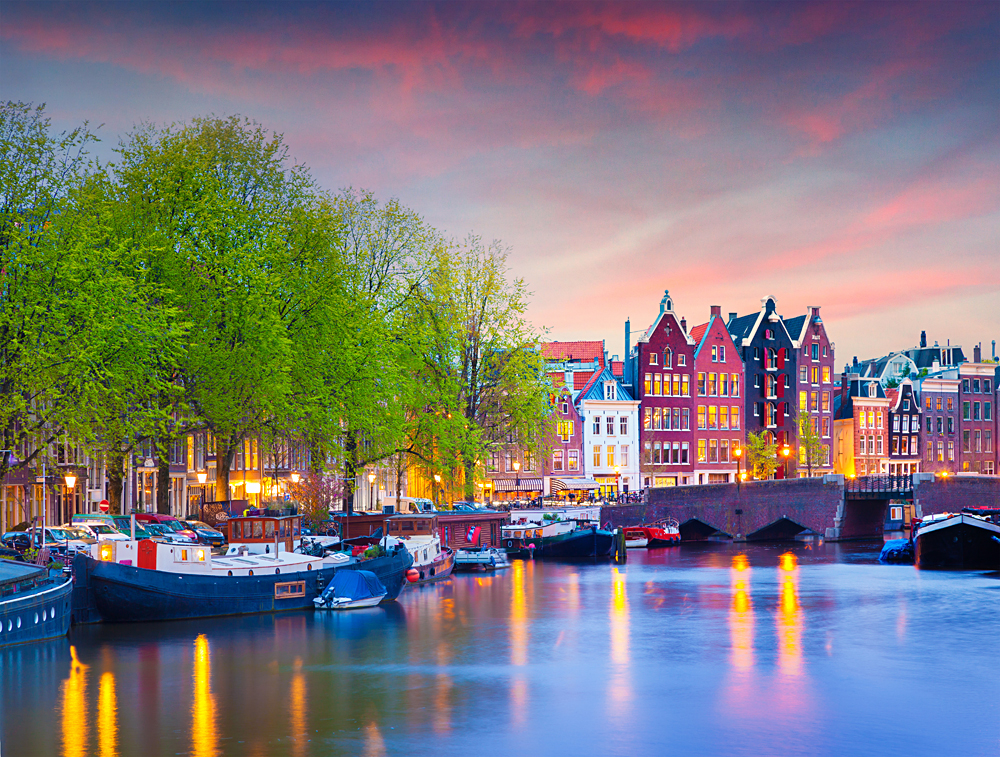 If you’re not used to high-concept sci-fi, maybe keep a pen and paper handy. The plot gets confusing at times, and there are lots of secondary characters to keep track of. Each of Sense8’s eight protagonists is trying to resolve their own drama as their abilities emerge, and how they grow to help one another in doing so is probably the most emotionally satisfying aspect of the show. But underneath that is an obvious, enduring love for each of the cities the ‘cluster’ (the show’s term for its eight characters) calls home.

Where is Sense8 filmed?

Much of Sense8 was filmed on location, capturing some iconic sights and hidden treasures in the process. If you’re a Goway Globetrotter, you might know the Wachowskis’ native town of Chicago (home to Will, a young cop battling father issues), and San Francisco (home to ‘unlucky in all but love’ hacker Nomi) already. So, here’s our take on Sense8’s other key settings, as they’re depicted on the show, and what they’re like to explore in real life.

Mexico City’s cultural influence reaches globally, but taken on its own, it’s a terrific place to explore. Home on Sense8 to Lito, a closeted gay actor whose livelihood in action movies depends on staying that way, Mexico City loves its movies, enshrined at the National Film Museum. This is just one of countless arts museums throughout the city, including the famous Palacio de Bellas Artes. One of Sense8’s most famous scenes, in which the still closeted Lito and Nomi, a trans woman, share a psychic heart to heart, takes place within the Diego Rivera-designed Anahuacalli Museum, which houses Rivera’s personal collection of pre-Columbian art. Chapultepec Park is another of Mexico City’s must visits. Besides the Pillar of Light, featured in the show, it’s home to the National Museum of History and arguably the finest Museum of Anthropology in the world. Lastly? Yes, you can attend a lucha libre match! The one featured in Sense8 takes place at Arena Naucalpan, though Arena Coliseo’s central location makes it more popular with travellers.

In many ways the emotional heart of Sense8, Icelandic DJ Riley seems a bit lost in her adopted home of London. After a violent run-in in with some shady characters, she tries to collect herself on the iconic Millennium Bridge, and in Piccadilly Circus, in the heart of London’s theatre district. Her defining London moment though comes at the top of Primrose Hill, in Greenwich Park, where she receives a much-needed psychic visit from Sun, her Korean cluster-mate. I’ll admit, this is probably my favourite spot in all of London, and watching all eight characters come together in a shared psychic karaoke performance is one of the most cathartic things you’ll see on television. Will also pops into London a few times, trading barbs with the show’s villain in The Shard, London’s tallest building, and in Westminster’s Old Palace Yard.

Closer to Riley’s heart is her native Iceland. The show does a magnificent job of showing off the country’s natural beauty and colours, but honestly, Iceland didn’t need much help! It really is that gorgeous, and we get a whirlwind tour of its landscapes toward the end of Sense8’s first season.

In Sense8’s gritty Berlin, vicious gangsters fight for power under the noses of young clubgoers and free spirits. It’s the perfect setting to follow Wolfgang, the cynical but good-hearted thief who keeps his friends close and his enemies within rocket launcher range (just go with it). But the prevailing mood in the real Berlin, Germany’s scrappy, resourceful, capital is one of optimism, and visitors will quickly see this. Wolfgang meets one of his gang bosses at a moving holocaust memorial – not the famous Memorial to the Murdered Jews of Europe in Mitte, but rather the smaller installation at Berlin’s excellent Jewish Museum. Wolfgang’s favourite public bath and site of one of the show’s more *ahem* memorable scenes is Stadbad Neukoelin, while his Indian cluster-mate Kala sees snow for the first time when she visits him at Monbijoupark, just across from Museum Island on the Spree. What Sense8 captures beautifully is Berlin’s infectious, DIY energy, manifest everywhere from its street art to underground dance clubs.

Hit the streets of Nairobi on your way to an African safari and you’re sure to notice the city’s colourful matatu buses. The backbone of Nairobi public transit, these are just as much an expression of their owner’s personality. In Sense8, one of those owners is Capheus, an idealistic man from the Kibera neighbourhood who has named his matatu Van Damme after his action star idol. Sense8 makes riding a matatu look both dangerous and fun, though in reality, they’re just cheap, colourful, and sometimes noisy transport for locals. Their schedules and routes are also near impossible for foreigners to predict, so you’re better off sticking to cabs, Uber, or private cars. While you’ll probably only spend a day or two here on your way to Kenya’s incredible wildlife parks, Nairobi National Park offers a nice, handy glimpse of what’s out there. Just outside it is the Sheldrick Elephant and Rhino Orphanage, with the Giraffe Centre and Karen Blixen Museum not far beyond that. Be sure to stop in at Uhuru Park, a favourite photo spot for graduating Nairobi students, where Capheus holds his campaign rally in Sense8.

Nobody can accuse India of not being a complex country! In Sense8, the dilemma faced by Kala, a pharmacist betrothed to a man she loves, but doesn’t quite love, in some ways captures the clash between tradition and progress that is ever-present in forward-focused Mumbai. She asks Hindu god Ganesha for guidance at Babulnath Temple, before reluctantly rubbing shoulders with the well-to-do at Mumbai’s chicest hotels. She takes in an art show at Gallery Maskara, near the famous Gateway of India. Just across the bay on their namesake island lie the fascinating Elephanta Caves. The extraordinary architecture of the Chhatrapati Shivaji Maharaj Vastu houses an impressive art and history museum, while the similarly named Chhatrapati Shivaji Terminus remains one of the best examples of Victorian architecture in India. While Kala might struggle to reconcile the old and new India, you can indulge the best of both worlds while in Mumbai.

Arguably Sense8’s saddest and most frustrating story belongs to Sun, a businesswoman and night-time ring fighter who dutifully takes the fall for her brother’s corrupt business dealings. She spends the rest of the series trying to correct that mistake, but for a woman on the lam, Sun certainly takes viewers to some of Seoul’s best sights. She trains with her marital arts instructor at Namsan Baekbeom Square, gateway to one of the city’s most attractive and romantic parks. She looks in on Dongdaemun History and Culture Park with its space-age Design Plaza and vast 24hr market. She’s also paid a psychic visit by Capheus while walking along the picturesque Cheonggyecheon Stream, a favourite with Seoul locals. Despite a sizable portion of Sun’s story taking place inside prison walls, Sense8 does a great job of capturing Seoul’s urban energy, where the traditional is revered alongside the contemporary. You’ll definitely want to make some time however for its architectural and historic star, Gyeongbokgung Palace.