When you think of the Islands of Tahiti, you are probably picturing stunning turquoise lagoons, powdery white sand beaches, and Polynesian culture. But did you also know that Tahiti produces its own wine, rum, and beer, and is an ideal tropical destination to drink your way through.

There are many local options for a beverage in the Islands of Tahiti. With its iconic logo, a young Tahitian woman in a floral pareu, a must try is the Golden Hinano Lager, better known as “the beer of Tahiti.” Brewed in Tahiti since 1955, Hinano has a selection of 3 distinct beers. The Hinano beer is a deluxe, bottom-fermented, golden-coloured lager, with 5% alcohol content and a pronounced bitterness. If you are looking for a beer with character, I suggest trying a Hinano Ambree, which uses aromatic hops to strengthen the complex flavour and leaves a pleasant feeling of freshness in your mouth. The third option is Hinano Gold, created from a successful combination of experience in beer crafting and the selection of the best ingredients, resulting in a light, flavourful bitterness, and a hint of a fruity note.

One of the world’s least-known wine regions is in the Islands of Tahiti, located in Rangiroa, on the Tuamotu islands. Due to the humid climate, Tahiti itself is unsuitable for viticulture, so wines made here are vinified from grapes grown in Rangiroa and, in true Polynesian style, are transported by canoe twice a year. The most widely used wine grapes in Tahiti are Carignan (red) and Muscat Hamburg (white). Both varieties are known for their ability to survive the heat. If you prefer white wine, I suggest picking up a bottle of Domaine Dominique Auroy ‘Blanc de Corail.’ Red lovers will want to try Domaine Dominique Auroy Rose Nacarat.

Moorea is home to Manutea Tahiti Distillery, located between the two bays of Cook and Opunohu. Open to the public, a visit to the distillery is a must. A highlight is a tasting of the fruit-infused rums, with plenty of choice from pineapple to coconut. You can also try their flavoured Vaimana Vodka. This tropical vodka combines a subtle balance of grapefruit enhanced by peppery notes of ginger, simply divine served on the rocks. 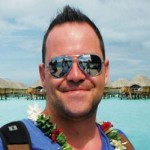 IslandsEscapes Product Manager - At a young age, Mike's family departed on an adventure of a lifetime, moving to Saudi Arabia and travelling throughout the world. When living in Europe as a young adult, Mike decided to create travel memories of his own, which ignited a passion for the industry. He has since travelled to Australia, New Zealand, Tahiti, Fiji, Cook Islands, Abu Dhabi, Dubai, and Maldives with Goway.