Buenos dias! Thinking of adding a different layer to your extended South America or Spain vacation by brushing up on your Spanish? Here are some of the best countries for prospective Spanish learners who still want a great Globetrotting adventure. While we’ve estimated rough “rankings” based on advice from Spanish teachers and schools, your perfect destination for studying Spanish depends on you. Only you know your reasons for wanting to learn Spanish, how far you want to progress, and how you prefer to learn. The key to learning any language is motivation, and if part of your motivation is being in a city you love, or being surrounded by a culture that particularly fascinates you, then the choice is easy. Or maybe you just want to learn the “cleanest,” most easily understood Spanish possible, giving you a new language to take on your future travels. Whatever your reasons, all of the countries below (with one obvious exception) are great places to learn Spanish.

Oh, how far the land of magical realism has come! Thirty years ago it would have been unthinkable to recommend a trip here, much less a longer stay with language study in mind. Now, Colombia is the hot destination in South America, and it’s little wonder. From gorgeous Caribbean beaches in Cartagena to the delicious coffee of Medellin, to testing out your salsa feet in Cali, or diving into the middle of it all in bustling Bogota, there’s something for everyone here. Colombia is affordable, friendly, multicultural, and best of all for Spanish students, relatively light on local colloquialisms that leave other Spanish speakers scratching their heads. The Colombian accent is widely thought to be among the easiest for beginners to understand, so what you hear on the street will mostly match what you learn, and Spanish speakers in other countries will almost certainly be able to understand you. One final plus? Colombia receives just enough tourists to sustain a good tourism infrastructure without feeling over-crowded.

If you studied Spanish in high school, there’s a fair chance it was Mexican Spanish. Besides being the closest option for most US and Canadian travellers, this is the world’s most populous Spanish speaking country, with almost three times the population of its nearest rival, Colombia. That means Mexico’s media – including regional dialects and accents – is widely available, allowing you to get a head start before you arrive. The country’s size and variety also allows you to choose a destination and local culture that fits your personality, whether it’s a beautiful beach locale, action-packed Mexico City, or a traditional town offering colouful festivals (and perhaps, very few English speakers). It might not sound like the most exotic choice for a seasoned North American traveller, but there’s so much to Mexico that you could spend a lifetime exploring here and not see, taste, or understand it all. Affordability is another big factor in Mexico’s favour, and you’ll definitely be able to put what you learn to work when it’s time to come home.

Peru is on many a traveller’s bucket list anyway, so why not stay in super-affordable Cusco longer, studying Spanish? The main reason you might shy away from Cusco is its sheer popularity. While this is undoubtedly one of the world’s most beautiful old cities, where traditional Inca culture still lives and breathes, everyone else who wants to study Spanish in Peru has the same idea. You won’t lack for fellow foreign students to talk to, and that might not be ideal for practicing Spanish. Lima, on the other hand, is rapidly emerging as a largely underrated city destination with beautiful neighbourhoods, friendly, patient people, and one of the world’s top culinary scenes. It’s a fun, affordable city, ideal for a longer stay surrounded by locals – on top of your week in Cusco, where you visited Machu Picchu of course!

Ever dreamt of strutting down Madrid’s Gran Via, feeling like you just stepped out of (or into) an Almodovar film? Nothing spoils that feeling like choking when it’s time to communicate. If you want to communicate in Spain, there are some unique things to know, particularly use of the vosotros form. Still, if your primary interest in Spanish is a better understanding of Spanish culture itself, Spain is the place to go. It’s not the cheapest option, but it’s not madly expensive either, and it’s hard not to love having cities like Granada, Seville, Malaga, Madrid, and others all at your fingertips for weekends away, thanks to Spain’s excellent rail system. Proximity to the rest of Europe is another huge plus, along with the wide range of long stay options. While we heartily recommend visits to both Catalonia and the Basque region, they’re not the best choices for studying Spanish. You’ll certainly find Spanish language schools and Spanish speakers in both, but even putting political implications aside, Spanish won’t help deepen your connection to the local culture as much as it will in other parts of Spain. The prevalence of the Catalan and Basque languages can also make the immersion confusing.

Ah, Argentina! What could be more tempting than a month or two in Buenos Aires, learning to communicate with the stylish locals and dancing your nights away at milongas, all while enjoying all the steak, Malbec, and top notch Italian food you can stand? Buenos Aires is an excellent choice for prospective Spanish students, with moderate prices and a thriving theatre and film scene to help you practice your comprehension while having a fabulous night out. There are some caveats though. The same Italian influence that makes Argentine cuisine so irresistible has left its mark on the local lingo. Be ready for local pronunciation in Buenos Aires you won’t find anywhere else. That includes the rest of Argentina. This vast country features a wide variety of accents. If you want big city benefits without the distinctive Porteno accent (and with fewer English speakers), consider studying in Cordoba or Rosario instead.

Attention, Spanish students on a budget! Hands down the most affordable, action-packed small country in which to learn Spanish is Guatemala. The country is home to incredible Mayan ruins, gorgeous rainforests, small colonial towns offering endless discovery, and yes, enough fine chocolate and coffee to leave you in the world’s happiest food coma. There’s arguably no better country in the world to get a snapshot of Maya, but the prevalence of pre-colonial culture can also present a challenge for Spanish students as you will hear a number of native languages spoken alongside Spanish. That’s by no means a bad thing. What could be more authentic and enriching than learning about Guatemala’s native culture alongside Spanish? It just adds an extra dimension to a trip that already offers endless variety.

Ecuador is the quiet achiever among South American destinations. Its star attraction is the Galapagos Islands, but the extremely affordable mainland is all about cultural immersion and a relaxed pace. It’s an ideal environment for learning Spanish without the safety net of a lot of English speakers. Even in Quito, don’t take it for granted that someone you meet speaks English. Their Spanish however will be easy to understand with relatively few regional differences. Be ready to learn as you go and make some mistakes. Ecuador’s people are among the nicest you’ll meet anywhere, and will receive your attempts in good humour. Plus, you’re literally at “the centre of it all,” with close access to the Andes, the Amazon, and of course, the Galapagos Islands.

It’s no surprise that Costa Rica is already a well-established snowbird destination in Central America, given its well-developed infrastructure and relative safety. If you are planning to stay for a month or more, why not consider adding a Spanish course to get even more out of the experience? Of all the destinations on this list, Costa Rica will appeal most to nature lovers. In fact, the hardest part might be focusing on classes, with all that beautiful rainforest on your doorstep! It’s also an extremely tourism-ready country. This makes getting around a breeze, but it can slow your Spanish progress somewhat if you’re not forced to practice. Urban explorers might also want to choose an alternative destination. Nobody comes to Costa Rica to stay in the city.

While remaining fiercely proud of their country, most Chileans are also frank with prospective Spanish students about trying to learn in Chile. Chilean Spanish, particularly in Santiago, is a kind of rapid-fire Spanish you won’t hear anywhere else in the world, and it’s famously tough work for beginners. That shouldn’t deter you however, if your heart is set on reading (or reciting?) Neruda in his native tongue. Santiago is also one of the world’s most under-appreciated cities for urban explorers. If Buenos Aires is the Paris of South America, Santiago is its Berlin, packed with underground art, theatre, and nightlife offerings. That means the best of Santiago can be tough to find without at least a little Spanish. If you can keep up with the local lingo, the rewards of learning here are great. Further afield, the deserts of Atacama and the peaks of Patagonia inspire awe in any language.

Want to drive yourself crazy in the shortest time possible? Try learning Spanish in a Portuguese speaking country! Okay, we mention Brazil and Portugal only to stress that Spanish and Portuguese are not mutually intelligible, particularly if you’re not a native speaker. That’s not to say one is completely useless for understanding the other. The two feature many cognates and grammatical similarities, but considering how different Brazilian and European Portuguese sound to each other, it doesn’t take long to realize how different they are to Spanish. Portugal is a great spot for an affordable, culture-rich European vacation or long-stay, while Brazil offers an endlessly diverse, fascinating, and beautiful destination in South America. Just don’t book a flight to Lisbon or Rio hoping to improve your Spanish.

Final Tips Before You Go 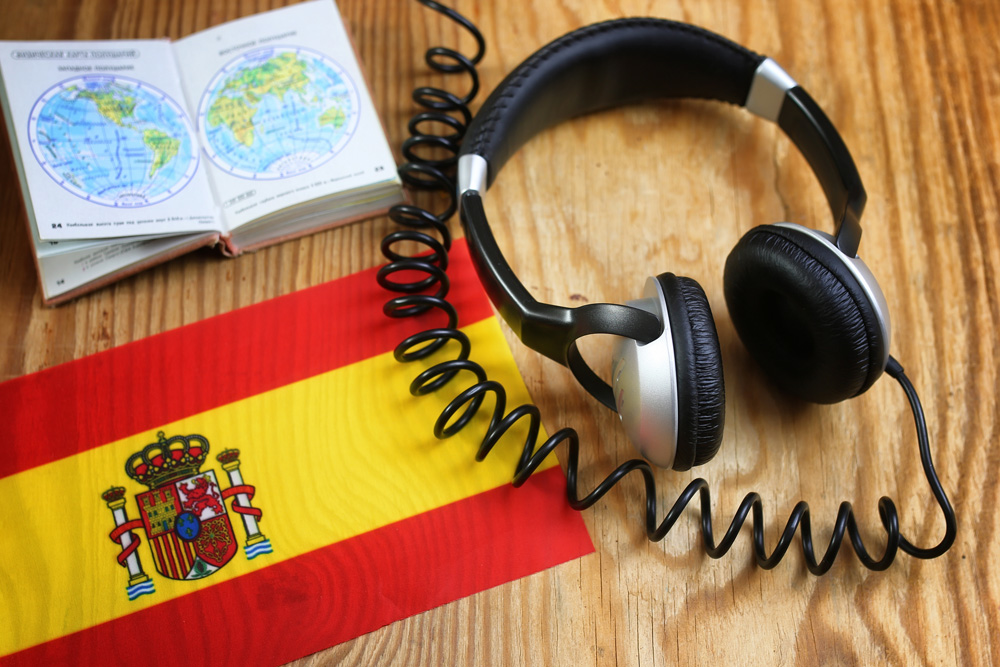