There is a saying that Alice Springs is the closest Australian town to every beach in the country. That’s true. However the nearest beach is actually 1500 kilometres/930 miles away. The point is, Alice Springs is in the geographic centre of Australia and almost equidistant from both Adelaide in the south and Darwin in the north. With so many attractions offered, why not plan a visit to Alice Springs, on travel to Australia, on your next vacation Down Under.

The town was named after Lady Alice Todd, wife of Sir Charles Todd, a British astronomer, meteorologist, and electrical engineer. It’s also affectionately called “The Alice” or simply “Alice.” The last time I was personally in Alice Springs, on travel to Australia, there was a sexy slogan being used to promote the town in the off season – “See Alice While She’s Hot.” The temperature can vary dramatically between winter and summer.

The central Australian desert around Alice Springs was the home of the Arrernte Aboriginal people for thousands of years prior to the arrival of the first Europeans. In fact, archaeological evidence suggests that the area has been occupied for possibly 30,000 years. This makes Alice Springs one of the world’s oldest, continuously inhabited places. The Arrernte have established numerous conservation areas around Alice Springs, with names such as Emily Gap, Anzac Hill, and Heavitree Gap. These historic and cultural sites attract a steady flow of visitors looking for interaction with the original Aboriginal culture of Australia.

The influence is certainly to be noticed, on your travel to Australia, in the large number of art galleries and centres which offer traditional and contemporary indigenous art displays.

It never does any harm for a tourist destination to be mentioned in a best-selling book. Here are three examples of Alice Springs catching the eye of famous writers:

So What are the Attractions In and Around Alice Springs on Your Travel to Australia?

Physically, Alice Springs’ location is striking as it has the MacDonnell Ranges as a rugged but beautiful backdrop, and you don’t have to venture far to find yourself among ochre-red gorges and pastel-hued hills.

Otherwise, let’s start with the Araluen Cultural Precinct. Here you will encounter an array of galleries, museums, sculptures, and sacred sites offering a unique experience of Aboriginal art, culture, and heritage.

Then there is the Alice Springs Telegraph Station Historical Reserve, which used to relay messages between Darwin and Adelaide, and gives a particular and fascinating glimpse of the town’s European beginnings. Built along the Overland Telegraph Line in the 1870s, the Telegraph Station continued to operate until 1932. Now, the building has been faithfully restored.

The Museum of Central Australia contains a Natural History collection and recalls the days of “megafauna,” when hippo-sized wombats and 3 metre/10 feet tall flightless birds roamed the land. Among the geological displays are meteorite fragments and fossils.

The Central Australia Aviation Museum is housed in an aerodrome with displays on pioneer aviation in the Northern Territory, including Royal Flying Doctor planes. The most interesting exhibit is the wreck of the Kookaburra, a tiny plane that crashed in the desert in 1929 while searching for Charles Kingsford Smith and his co-pilot, who were eventually rescued.

The Alice Springs Desert Park was originally created to educate visitors on travel to Australia about the many facets of the surrounding desert environment. It features creatures of central Australia all on display in one place, and is predominantly an open-air exhibit which faithfully recreates the animals’ natural environments in a series of habitats such as inland river, sand country, and woodland. It contains three separate walk-through desert habitat areas accessed through a 1.6 kilometre/1 mile trail.

Informally known as The Flying Doctor, this is one of the largest and most comprehensive aeromedical organizations in the world. It provides emergency and primary health care services for those living in rural, remote, and regional areas of Australia. It is a not-for-profit organization which provides health care to people who cannot access a hospital or general practice – due to the vast distances of the Outback.

The Royal Flying Doctor Museum is located in the original Radio Station House. Here, you can find out what it is like to be inside one of the aircraft and what it was like to communicate before telephones were invented.

Outdoor Activities In and Around Alice Springs

Voted by National Geographic as “one of the top 20 trekking experiences to be had on this planet,” the Larapinta Trail offers overnight and short walking opportunities. On your travel to Australia, you can hike all 223 kilometres/138 miles through the West MacDonnell Ranges, or just one or two of the 12 sections which traverse ancient landscapes and which are graded by ability. Each section can be reached by four-wheel drive from Alice Springs, so you can join or leave the trail at any of the trailheads. The trail weaves past some of the world’s most ancient rock formations and nearly 600 species of rare flora.

For the less energetic, consider a scenic flight over the town, experiencing the vibrant colours and changing landscapes of the Outback. This can be done on half-hour helicopter and plane flights or a full day experience which covers Central Australia’s dramatic and magnificent scenery.

Enjoy a camel ride? Why not take a half day tour and spend time journeying deep into some breathtaking local scenery. Due to their gentle nature, camels tend not to frighten the wildlife, thereby giving you a chance to get up close to wallabies, kangaroos, lizards, and native birds. The silence of the bush before dusk is a magical experience, and an hour-long camel ride through the ranges at sunset is an opportunity for some truly spectacular sights on travel to Australia. At the end of your journey, you can enjoy a refreshing drink at the “Camel Lounge.”

Oh yes and those golfers! They can certainly be accommodated here. The Alice Springs Golf Course is ranked in the top ten desert courses in the world.

Alice Springs plays host to numerous festivals and events. The Alice Springs Camel Cup is an amazing and quirky camel race that is held annually on the 2nd Saturday in July and attracts around 5,000 people from all over the world. Racing camels can prove a nightmare for riders and handlers, but fantastic viewing for spectators. Entertainment is assured, with nine unique races scheduled around the dusty outback track throughout the day.

The Henley-on-Todd Regatta (also called the Todd River Race) is a “boat” race held annually in the typically dry sandy bed of the Todd River. It began as a joke at the expense of the original British settlers and the formal atmosphere of the British river races. Every year in the spring, around September, the town holds a mock regatta, which large numbers of locals and tourists attend, and the celebration takes all day. It is the only dry river regatta in the world, thus it is the only regatta ever cancelled because of wet weather! The “boats” are made from metal frames and hung with banners and advertisements, and teams of “rowers” run their boats in races through the hot sand. Certainly unusual, wouldn’t you say?

The Tatts Finke Desert Race is an off-road, multi-terrain, two-day car race from Alice Springs to Aputula Community, crossing the Finke River. The race is held each year on the Queen’s birthday long weekend (second weekend in June).

The annual Desert Mob Marketplace attracts art collectors and art lovers from all over the world to see works from Aboriginal art centres, with works by artists from remote areas of the Northern Territory, South Australia, and Western Australia. This show usually runs in September at the Araluen Art Centre. 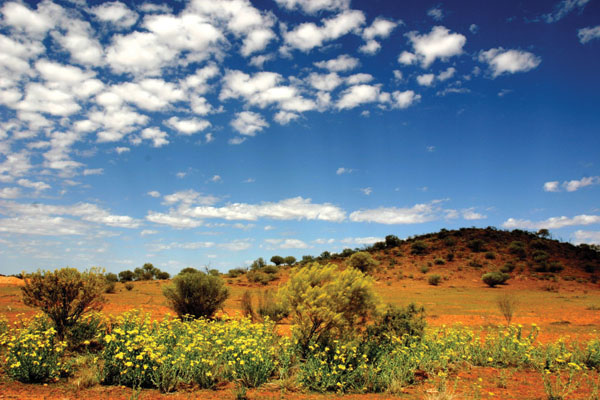 So, Alice is hot … with plenty to spend your time on. And, as a bonus to staying here on your travel to Australia, you can tack on trips to Ayers Rock, Kings Canyon, and other places. Why not add Alice Springs to your next Australia vacation.

For more information on Alice Springs, and other ideas on travel to Australia, visit www.goway.com.