South Africa is a massive country with worthwhile attractions from end to end. From tracking the Big 5 in Kruger National Park to exploring the moving stories of Robben Island, off Cape Town, there’s so much to see and do, the country can quickly overwhelm you with options when planning your South Africa trip.

It helps to know what you want out of your trip before you begin. Do you want to see incredible landscapes, track magnificent animals, sample South Africa’s lauded wines, or delve into the complex history of apartheid or the Zulus?

While it’s near impossible to see everything on a single South Africa vacation, here’s our guide to three very different sides of South Africa, with tips on planning the perfect trip with a little taste of everything.

From the dramatic silhouette of Table Mountain, to the wildlife-rich peninsula where the Indian Ocean meets the Atlantic, Cape Town occupies one of the most dramatic natural locations in the world. If it’s your first time in South Africa, you absolutely should spend a few days in Cape Town. A city tour is a great way to reach some of the further flung highlights including the Cape Peninsula, Boulder’s Beach, known for its penguin colony, and the Kirstenbosch National Botanical Garden.

If Johannesburg is the country’s economic engine, Cape Town is its cultural heart. Since it’s the country’s most visited city, there’s more available here to engage visitors with all South Africa is about. The Walk to Freedom tour, for example, takes you through not only the country’s apartheid history, but also what has evolved in the modern townships. As social progress has often been slow, the people in these communities have had to come up with their own solutions, and so a visit to them can reveal some surprising sides of South African local life. The full day version of the tour includes a visit to Robben Island. Once the infamous prison that held political prisoners, including Nelson Mandela and current president, Jacob Zuma, Robben Island is now devoted to telling the stories of apartheid, and the struggles for freedom and justice.

There’s more to South Africa’s cultural makeup than its tragic 20th century, however. For starters, the country boasts no less than 11 official languages (though you will get by just fine with English). It also boasts the world’s highest rate of Indian diaspora in Durban, South Africa’s second largest city, and the colourful Malay neighbourhood of Bo Kaap in Cape Town. In fact, Asian influences have played an important role in shaping today’s South Africa. This really shines through in “South African” cuisine, including spicy staples like bunny chow and bobotie.

If at all possible, allow at least two full days in Cape Town, not counting your arrival and departure days. This will give you time for a day tour to the city’s natural sights, plus a day to go in for a closer look in the form of a walking tour or visit to Robben Island. You might also like to add an extra day to visit the famous Winelands, in particular, Stellenbosch and Franschhoek.

Where To Find the Ultimate Safari

South Africa boasts a wealth of great safari options, from the wide plains of Kruger National Park, to beautiful Pilanesberg, to the Hluhluwe-Imfolozi Game Reserve, and iSimangaliso Wetlands in KwaZulu-Natal, to smaller reserves on the Cape.

But a safari on a South Africa trip takes careful planning in order to be successful. That includes choosing your destination, your standard of accommodation, and other factors.

Kruger National Park is the country’s biggest name for a safari. Spanning almost 20,000 square kilometres, the park boasts ideal safari terrain with all of the Big 5 animals – elephants, leopards, lions, rhinos, and African buffalo. The term “Big 5” denotes animals that were often thought the most difficult and dangerous animals to hunt, and so were the most prized. These days, they’re still the most prized, spied through the lens of safari-goers’ cameras. Pilanesberg National Park & Game Reserve is the other big name in safaris that is easily accessed from Cape Town. Set in an extinct volcanic crater, it is widely praised for its beauty and compactness, relative to Kruger.

The KwaZulu-Natal region also offers worthy options, particularly in the form of Hluhluwe-Imfolozi Game Reserve. The Big 5 can all be found here, along with a wide range of other species, including over 340 different species of birds. You can uncover some of South Africa’s human history here too, exploring evidence of hunting that dates back to the Stone Age. The St Lucia Wetlands is another astonishing wildlife area in the region, and a UNESCO World Heritage Site. Either of these make excellent additions to a few days sunning yourself on the beaches of Durban or a nearby resort town.

While it’s possible to add a “quick safari” at a nearby park or game reserve to a Cape Town vacation, it generally won’t offer the most typical or enjoyable South African safari experience. The simple reason for this is the vast difference in geography. The Cape is a spectacular region full of dramatic, rocky peaks and beautiful flora, and that kind of landscape just isn’t ideal for most of the big animals safari-goers come to see. Unless you have a specific reason for choosing a Cape safari, you’re probably better off flying to one of the better known parks in the country’s east.

When it comes to choosing your safari destination for your South Africa trip, also know there is a huge difference between a private game reserve and a national park. National parks allow unlimited numbers of visitors and vehicles on their roads. Drives are also confined to those roads, and restricted to particular hours, usually sunrise to sunset (ie: No night drives or off-roading). This can mean traffic jams, spooked animals, and a sometimes frustrating inability to go in for a closer look.

Most private game reserves allow no more than 2-3 vehicles at any animal sighting. This ensures the animals aren’t overwhelmed by visitors and vehicles. Private game reserves also restrict access to their own vehicles, and set their own hours. So night drives and off-roading are both common. This makes a huge difference if you’re hoping to see (mostly) nocturnal hunters like leopards. They also often permit guided bushwalks, and are usually located on the edge of national parks, so you can enjoy all the same animal sightings with greater comfort and flexibility.

They’re also far more expensive to stay at than national parks. Still, many travellers consider an African safari one of their dream, “bucket list” experiences, and so find the extra spend worthwhile. A national park safari can still be wonderful. But if you can splurge, give serious consideration to a private reserve.

What to Pack, and Other Tips for Following the Herd

When it comes to preparing for your safari, pack light, natural coloured clothing that can be layered. South Africa is blessed with some of the most temperate weather on earth, but you’ll still want to be prepared for rain and cool nights. Bring protection from the sun and bug repellent, wet wipes for freshening up, and some non-electronic entertainment such as books or games. The animals spend a lot of downtime conserving energy, and during the day, so will you.

If you’re serious about good photos, bring a proper camera. You will end up taking at least three times as many photos as you expect, and the last thing you want to be dealing with is the limitations/battery life/memory of your phone. You will almost certainly have electricity back at camp, but there may be power outages, and internet access and speed might not be of a standard you’re used to.

Finally, and perhaps most importantly, get to know your guide. They may be an expert on the region, but they’re not psychic. Knowing what interests you and what you came to see will make their job much easier, and your safari more enjoyable. Take an interest in them as well, since a chat with your guide can be an easy and fun way to learn more about day to day life in that region of South Africa. It goes without saying that you should also obey their instructions at all times, keeping yourself, them, and the animals safe. 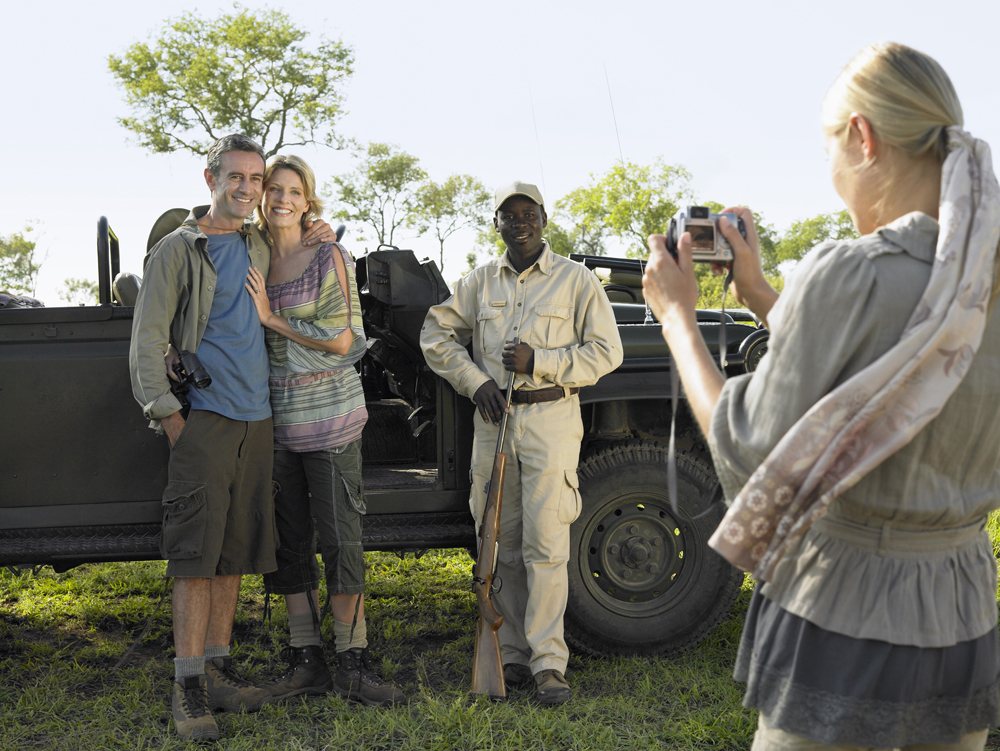 South Africa is a gorgeous country with a wide range of landscapes and sights to explore. Obviously, the locals aren’t going on safari every year. There are other things to do here on a South Africa trip, and they’re quite easy for international visitors to find.

The nation’s beaches, particularly on the Western Cape and in KwaZulu-Natal, are among its most prized natural assets. The year-round temperate climate means there is no bad time for a beach holiday, and the wildlife on the coast can be just as diverse as that you’ll find in national parks. For a real close encounter with nature, set out for a cage dive with South Africa’s fearsome great white sharks, a popular day trip from Cape Town or Durban.

If you have time, take a few days to just appreciate South Africa’s beauty for its own sake. One of the best places to do this is in the Drakensberg (Dragon) Mountains. Found mostly within KwaZulu-Natal, the area is defined by its incredible rocky peaks, gorges, waterfalls, and walking trails. KwaZulu-Natal is also one of South Africa’s best regions for a cultural vacation. This is the land of the Zulus, the site of struggles between the native kingdoms and European colonists, and home to some of South Africa’s earliest rock art. You can even visit the independent countries of Lesotho and Swaziland. Both are easily reached from KwaZulu-Natal.

From Cape Town, it’s an easy and oh so gorgeous drive into the wine regions of Stellenbosch and the Franschhoek Valley. Since French winemaking techniques were first brought to South Africa, the country has made the most of its idyllic climate (have we made this point yet?) and launched some of the world’s finest Cabernet Sauvignon, Merlot, Shiraz, Chardonnay, Sauvignon Blanc, and more. Even if you’re not a wine buff, the region is so beautiful, it’s a worthwhile diversion from Cape Town.