Recounting some colorful and unforgettable experiences on my Vietnam vacation.

Located an hour south of bustling Da Nang, Hoi An’s captivating coastline first lured me to Vietnam’s central coast. The idyllic shores rested gently near my home for the weekend, Boutique Hoi An Resort, a quiet respite with a restaurant serving authentic Vietnamese cuisine and lush, tropical gardens surrounding the grounds. The gateway to impossibly blue waters, the seaside sat completely empty, and I watched the day break from my balcony each morning, completely in awe of the setting before me. It was easy to feel insurmountable peace as the waves jostled and tossed in the distance, their lullaby drumming me to sleep. A silhouette of clustered islands looked like ships passing in the distance, and I could have stayed resting here forever, but I still had the city’s Old Town to explore.

Just as alluring as Hoi An’s shores is its downtown, a UNESCO World Heritage Site positioned delightfully along the South China Sea. The Thu Bon River runs through it, providing a channel system of access for fisherman who transport a daily harvest of fresh catch to the maze of markets in Hoi An’s town center. Here, I was delighted to find a slower pace, much more inviting than Hanoi’s frenetic streets. There were far fewer cars and motorbikes in the narrow maze of alleyways, and the chaotic cadence I grew to love in Hanoi was completely void here – time stood still. What I did find was a town with an entirely maintained historic charm. The presence of ancient temples and tucked-away teahouses were plenty, and I enjoyed exploring the city by foot, stopping to savor the delights of Hoi An’s Central Market along the way.

Rising early, I first ventured to the area where Central Market’s fisherman bring in fresh catch, all rowing their canoes along the market’s rear. The beguiling pace of purveyors hauling fresh fish, vegetables, and a plethora of unknowns into the market was a fascinating sight, and I enjoyed trying an array of new dishes with the city’s friendly locals. I discovered fresh fish, shrimp, and even seaweed, all available to purchase and prepare back at my hotel.

Opting to sample delicacies in the market, I first tried goi cuon (spring rolls) and later cao lau, a dish made by mixing noodles, vegetables, and pork. I soon discovered savory dishes are not uncommon in Vietnam, and it’s highly likely to have this type of meal for breakfast. With a shopping bag and camera in tow, I then drifted to the market’s center, where a selection of fruits and vegetables were on display as local purveyors presented their finest harvest in wooden baskets. I ordered a freshly-squeezed fruit juice containing Vietnamese staples like mangosteen, dragon fruit, pomelo, mango, and lychee.

After a proper mid afternoon rest at the beach of my hotel, I later ventured back out, this time to explore Hoi An’s downtown by moonlight. I discovered the area in an entirely new way, as street vendors still filled the streets, only now, they served the heartiest of evening dishes. I sampled sauce-slathered meats and fried donuts as I walked the quiet streets, falling more and more in love with this seaside town by the minute.

­Saigon to The Mekong Delta

My last stop on my Vietnam vacation took me to Ho Chi Minh City, but locals still refer to it as Saigon, a name more evocative of the vibrant and enigmatic charm the city holds. With a population of more than 8 million people, it was easy to get lost in the shuffle of both locals and motorbikes sweeping the streets, but I found the city’s pace quite intriguing, as small pockets of Saigon still felt of another era – reserved, home to intimate moments where friends and families convened.

As a history buff, I enjoyed staying in a locale where the old and new merged. I found the city’s convivial hum alluring, and I often found locals congregating near street side food carts and traditional markets and temples, all gathering to discuss the happenings of the day and to genuinely enjoy a comradery together. As familial connections occurred, the modern clashed in on the city, revealing itself in the form of towering skyscrapers, looming dramatically in the metropolis’ distance. Even though the towers stand tall, it’s Saigon’s elegant, colonial French boulevards and buildings, the riverfront, and the quaint sidewalk cafes that make it so wonderful – places of peace and reflection to watch the city go by at a rapid speed.

To learn more about Saigon’s past, I visited the Reunification Palace, home to 60s-inspired architecture and the South Vietnamese Presidential Palace and headquarters for the Saigon Government during the Vietnam War. I later ventured to the War Remnants Museum to read of the atrocities that occurred during the war. Although the shocking photos were hard to view and comprehend, it was important to see, as the museum does a fine job of illustrating the conflict between the U.S. and the Viet Cong. During my last stop to learn more about Vietnam, I went to the Cu Chi Tunnels, the vast, underground network of tunnels and trapdoors first built as a defense against the French, which later expanded during the Vietnam War.

Leaving Saigon for greener horizons on my Vietnam vacation, I drove inland to the Ben Tre province, located on a branch of the Mekong Delta, and an area standing in complete contrast to Saigon. Home to verdant tropical lands, the Mekong supports the entire country of Vietnam, lending the cities essential produce needed for survival.

Here, life is simple. Farmers raise ducks, chickens, and grow cacao, and most live on the banks of the river, using the water to live, cook, and drink. I explored the Mekong by boat, the preferred mode of transportation. To fuel the vessels, locals use coconut shells, wood, and rice husk.

Beginning in Tibet, the Mekong River flows through China, Myanmar, Laos, Cambodia, and Vietnam. It is the longest river in the world and a lifeline to many countries it touches. For Vietnam, it’s integral to prosperity, as 21 million live along Vietnam’s portion of the river, quite a high number considering the country is home to a total of 90 million.

As we barreled down small channels on this Vietnam vacation, I notice each home had its own water path to reach their village. Huge palms slap the front of our boat, and I bent and maneuvered out of their way, finally succumb to a large smack from a palm. We slowed down for bridges, which we barely fit under, and we watched as women washed clothes in the river and hung them to dry on lines. A scent of smoke filled the air as locals prepared their lunch, and I watched life on the Mekong float by as we passed homes set on the water, towing the delicate line between land and river.

During the journey, I stopped at a local’s home to try the region’s infamous cobra snake whiskey. Believed to be a cure-all for almost every ailment, the whiskey is said to relieve everything from backaches to impotency. The folklore lives on in many more ways along the Mekong, including in the boats themselves, which locals paint with faces of dragons and other magical creatures in an effort to ward off evil spirits and any other entity wishing to do the ship and its passengers harm – like crocodiles and the devil.

On this Vietnam vacation, I discovered a life of contrast, a beautiful juxtaposition of old and new, city and country. 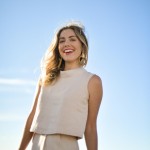 Michaela Trimble is a travel writer and photographer previously based in New York. Now on the road full time, she traverses the Earth for inspiring, transformational stories, primarily focusing on luxury adventures, hotels, female adventure travel, and culinary travel. She thirsts to experience cultures and traditions different from her own, and she loves feeling small beneath a blanket of mountains.