2017 is a perfect year to make the trip to France and Belgium and pay respect to fallen soldiers who died in service of peace to their country and for the world.

When you walk through the medieval port of Calais or gaze upon the gorgeous fields of the Flemish countryside, it’s hard to reconcile the beauty of what you’re seeing with the abhorrent destruction that took place there. What is now a lovely park used to be a hellish battlefield.

World War I killed over 17 million people. It was one of the bloodiest wars in the entirety of human history. The effects of that war are still being felt today, in the family members who live with the memories of their ancestors who fought or died in the war, and in the cities that live with the still-lingering repercussions of destruction. Even 100 years later, the violence of World War I affects the people of Europe.

This coming April 9th marks the 100th anniversary of the Battle of Vimy Ridge, one of the defining moments in Canadian history. In honour of this milestone, thousands of Canadians are heading overseas to visit Vimy and the other battlefields of World War I. No matter your nationality, this year is a perfect time for a trip to France and Belgium to pay tribute to the soldiers that died there 100 years ago. 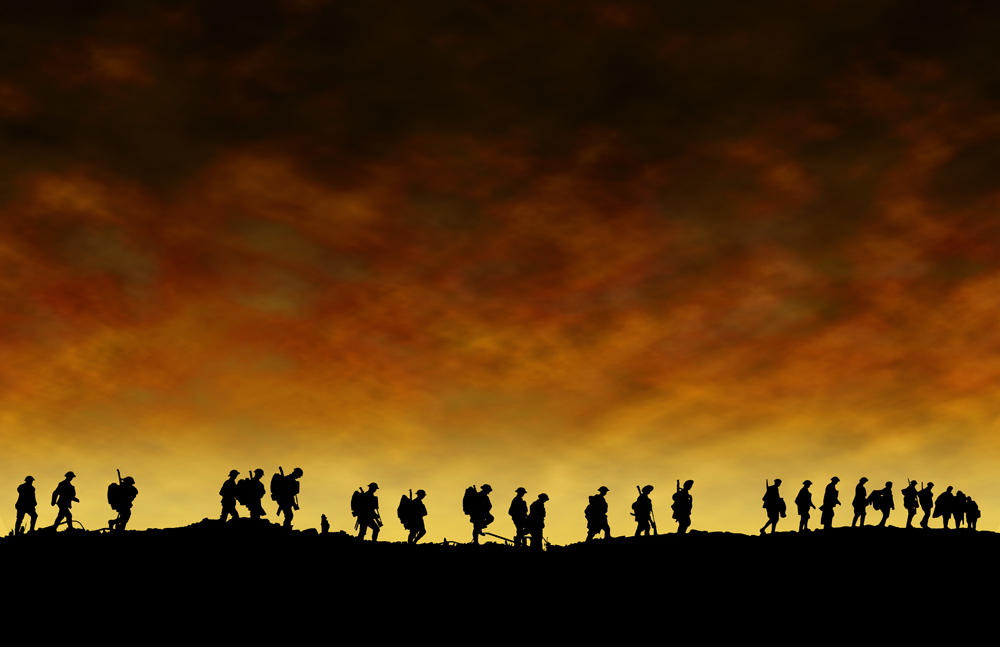 The Largest Battle of the Western Front

From July 1, 1916 to November 18, 1916, hundreds of thousands of Allied soldiers attacked German forces near the River Somme in northern France. The offensive was meant to speed up the war and ease up the German assault on Verdun, further to the south, but instead it mired both sides in months of trench warfare. Over one million soldiers were killed or wounded in the battle, marking it as one of the bloodiest battles in history. In fact, it was the largest battle on the Western Front during the First World War and is still considered one of the darkest moments in British history.

There are many places to pay your respects to those who fought and died in the Battle of the Somme. The Newfoundland Memorial in Beaumont-Hamel, to the northeast of Amiens, is one of the best-preserved battlefields in northern France. Despite the site’s now-vibrant growth, the trenches remain intact. You can walk through the stone-fortified trenches to imagine how most soldiers spent their days and look out over No Man’s Land, which is relatively barren, even 100 years later. Soldiers from Newfoundland (which was its own dominion at the time) suffered particularly awfully at the Battle of the Somme. The battle wiped out almost the entire Newfoundland Regiment in the first morning. Today, the Caribou Mound is dedicated to these fallen men. You can climb the small hill and see the bronze caribou statue that stands as a symbol of the regiment.

There are several other memorials near the Somme battlefields that are worth visiting on your trip to France. In particular, the massive Commonwealth Memorial in Thiepval is dedicated to the missing soldiers of the Somme who died and have no known grave, including over 72,000 British Commonwealth soldiers. The memorial is renowned for its massive red-stone archway.

The Somme 1916 Museum in Albert provides a terrifying recreation of trench combat and air assaults. An old air raid tunnel was converted into a sprawling museum with dioramas recreating vignettes of trench warfare. The centerpiece of the museum is a long stretch of the air raid tunnel where sound effects and flashing lights replicate what it’d be like for citizens hiding within the tunnel during an air raid. As you walk down that stretch of the tunnel, you’ll find your pace quicken and the hairs on the back of your neck stand up. For the briefest of moments, you get a small sense of the terror that must’ve filled people’s days during the war.

Nearby Albert is La Boiselle’s Lochnagar Crater. During World War I, the British dug an underground mine and filled it with explosives placed beneath the German positions. When detonated, the explosives created the largest crater of the Western Front. The massive 21-metre deep hole remains to this day.

The entire Circuit of Remembrance, from Albert to Peronne, is filled with museums, battlefields, and dedications of remembrance, all with the hope of educating people on the Battle of the Somme, preserving the memories of those who died, and ensuring that through education and international partnership, future wars are avoided. The Somme Battlefields Partner network is also a useful tool to complement a formal tour. This association of local guides, hoteliers, and restaurant owners is dedicated to preserving the history of the Battle of the Somme and helping Globetrotters learn about the First World War.

The Birth of a Nation

Between April 9 and April 12, 1917, Canadian soldiers assaulted Vimy Ridge, the highest point in the Arras region, and eventually secured it from German forces. Against all odds, the Canadians succeeded in the nation’s most celebrated military victory. It was the birth of Canadian nationalism and arguably the moment Canada truly became a nation separate from Great Britain.

The Battle of Vimy Ridge was a part of a larger offensive meant to break a stalemate on the Western Front. The French attacked the Germans in the Champagne region, while the British and Commonwealth nations attacked near Arras. After British troops had failed to take Vimy several times before, Canadians were brought in to take the offensive. For the first time in the nation’s history, all four divisions of the Canadian military fought together.

The day was Easter Monday, and instead of spending the day at home with their families or in church, thousands of Canadians approached the ridge behind a creeping barrage of artillery fire. When the barrage let up, they engaged with well-prepared German forces that refused to give up their position. However, after overcoming disadvantages due to position and the well-entrenched German machine guns, the Canadians took the ridge and the surrounding towns.

Nowadays, a white limestone memorial sits atop the ridge’s highest point as a dedication to all the Canadian soldiers killed in France during World War I. Toronto sculptor and architect, Walter Allward, constructed the memorial in the late twenties and early thirties. King Edward VII unveiled the completed memorial in 1936.

France gifted the ridge to Canada in 1922 under the condition that the site would forever be used to honour Canada’s dead from the First World War. You can still visit the gorgeous memorial today – it’ll be something you never forget on your trip to France. When you arrive, you’ll visit Vimy Ridge Museum and take a tour of the preserved trenches nearby. Then you’ll walk up the ridge to the site of the white memorial, which sits alone on the gently rising stretch of green.

I still remember when I first laid eyes on the white limestone monument. I remember strolling what seemed no more than an ordinary park lane, and then stopping in my tracks as the monument crested the ridge. I remember the slow approach, where you look down at your every step, pondering who had walked there in the past, whether he had survived the conflict or whether his name was now etched onto the memorial’s many walls. I remember looking upon the downtrodden face of Canada Bereft, the solitary statue of a mourning mother on the memorial’s far edge, and wondering how it would’ve been to live in that time, to go through each day not knowing if your son would return home. It is difficult to express the mixture of sadness and pride the monument instills in you. All I know is it’s an experience I’ll never forget.

There has never been a better time than 2017 to pay homage to Canada’s fallen and visit the Canadian National Vimy Memorial on a trip to France.

Ypres and the Quagmire of Passchendaele

If Vimy Ridge was Canada’s first great moment as a nation, Passchendaele was the proving of its mettle. The Battle of Passchendaele was a part of the major battles that took place at the Belgian City of Ypres or Ieper during the war. Traditionally a charming medieval city in the heart of Flemish West Flanders, Ypres became the site of infamous and major battles during the First World War. For instance, during the Second Battle of Ypres, from April 22 to May 25, 1915, the Germans used poison gas against the Allies for the first time.

During July 1917, Allied forces began a new offensive, as British General, Sir Douglas Haig wanted to retake the German-held city, which Allied forces had repeatedly lost in the past. Dubbed the Third Battle of Ypres or the Battle of Passchendaele, named for the ridge to the east of the city, this conflict turned into a devastating stalemate causing only death and natural destruction. The entire landscape, a natural floodplain, turned into a giant quagmire, drowning soldiers and making any sort of artillery movement impossible. After British, Australian, and New Zealander forces failed to take the town, command chose the Canadians to resume the assault after their success at Vimy Ridge and Hill 170.

After four weeks of battle and suffering knee-high mud, constant rain, and debilitating illnesses and trenchfoot, the Canadians took the hill. Sadly, they soon had to evacuate as Germans advanced during their last push of the war. At the end of the Third Battle of Ypres, nearly 500,000 men had died and no real gains had been made.

Today, Ypres is once again a charming medieval town, but it’s still haunted by the First World War. War museums abound. On a Belgium vacation, you can visit the Memorial Museum Passchendaele 1917 and the In Flanders Fields Museum, which recounts the city’s role during the war. Nearby Hill 60 Battlefield Memorial Park offers remembrance to British and German forces buried in collapsed mines during the war. Be sure to see Tyne Cot Cemetery right outside the city. It’s the largest commonwealth cemetery in the world and a gorgeous but somber memorial, where over 10,000 soldiers lie buried.

The town of Ypres itself offers a charming respite from the solemnity of Flanders Fields. Belgium rebuilt the city after the war, and even reconstructed the famous Lakenhalle or Cloth Hall in the market square, which houses the In Flanders Fields Museum. The massive Gothic clock tower is particularly gorgeous.

As 2017 marks 100 years since the battles of Vimy Ridge and Passchendaele, it’s a perfect year to make the trip to France and Belgium and pay respect to fallen soldiers who died in service of peace and their countries’ continued safety. It may be sobering to spend your vacation visiting memorials, museums, and graveyards, but it’s also a profound experience, both illuminating and deeply moving. A tour of the battlefields of World War I is an opportunity to engage with the past, and promise to make the world of the future one where such hardship and devastation will never be repeated.