Visit the city that straddles Europe and Asia. Where the sightseeing is endless and the memories of your Istanbul vacation will last a lifetime.

If on foot, which I highly recommend, once over the bridge, walk up the fairly steep hill confronting you. The twisting old cobblestone streets of this neighborhood known as Karakoy will lead you directly to the Galata Tower.  This medieval structure is one of the major landmarks of Istanbul.  It is the equivalent of a nine-story building and has an observation deck on the top which can be reached either by elevator or the stairs. Here you will have a full 360 degree view of the whole city. If you are in need of refreshment, there is a café and a restaurant up there.  If you are a jazz fan, there is a very pleasant club called the Nardis Jazz Club which is not far from the Galata Tower. The crowd is a mixture of visitors and locals.

From the Galata tower, you will be at the commencement of Istanbul’s main shopping thoroughfare, Istiklal Caddesi (Istiklal Boulevard) in the Pera neighborhood. This is a lengthy street (1.4 kilometres/1 mile long) and is a pedestrian thoroughfare only except for an antique streetcar which runs along the centre of the street.  As you move up the street, you will pass by many stores, boutique shops, bookstores, art galleries, movie houses, theatres, cafes and restaurants.  However, that’s not all. You will also pass by some beautiful Ottoman houses and some designed in Art Deco style. 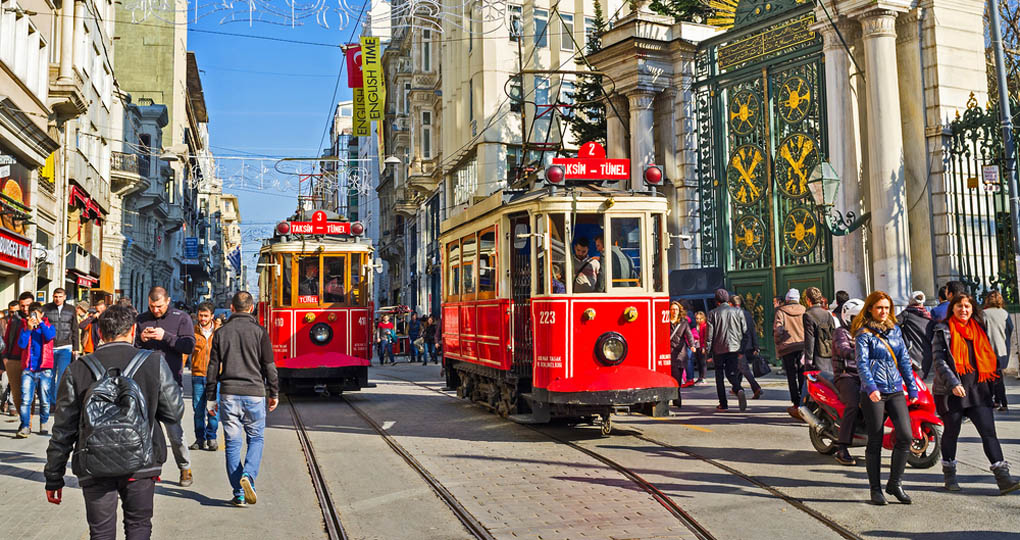 About half way along, you arrive at Galatasaray  Square. There is a courtyard just off the square whose name translates as Flower Passage. However, rather than be known for flowers, it is a place filled with an excellent array of pleasant restaurants (note one for your evening meal).  Eventually, your stroll up the Istiklal Caddesi will end at Taksim Square, Istanbul’s best-known square.  You are now in the heart of the modern part of Istanbul.  You will not be able to miss the Independence Monument dedicated to Ataturk, the country’s revered statesman and the Republic’s founder in the square. There are a number of hotels, cafes and restaurants dotted around the circumference of Taksim Square.

Continuing north, you will see on your right, a very attractive green area which is Taksim Gezi Park where locals stroll or sun themselves. As you proceed along the avenue out of Taksim Square, you will now find yourself in one of the most upscale districts of Istanbul. Note the designer boutiques, the Starbucks etc. You will not find this neighborhood very different from other major international cities.

If you walk down the hill from here to the Bosphorus, you can’t miss the very impressive and vast Dolmabahce Palace with its location on the shores of the Bosphorus. It is the largest palace in Turkey and was the home of the latter-day Ottoman sultans.  It has 285 rooms and 46 hallways. The palace is best viewed from a cruise boat on the Bosphorus (more coming up). In the same vicinity is one of the most elegant and impressive hotels anywhere. The Ciragan Palace Hotel was a former Ottoman palace built originally in the mid 1800’s. Its location on the waterfront is stunning.   Oh and the Sultan’s suite is a mere 30,000 Euros per night (CA$43,760/US$33,455) plus taxes of course.

One place that should appeal to lovers of art is Istanbul’s answer to Ravenna in Italy.  A few kilometers/miles from the centre of Istanbul is the Chora Church just outside the city walls.  The church (now a museum) is famous for its excellent colourful 14th Century mosaics which have been well preserved.  Some are unfortunately fragmented but still worth looking at. The mosaics mainly depict stories from the New Testament.  As an aside, if travelling by road to the church, you will possibly come across an interesting sight. Look out for a multitude of large shop windows perched high on two levels displaying nothing but wedding dresses

You might wonder about the attractions on the Asia side of the city which can be reached by ferry or over a long bridge, I don’t recommend walking over it). In my opinion, if you have limited time, don’t spend it over there. There is too much to experience on the European side.  However, in the district known as Uskudar, you will find a number of interesting mosques including one called the Tiled Mosque whose interior is attractive but generally, Uskudar is a residential neighborhood.  Camlica Hill in Uskudar is a public park affording more views of the city. There are tea houses, cafes and restaurants to be found here along with flower gardens and fountains. To the north of Uskudar is the Beylerbeyi Palace built in the mid 1800’s for the Ottoman regime. It houses an interesting collection of furniture. Again, it is best viewed from the Bosphorus.

Now we come to a “must do” in Istanbul. This is to take a Bosphorus cruise. There are several companies offering cruises of various durations. It depends on the time you have available but you would need a couple of hours to do this. My recommendations are to take the one that cruises for 90 minutes, drops you off for a couple of hours or so in Anadolu Kavagi, an attractive small village with a selection of restaurants  and cafes and an interesting castle and then brings you back or you can simply take a non-stop 2 hour cruise.

There are even longer cruises which reach the Black Sea if of interest.  The views on any Bosphorus cruise are impressive and some boats call in at different places on both the European and Asian sides.  You will see the Dolmabahce Palace, the Beylerbeyi Palace and the Ciragan Palace en route.