Christopher Columbus is known for “discovering” the New World, but it’s not widely known that he never actually stepped foot on the main land of Central or South America! It was in fact Vasco Núñez de Balboa who was the first Spaniard to establish a permanent foothold on the mainland, when he founded the settlement of Santa María la Antigua del Darién in present-day Panama in 1510. It was here, and with Balboa, where dreams of building a canal were inspired.

You see, inspired by the rumours of a new land in South America, rich in silver and gold, Balboa became the first European to lay eyes on and name the Pacific Ocean when he crossed the Panamanian isthmus in 1513. The route they walked soon became the pathway of gold and silver leaving the New World, and for supplies from Spain coming in. It was from the 1500s onwards that the thought of creating a waterway dissecting the continent and connecting the two oceans, played on the mind of conquerors, explorers, governments, and investors. Construction was finally started in the 19th century.

If Balboa were to stand today and look back and see what had come to pass with the onset of the modern Panama Canal, he would most definitely think, “Now that would have made that trek of discovery so much easier!” 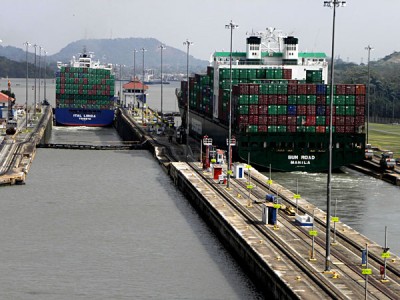 The canal’s history has been one of political turmoil as well as individual challenges. From the politicians who conceived the idea, to the engineers and labourers who constructed the canal – many lost their dreams, fortunes, and even their lives along the way. After many decades, the result of one of modern engineering’s most amazing achievements not only cut the continent in two, but opened the door to a world of international trade, travel, and commerce on a much larger and industrial scale.

It was in 2014 that the Panama Canal celebrated its 100-year anniversary, and is now in the last stages of a further widening of the waterway. With direct flights from most North American gateways with Copa Airlines into Panama City, no visit to Panama is complete without a visit to one of the world’s most amazing engineering feats – where a continent is divided in two!