Goway’s Asia Specialist, Karen Wang, writes about her spiritual journey in Dharamsala, India, where she fulfilled her lifelong dream – to be in the presence of His Holiness, the Dalai Lama.

I was in Varanasi, India when I heard that my flight to Dharamsala got cancelled due to bad weather conditions. The worst thing was that Dharamsala was forecasted to have floods, and it was advised that people should avoid travelling there. My brain was frozen for two seconds, wondering what to do. I soon snapped out of it and sprung into action, running around to find a taxi to drive the 14 hours it would take to get to Dharamsala that day.

The reason I insisted on going, even with all these troubles and weather warnings, was to meet His Holiness, the Dalai Lama. He was to conduct a Long Life Offering Ceremony the following morning. I was told to get there as early as possible to find a good seat. Fortunately, I made it!

The ceremony started at 8am and I stepped out of my guest house, which was a 10-minute walk to the Main Tibetan Temple, at 6am. It was still dark and I was relying on my cell phone light to avoid stepping into the construction holes on the road. The Himalayan mountain air was crisp and cold, and the rain coming down didn’t help. As I walked further, the sun started to rise behind the mountains, warming the air and my spirits. 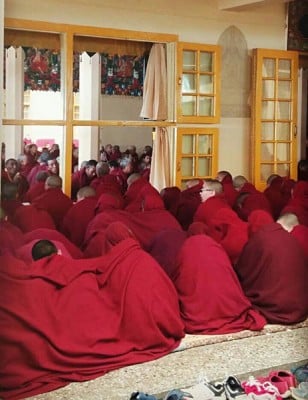 I was not alone on the street. Local people, Tibetans, and tourists joined me in the pilgrimage. Coming from all parts of India and the world, we were all drawn in the same direction – to the home of His Holiness, the Dalai Lama.

After going through the security checks, I found a good place to sit among all the Tibetans. I’d been to Tibet, an autonomous region in China, and the locals’ smiles were what caught my heart, shining so warmly and sincerely. I thought that surrounding myself amongst that kind of happiness would be perfect. I wish I could’ve spoken Tibetan so that I could’ve thanked them when they were trying to hide me from the security guards. Apparently I sat in the wrong place as you needed a permit for that area. I was very thankful that I didn’t get kicked out all together.

The ceremony featured prayers and chants lead by His Holiness. I embraced the spiritual moment and Buddhist atmosphere. Meeting the Dalai Lama will continue to leave a lasting impression on my soul, as the overwhelming feeling of seeing His Holiness up close is truly a lifelong dream come true. I enjoyed every moment to its fullest, and would love to have stayed on for months to soak up the knowledge and peace within this place of prayer.

If I had to use one sentence to conclude my trip to Dharamsala, India, it would be, “I promise myself I will return to this magical place in the very near future.” 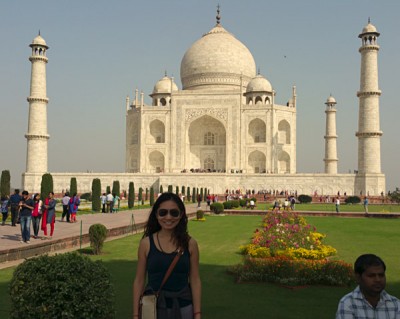 As a dive master, Karen has been teaching and diving in a lot of exotic places. The earth’s surface is covered by 70% of water so she figured that she should spend 70% of her time underwater. In her 30% time remaining, Karen does yoga, meditates in caves in the Himalayas, and looks for ways to leave positive memories everywhere.