It is a haunting and unforgettable sight. Thousands of subterranean life-size terracotta warriors and horses, lined up in perfect form, forever pledging allegiance to a long dead Chinese Emperor. In the ancient city of Xian, China, one of the world’s most famous archaeological sites continues to astonish and mystify archaeologists and visitors from the world over. 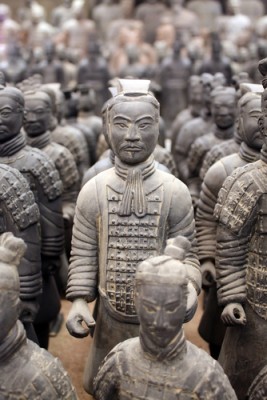 The Terracotta Army is an immense collection of life-size clay sculptures depicting the armies of Qin Shi Huang, the first Chinese Emperor. Constructed over 2,200 years ago, the Terracotta Army was built at the request of the Emperor himself, who believed he would continue to rule in the afterlife. The Emperor, who took the throne at age 13, wanted to be buried with his army who would guard his tomb and protect him for eternity. Archeologists have uncovered over 8000 warriors, 600 horses, and 130 chariots near his tomb, and more underground treasures are waiting to be unearthed at the site.

The legendary Army was first discovered by workers digging a well outside the city of Xian in 1974. When Chinese archaeologists started to excavate around these astonishing figures, they found fascinating clues to life in mysterious ancient China.

Scientists believe that each clay soldier is modelled on an individual, real soldier from the Emperor’s Army. Research has proved that Qin Shi Huang’s army was drawn from all over his vast empire, and this ethnic diversity is reflected in the variety of hairstyles, headdresses, and facial expressions on the soldiers. No two soldier’s faces are alike, and the army figures vary in height according to their rank. The tallest sculptures are the generals, measuring in at over six feet tall, while other smaller figures include labourers, acrobats, strongmen, and musicians. 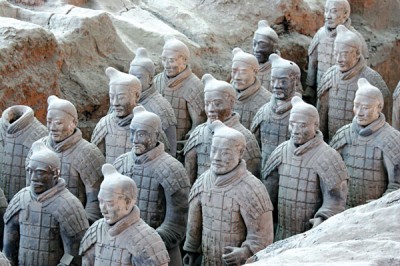 Placed in pits in precise formation, the intricately carved warriors were buried in uniform and originally held real weapons such as spears, swords, or crossbows. The entire collection of artifacts represents the army that triumphed over all other Chinese armies and helped to form a united China 22 centuries ago. Though the figures are fragile, most of them have been restored to their former grandeur for visitors to behold.

China’s Young Emperor
Ying Zheng took the throne in 246 B.C. at age 13, and by 221 B.C. he had unified a disparate group of warring kingdoms and took the name of Qin Shi Huang Di—the First Emperor of Qin. According to historian Sima Qian, over 700,000 workers were drafted to build the Terracotta Army, and those involved in the construction of the site were rewarded with graves beside their Emperor. Qin Shi Huang’s mausoleum, still buried underneath a nearby hill, remains unexcavated. The tomb appears to be hermetically-sealed and is rumored to be booby-trapped! It is believed that under the site of the mausoleum an exact replica of Qin’s lavish empire has been re-created, complete with imitations of the area’s rivers and streams made with mercury flowing to the sea through mountains of bronze.

If These Ancient Walls Could Talk
The fabled city of Xian, once known as ancient Cháng’ān, was the eastern-most stop on the Silk Road, the ancient trade route connecting China to Europe. It was from Xian that caravans started their journey to the Mediterranean Sea, changing the Western world forever. Once home to emperors, courtesans, poets, monks, merchants, and warriors, Xian was the cradle of ancient Chinese civilization dating back to 4000 BC, and the capital city for 11 dynasties up to the 9th century.

Xian is one of the few cities in China where the old city walls, built during the Ming Dynasty (1368 – 1644), are still standing. The 40 foot wall is the largest and best preserved ancient city wall in the country, surrounded by a moat that attracts visitors year round.

Though strongly rooted in the past, today’s city of Xian has a cosmopolitan flair and is considered by many Chinese to be one of the nation’s arts and culture centres. Xian is perhaps most famous for its Terracotta Warriors, and  offers a fascinating glimpse into the rich history of one of the world’s great superpowers.

Below are some travel ideas to Xian and other cities in China: