With the end of winter, Indians nationwide celebrate the coming of summer. The Holi Festival of Colour is symbolic to this change of season and is observed on the full moon day in Phagun (12th) month in Hindu calendar, which usually falls at the end of February or early March. This year, it is official happening on March 16, 2015. Well renowned for its fun atmosphere and ubiquitous color powder known as ‘Gulaal‘, Holi is one of the best occasions to experience India at its happiest. But one should not rush to throw oneself into this hilarious festival of colors: some homework beforehand will prove to be helpful. This is because the specific date of Holi Festival varies from year to year, and in some places, Holi is celebrated prior to the actual official Holi Day. We encourage those who are seriously interested to plan their trips with an experienced travel agent, to avoid any confusion. 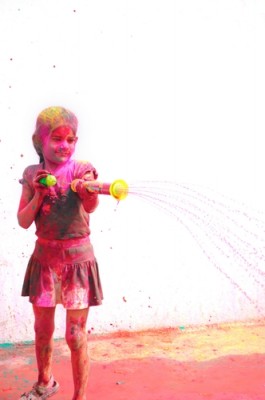 Holi is an important festival which is observed in many parts of India. Generally speaking North India, especially in the popular Golden Triangle (Delhi, Jaipur, Agra) is more vivid and jubilant than that in southern part of India, which is quite solemn and more focused on prayer and temple rituals. Here are some popular spots for taking part in Holi and each with their own distinct charm.

The word “Holi” has its etymology from the demoness “Holika”, the evil sister of demon King Hiranyakashipu. Following this legend, King Hiranyakashipu had earned a blessing from Lord Brahma that made him virtually immortal. These special powers blinded him with pride and vanity, as he grew arrogant and projected himself as a God, thus demanding his subjects to worship only him. Hiranyakashipu’s own son, Prahlada however, disagreed to this and remained devoted to Lord Vishnu. This infuriated Hiranyakashipu and he subjected his own son Prahlada to severe punishments. None of the atrocities affected the boy. Finally, Holika – Prahlada’s evil aunt – tricked him into sitting on a pyre with her. Holika was wearing a cloak with powers that made her immune to injury from fire, while Prahlada caught by surprise as the flames surrounded him. As the fire roared into a giant pyre, the cloak flew from Holika and encased Prahlada, thus protecting him. Holika perished and Prahlada survived. Lord Vishnu then appeared in form of Narsimha and killed Hiranyakashipu. The bonfire, lit by all the night before Holi, is thus a reminder of the symbolic victory of good over evil. As mentioned above, the various regions of India celebrate this festival in different ways.

As the biggest metropolitan city in India, Delhi celebrates Holi in a modern and contemporary way. It hosts the Holi Cow Festival, a music festival with traditional multi-colored powder throwing, live music performed by Indian musicians, with a healthy dose of sheer madness. Non-toxic colors are provided along with street food, drinks, etc, and an incredible energy takes over this world city.

For all those who love elephants, Jaipur is your choice for Holi celebrations. Here the Rambagh Polo Ground on the eve of Holi hosts elephant polo, tug-of-war, and a parade of elaborately painted elephants coupled with Rajasthani folk dances. Immerse yourself alongside locals and try your hand in a turban tying competition, or be welcomed into a tug of war match. The Matka race is open to all, and consists of a short dash balancing a clay pot of water on your head, as crowds of foreigners and locals alike cheer the racers on.

If you want to experience the wild atmosphere of Holi, venture out on the street where you’ll soon find yourself coloured in ‘Gulaal‘. We recommend wearing inexpensive clothing and to bring a bottle of water. Photographers will find themselves in a dilemma, as you can capture some incredible scenes but spend your time worrying about your camera. Consider a smaller, point and shoot camera over larger DSLR camera, with a terry-cloth to clean your lenses of coloured powder. For those wishing a slightly less intense and crowded celebration, many hotels arrange private party’s for their guests with music and large buffets of Indian and Western cuisine.

Everyone who gets the pleasure and privileged of experiencing such a wonderful, eclectic and intense show of Indian culture should know the punch line which ensures that no one feels offended despite large crowds, pulsating music and a tradition of throwing hand-fulls of powder in peoples faces:”Bura na mano, Holi Hai!” This basically means ‘Don’t be mad, its Holi!

We have a collection of travel ideas to India, including small group tours of custom travel experiences. There’s still a few spaces on our small group tour The Indian Odyssey on March 15, 2016 which is in time for this years Holi.