Connect with the world’s oldest living culture in Australia. Share some of the secrets that have been passed down for at least 50,000 years – through art, dance, myths, music and the land itself. Let Aboriginal Australians help you understand this land and its spirituality and wonder through personal interaction and hands on teachings. Australia is quite unique as a modern travel destination, possessing a rich cultural history spanning thousands of years of their indigenous people entirely recorded through verbal stories, which is best experienced alongside the very people themselves, the Australian Aborigines. The regions of Australia vary significantly, but we’ve been promoting experiences with several aboriginal communities in 3 distinct areas and have endeavoured to capture what are our most popular experiences.

ULURU (a.k.a. Ayers Rock): Located in the ‘Red Centre’, this is the heart of Australia, of Aboriginal Culture and of the fabled outback. It’s a harsh landscape even today, but for thousands of years aboriginal communities have existed in these landscapes.

Aussie Bush Tucker Tour: With an Aboriginal guide, learn how they historically survived in such a hot desert climate on a variety of bush plants and animals. While exploring on foot, you’ll have to opportunity to taste a selection of bush foods while you talk about desert life. You’ll also learn tricks in finding water, shade, living in the desert, aboriginal history, and you might even decide to try eating a wichetty grub!

Kata Tjuta Domes: Travel to Kata Tjuta (A.k.a. The Olgas) where unique flora and fauna thrive. Here, a stunning rock formation exists which to the local aboriginal people is as important a cultural icon as Uluru (Ayers Rock). Your Aboriginal guide will share the cultural significance of this sacred site, and explain fascinating aboriginal mythology before a walk through Walpa Gorge.

CAIRNS: Cairns is the gateway to the Great Barrier Reef as well as the lush Daintree Rainforest. Here is essentially the end of the more developed East Coast of Australia, as settlements are fewer and farer between North of here. In the Daintree, north of Cairns are some fantastic jungle experiences, while Cairns itself still delivers true Australian experiences. 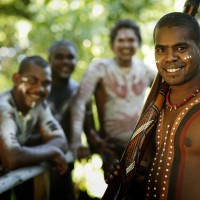 Daintree Dreaming: Head into the tropical Daintree Rainforest and learn about the area’s rich Aboriginal history and culture, combined with the oldest living rainforest on the planet and the spectacular Mossman Gorge. 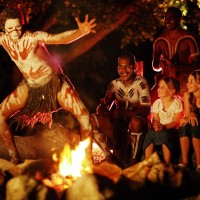 Tjapukai by Night: This aboriginal cultural performance has become a must-do experience in Cairns and Tropical North Queensland showcasing Aboriginal Culture. Learn about the fascinating Aboriginal concept of Dreamtime, their history, and witness an ancient ritual during wholesome buffet dinner with Aussie wines. This tour will provide many unique photo opportunities, and is the perfect night activity while in Cairns.

DARWIN: Located in the Northern Territory of Australia, Darwin is the gateway to some of the finest outback and outdoor experiences Downunder, like Kakadu National Park. There’s a very high population of Indigenous Aborigine people in Darwin, who’s connection to and history with the land here is fascinating and palpable.

Indigenous Litchfield Spectacular: Experience a small group, Aboriginal guided luxury day tour by 4WD. Learn the real story of the Northern Territory as you go off the beaten track and learn how the indigenous people here foraged for food, made medicine, and coexisted alongside crocodiles, barramundi and enormous fruit bats.

Davidson’s Arnhemland Safaris: Immerse yourself in the Aboriginal heritage and sacred sights of Arnhemland, in Australia’s Northern Territory. Located at Mt Borradaile is a sacred aboriginal site. This is an exclusive remote area nestled against the Arnhemland escarpment. Discover rugged ranges fringed by idyllic billabongs. Explore valleys caves and catacombs that have been occupied for over 50,000 years plus much more.