This story was first published as ‘The Story of Peter Andrew‘

Sitting poolside at Singita Faru Faru Lodge at tea time, in the dappled shade of the acacia trees, our guests are treated to a feast of sweet and savoury delights before their afternoon game drive. It is a wonderfully indulgent spread; all manner of cakes, candies and confections are on offer, all washed down with homemade lemonade, iced coffee and exotic teas. It might be very hard to imagine that the hands of the pastry chef responsible for these heavenly morsels were also once those of a poacher.

Peter Andrew was born in a small village on the outskirts of Singita Grumeti in Tanzania. At the age of 15, with no apparent employment alternatives available to him, he started poaching. He was a skilled huntsman and extremely fast on his feet, which made it easier to escape from conservation officers. This deadly combination made Peter a force to be reckoned with but it wasn’t an easy or ethical way to make a living.

In 2003, Peter was approached by Brian Harris, former Wildlife and Community Development Manager of Singita Grumeti, who wanted him to stop poaching in exchange for a job at one of the lodges. He was hesitant initially due to his lack of education, but after further prompting from his grandmother, 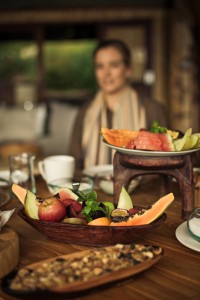 was eventually persuaded and started off helping with the construction of Singita Sasakwa Lodge. The following year, he was accepted as an apprentice in the kitchen at Singita Sabora Tented Camp, where he excelled in his position. He also took it upon himself to specialise in pastry and learn English so that he could improve his situation further. He developed so quickly in fact, that in 2005, Peter was promoted to Commis Chef and then moved to Singita Faru Faru Lodge in 2011 as a full-time Pastry Chef, where he remains a vital part of the kitchen team.

Peter’s achievements are numerous: he turned his back on poaching, found himself a wonderful new profession, worked hard to overcome his circumstances and changed his life for the better. He is rightly proud of himself, and he is an invaluable member of the Singita family.

Watch this short video as Peter talks about his story: