I’m in awe! I remember a few years back, I was sent this viral video on “great places you absolutely must visit” and these incredible rainbow hued hills of the Danxia Landform Park were one of the images. That image always stuck with me.

I have hiked over high passes in the Indian Himalayas, trail blazed through the continental divide in Canada, climbed through Kings Canyon in Australia, but all of these pale in comparison to these Crayola hills that almost looked photo-shopped.

These hills are located just a short flight from Xian or Beijing plus a 3 hour drive. I was amazed to learn that this site is a relatively new discovery…at least to the masses. I’m sure the caravans that passed through this infamous passage known as the Silk Road knew of its existence but selfishly kept its secret to themselves.

It was hard to decide whether I was on or off the beaten path. Thousands and thousands of foreigners and locals alike had been here before, but there was hardly anyone in sight. Here I was in remote China, travelling on a path 2,000 years old, the legendary Silk Road, a trail we all have heard of, connecting east and west, spanning religions, languages, mountains and continents. It didn’t feel like a beaten path, in the tourist sense – quite the opposite. Now, the Great Wall of China, there’s a destination on the beaten path… right?

After having travelled extensively throughout Asia for years, I surprisingly had never seen the Great Wall of China, what many people first experience when travelling to the East, so when the opportunity arise to see the fabled wall, I grabbed it.  However, most travellers do a day-trip from Beijing to one of several sites where you can experience the Wall. There’s nothing wrong with any of those places, but they’re known for being crowded, touristy, but obviously they’re popular for  a reason. But I actually flew into Jinchang City, somewhere few people could point to on a map, in North-central China on the edge of the vast Gobi desert, and it was here that I saw my first sight of the ancient Great Wall. No tickets, no line ups, no souvenir shops just a Great Wall with a dramatic desert backdrop. I knew then, I was truly off the tourist road. This was the beginning of my trip along China’s section of the Silk Road, but I’ll never forget that first impression, surrounded by nothing but Gobi Desert and the Kunlun Mountain Range, snowcapped year round. It was a surreal feeling to see snowy mountains alongside dry hot desert, it actually felt like I was on another planet.

The Silk Road spans approximately 4000 miles from east to west and has two gateways into China. The Jiayuguan Pass was one of these two, the most western fort of the Chinese empire and is said to be the “front door” of China.   I imagined what it must have been like to be a Chinese soldier in those times, being sent to a remote spot on the fringes of the Empire, and I squinted as I looked into the hot deserts around me, half expecting the arrival of the mighty Mongol hordes for which the fortress here, and the long wall were purpose built. The very name ‘Silk Road’ is of course linked to China, despite the roads long reach. Here, the finest Chinese textiles, crafts and goods set out to be distributed to Europe, to the Middle-East, to India, but it was Chinese Silk which was the most precious. In a time before air-conditioning, nothing is more suitable for hot-climes than the cool touch of silk, let alone it’s luxurious feel made popular by ancient aristocrats. Imperial China was for centuries the worlds centre of learning and science, of culture and commerce, and this is why Mongolians who were only familiar with a hard life of driving herds across barren steppes and near-constant clan warfare, would turn South-East for the chances of  seizing unimaginable riches, and the chance to take it easy for a season or two. 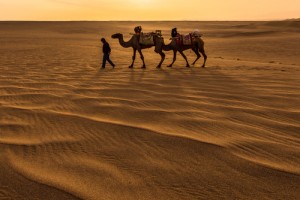 As one drives through the Gobi desert, you can regularly spot the ruins of beacon towers that were designed as an early warning system for the ancient fortress here, towering up out of nowhere.  These towers played an important role in defence as warnings of incoming invaders were communicated using smoke during daylight and fire during darkness to alert the fortresses Imperial garrison to prepare for invasion.  Of course, no Mongol armies arrive, yet, here I sit.  I snap a photo with my smart phone and send an image of the towers back to my sales team in North America, instantly communicating with people in several cities at once. I wanted my co-workers to see where I was, but I really sent it in tribute to these lonely watchmen atop of these crumbling beacon towers. How far we’ve come, I thought, and what a pleasure it is to see and feel and touch incredible places like this. 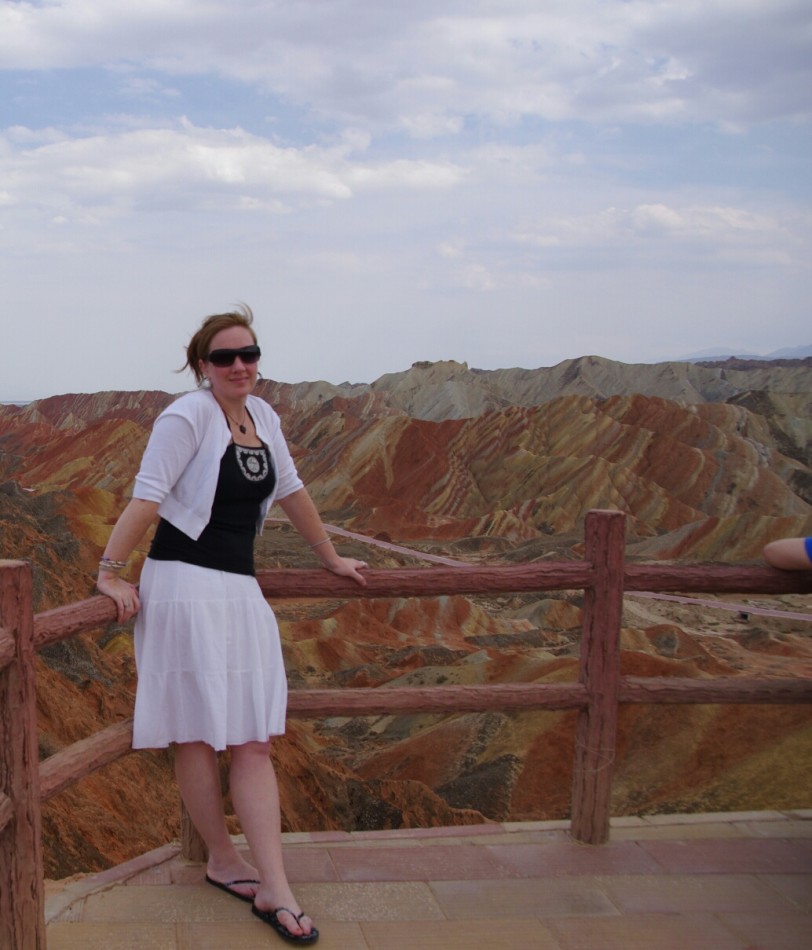 To say the least, the trip was worth it for this experience alone. Some of the fascinating sights along the Silk Road that should not be missed but had me in wonder were the Mogao Grottoes in Dunhuang. Known also as ‘The Caves of the Thousand Buddha’s’, this complex of 492 temples originally served as a place of meditation and solitude for monks before it became a place of worship for Buddhist travellers along the Silk Road. Pretty soon it became a place of pilgrimage for the worlds travellers, globetrotters, and adventurous few who made it out here. The paintings and statues show off the influence of different eras and cultures which seeped through the trade route. There are many tales of what went on, or was discovered in these caves as the years went by and as the sand dunes moved with the desert winds, many more caves were unveiled. One such story that I found most fascinating was that these caves were recently used as a prison of sorts. In 1921 the local authority in Dunhuang ‘contained’ Russian soldiers that were crossing the border in large numbers  to escape the civil war and fall out of the Russian Revolution (which was going on at the time). Some soldiers chose to destroy some of the many statues in these caves by cutting the hands off them, while their cook-fires caused smoke damage to several large paintings. To this day the damages to these relics remain as a reminder of the long-history of these wonders.

Dunhuang City was – and still is – a major stop on the Silk Road. Today’s visitors are travellers like myself seeking out remote places to experience. Two thousand years ago this desert oasis was the crossroads for this popular trade route. With the main road leading from India via Lhasa to Mongolia and Southern Siberia, it also was the control centre for the narrow Hexi Corridor that led straight to Xian in the south (the ‘home’ of the Terracotta Warriors). Not only was it a popular oasis for trade caravans exiting or preparing to enter the vast desert, it is also home to a beautiful crescent lake, Yueyaquan. Hidden behind massive sand dunes on the edge of Dunhaung town, this lake shaped in a form of a crescent moon creates a true mirage in the Gobi Desert. Arriving on the back (hump!) of a camel as the caravan-traders did long ago, upon the crest of a dune overlooking the lake, I found the worlds suddenly grew a little  bit smaller. We watched a Golden sun set behind these walls of sand, while the sound of the wind whistled over the tops of the dunes like a sleepy moan, giving truth to it’s namesake: called Mingsha Shan, the “Singing-Sand Mountains”.

Goway offers a 10 day private tour of The Silk Road starting at $2909USD or $3083CAD which explore the Mogao Grottoes in Dunhuang, the ancient city of Jiaohe and the colourful and exotic markets of Kashgar.

Maureen Atkinson is Goway’s Asia product & marketing manager, who recently returned from a trip which included a visit to the Gobi Desert in Western China.