Rapa Nui is (far) off the coast of Chile, and is one of the most remote and isolated inhabited islands on Earth. Steeped in history and a healthy dose of mystery, it’s more commonly known as Easter Island, and while it’s hard to get to, travellers around the world consider it to be on their bucket lists. With Air access limited to flights from Chile (6 hour flight from Santiago) or French Polynesia (6 hour flight from Tahiti) the number of visitors is also limited. 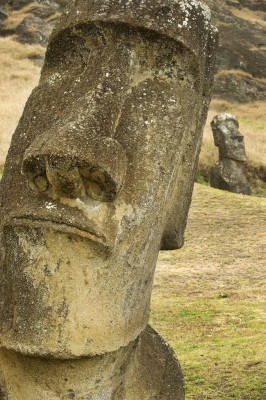 Other than the odd cruise ship that briefly stops by on an around the world trip there is no other way to access this remote destination, which in turn becomes one of its charms – it’s quiet and there’s no crowds.  The island is a triangular shape with 3 now extinct volcanoes in each corner, if there was no vegetation the surface would resemble the moon, the lush green landscape is eerily captivating.  Much of the coast is ragged and rocky with enormous surf, although there are a handful of pristine white sand beaches frequented only by a handful of locals and even less tourists.  Horses allowed to roam wildly can be seen near the shore, or all over the island and provide great photo subjects with dramatic backdrops.

Rapa Nui is quite literally an open air museum, while 40% of the island is actually a protected National Park.  There are nearly 900 Moai statues scattered across the island – the famous Easter Island ‘head and shoulders’ statues, which have fascinated the world for generations.  Thought to have been erected between AD1400 and 1600 archaeologists believe the statues may have been created in the image of important and powerful chiefs.  There are several theories on how the massive stone giants were moved, they are 13 feet high and weigh as much as 14 tonnes.  It is thought that the statues were toppled by the islanders when their civilization broke down. There is no written history and little accurate oral history so much is left to conjecture and theories making it all the more mysterious.

There are a handful of hotels of varying quality, but most could be considered ‘rustic’. But for those who seek luxury and adventure simultaneously the only place to consider staying is the Explora Rapa Nui. Located just under 4 miles (8km) from the main town of Hanga Roa is the incredibly stunning 5 star hotel. It’s all inclusive, family run and Chilean owned, and with sister properties in Chile’s Atacama and Patagonia regions, 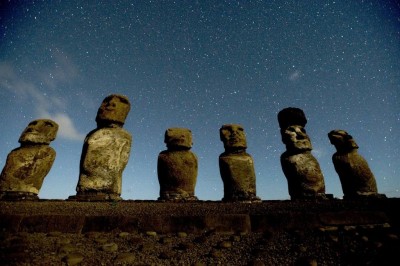 this hotel chain knows how to  deliver the true luxury Chilean experience.   Each room  in Explora Rapa Nui has a stunning view of the ocean,  and it’s top notch restaurant’s pair Chilean wine with delicious food.  The Explora hotel chain know’s luxury as well as they know adventurous and active lifestyles, and the hotels true charm is sitting with local guides and planning your activities for the next couple days, equally at home and pampered in luxury. Activities include horseriding and hiking, and groups from the hotel are never more than 8 people. Returning from an active day, you’ll be tempted by the amazing pool area, sauna, spa or jacuzzi, or unwind at the Explora Bar with your local guides and fellow travellers.

Most travellers stay around 3 nights on Easter Island, with very few staying longer than 1 week. Here are some additional links and a nice video showing the landscape and what travel is like to Easter Island, made by the Explora hotel, followed by an image gallery combing a few of Explora hotel images with our own staff photo’s from a trip there last year! 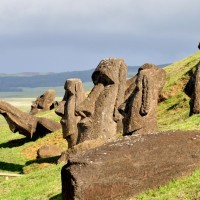