For many years, Goway’s Financial Controller, Bill Humphrey had wanted to travel to Namibia, ever since discovering that the country’s capital’s airport code was a match to his initials. The capital and main city of Windhoek’s Airport is WDH, the same as Bill’s initials, and this drove him to learn about the incredible sights and experiences it held. Finally, late last year he and his wife Theresa finally made the trek. After spending a couple of days exploring Windhoek they started exploring the central and northern parts of the country with Wilderness Safaris. Here’s Bill’s captivating account of his trip:

We landed at a tiny airstrip on the edge of the park around Sossusvlei which contains the highest and oldest sand dunes in the world. Seeing it from the air was spectacular, but Theresa was most excited because she saw some animals on our approach.

On the short drive to the lodge we saw new animals that we’ve never seen before ostriches, oryx and jackals; this in addition to many springbok. The oryx is the national animal of Namibia and has very impressive, distinctive straight horns.

Our cabin at Little Kulala is impressive, a large bedroom with all sides windowed out over the desert towards the sand dunes, an indoor and outdoor shower, a large outdoor sitting area with a private plunge pool, and even a sleeping area on the roof for falling asleep under the Namibian stars. At the lodge we had a wonderful lunch where we were on the deck overlooking a watering hole where we saw many many animals come down for drinks of water. 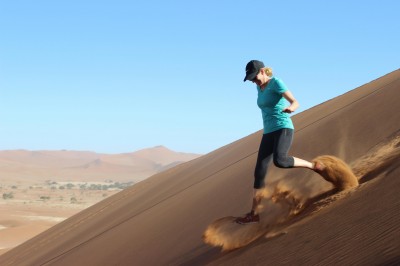 With our guide we explored the area around the lodge that evening. We learned of the natural history of the area with lessons on the different plants and the rock formations. Although we have now been both to the Sahara and to the deserts in Arizona, the best comparison we could come up with to the scrub grass and terrain we were seeing was the arctic tundra in our very own Canada – not that the temperature was similar. We enjoyed the drive, the scenery and our ‘sundowners’ and made it back to the lodge just before dark and just in time for an awesome dinner, a pork belly starter with a kudu fillet done perfectly for the main – not to mention the perfect bottle of wine.

The next morning our guide took us on a spectacular tour this morning through Namib-Naukluft Park. We drove through the park between the two incredible formations of sand. We stopped from time to time for photos of the dunes, animals and birds. After a short drive we hiked up a portion of a huge sand dune called Big Daddy and then ran down the side to explore Deadvlei, meaning dead pan. This is a petrified forest of Camel Thorn trees where all the trees have been dead for more than 1,000 years. It was so eerie and beautiful. It is something you need to witness for yourself because words cannot do it justice.

Dinner this evening was exceptional. We were seated beside a candle and lantern lit pool. It was nice and cool and we were sheltered from the breeze. The beef carpaccio and battered eggplant were delicious starters and the Springbok filets for our main were exceptional! It was another great day in Namibia! 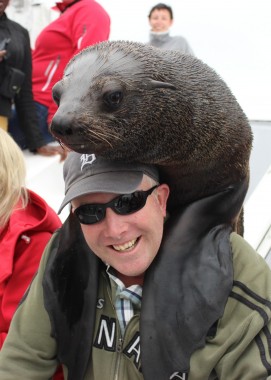 From there we were off to Swakopmund. The flight there itself was incredible. Our pilot flew very low up the western Atlantic coast where we could see many shipwrecks sites, seal colonies and the incredible sights of where the desert met the sea. In our 2 day there we had some fun – 4 wheel ATVing in dunes and a cruise to see dolphins, flamingos, pelicans and of course Cape Fur seals, a couple of which even jumped up into the boat for a visit!

From there we were off to the Damaraland further north in Namibia. Shortly after short flight we arrived at our new Wilderness Safari’s home for two nights, Doro Nawas Lodge we headed out for our evening drive to see the famous desert adapted elephants. 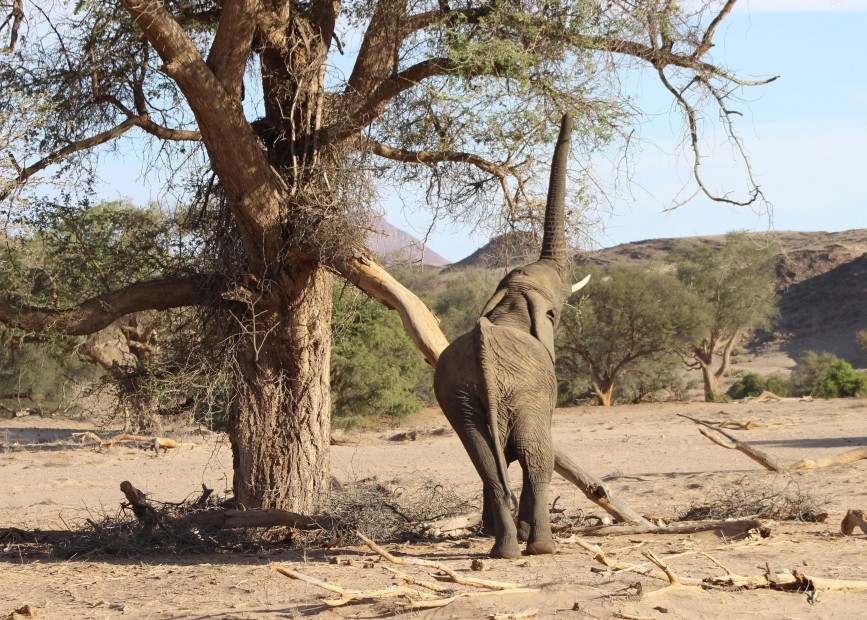 Shortly after we left the lodge we saw an ostrich, then a sheep, and then goats. The lodge is near some villages and people raise livestock here. It is hard to imagine when there is not an abundance of feed and water. The villages are made up of a few or many buildings, mostly constructed from branches and roots, although some are cinder block buildings.

We did also see some wild animals, some oryx, steenbok,springbok, then some desert elephants. We drove back to see the rest of the herd, then followed their progress to the watering hole. A few times we leapfrogged ahead to watch them approach. The desert elephants are smaller than the African elephants. 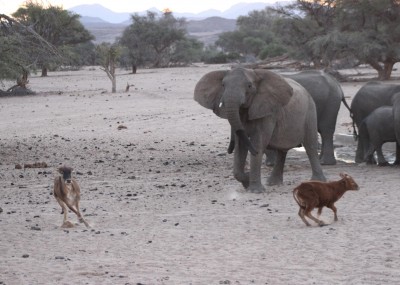 We witnessed the utter and complete mass destruction of the village watering hole and the bullying of young bull and cows. Their behavior reminds me of our pesky raccoons back home At one point the baby elephant ripped a tube down from the water tower. It looked like he was sipping a drink through a straw! 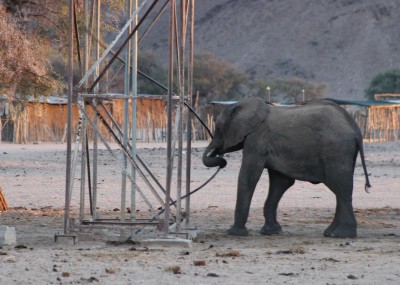 The next day we took in the history and culture of the area.  Ancient rock carvings, awesome rock formations and even a visit to a traditional Damara village where we got a look at life in Namibia as it has been for 100’s of years.  Finally back to the lodge for another spectacular dinner
As much as we loved our time in Damaraland, we were both very excited to see the game viewing at Etosha National Park.  After a very bumpy ride in a very small airplane we made it to Ongava Tented Camp.  Another great Wilderness Safari facility with top-notch accommodations, food and above all else animals… 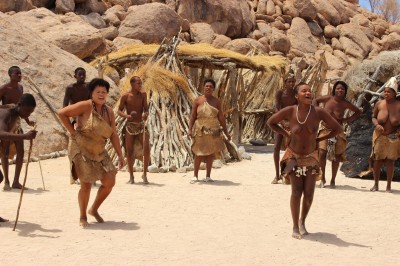 On our game drive through Etosha we saw Elephants, Lions, Kudu, Giraffe and many, many, Springbok.  The highlight of the day was the Nebrowni Watering Hole. Our guide had heard that one of the male Black Rhinos was there.  We arrived just in time to see him finish drinking and then he started heading out to eat.  It was incredible to see such a wide selection of animals at the same place at the same time.

The last day of our Namibia trip continued to be amazing with another game drive that evening that included amongst other things sightings of the elusive Honey Badger, giraffe and sundowners close to two male lions and an amazing sunset to boot!