No need to take out your wallet to enjoy these 18 suggestions for touring, trekking and tanning in Israel’s city by the sea. Tel Aviv is one of the world’s top destinations. This city-by-the-sea is consistently included by travel magazines among their best picks.

From beach boardwalks to green parks, trendy shopping to awesome nightclubs, museums to open-air markets, there’s more than enough to do in Tel Aviv.

Even better: There are oodles of free options in the city. ISRAEL21c chose 18 of the best things to do in Tel Aviv without spending a shekel. 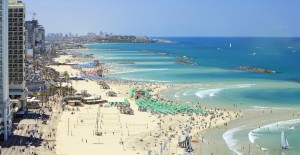 1. Beaches
Tel Aviv’s west side is a 13-kilometer (eight-mile) stretch of sandy beaches, prompting National Geographic magazine to call Tel Aviv “Miami Beach on the Med”. You can’t really go wrong no matter where you set down your towel. Gordon Beach is one of the most famous, attracting tourists, locals, joggers and sun-tanners all year round. Stop by Saturday mornings in winter (11am to 2pm) or evenings in summer (8pm to 10pm) and give public Israeli folk dancing a whirl. Banana Beach, located on the southernmost edge near Jaffa, draws the bohemian crowds on Friday evenings for drum circles, singing and dancing. Metzizim Beach draws a smattering of everyone to its sandy shores. Catch a game of matkot (paddleball) or bring your kids to the children’s playground. Hilton Beach (near the hotel) is the gay beach, and Jerusalem Beach is also very LGBT friendly. So pack your lotion, towel and good book to read – sandy Tel Aviv on the shoreline of the Mediterranean Sea awaits.

2. Tel Aviv-Jaffa Promenade
The Tel Aviv-Jaffa Promenade is a bustling walkway that connects Old Jaffa in the south to the northern neighborhoods of the city. Come here for gorgeous sunsets, people-watching, yummy food at one of the cafés or restaurants along the promenade, or to hear some of the best classical music buskers you’re likely to come across.

3. Hayarkon Park
Known as the green lung of the city, this “Central Park of Tel Aviv” attracts some 16 million visitors every year. The urban park’s 3.8 square kilometers boast walking paths, bike paths, dozens of children play areas, botanical gardens, extensive lawns, sports facilities, two mini zoos and artificial lakes. The park also houses paid entertainment options including an aviary, a water park, a climbing wall, a children’s train and paddleboat hire. You can follow the Yarkon River all the way from North Tel Aviv down to the Mediterranean Sea.

4. Old Jaffa
No visit to Tel Aviv is complete without a hop over to Old Jaffa. It is one of the world’s oldest cities and home to the oldest seaport in the world. In the last decade, Old Jaffa has become one of the hottest places to be as designers, artists and gourmands move in. Come hungry because street food is abundant and delicious. Don’t miss the famous Clock Tower, the flea market, restaurants, designer stores, galleries and museums, the Old Port and the NaLaga’at Center artistic complex operated by the Muslim-Christian-Jewish deaf and blind community.

5. Tel Aviv Port
Tel Aviv’s port is one of the city’s main entertainment hubs with trendy shops, bars, nightclubs, cafés and a bustling farmers’ market. Thousands of residents and tourists walk along the uniquely designed wooden deck promenade to take in the salty sea breeze, gorgeous sunsets and to feel the vibe of Tel Aviv. There’s a huge sand pit for kids to play in. Weekends are busiest, with buskers and balloon artists keeping the crowds entertained. The port also hosts numerous outdoor festivals throughout the year.

6. Carmel Market
This is not just another produce-and-clothing market; the Carmel Market is the heartbeat of Tel Aviv. You don’t have to come to shop. Instead, jostle past the colorful stalls and take in the smells and sights. Some vendors are known to sing out the prices of their goods – which range from spices to dried fruits, fresh produce to fish and souvenirs. Trendy cafés and gourmet food stands are also part of the scene. The market runs between the corner of King George and Allenby streets and the Carmelit Bus Station. It is open every day from 7 to dusk, except for Fridays when it closes one hour before the Sabbath.

7. Levinsky Market
The Levinsky Market is the place for spices. And dried fruits, nuts, traditional pastries, boutique cheeses, pickled produce, exotic meat cold cuts and salted fish. The climax of activity is on Friday mornings, as residents pack narrow Levinsky Street to visit their favorite delicatessens, bakery shops, roasted nut stalls and spice shops. If you do head to this market, start or end your tour in the neighborhood of Florentin – Tel Aviv’s SoHo of the über cool and working class. Photography buffs take note: Levinsky Market is one of the best places to shoot in Tel Aviv.

8. Nahalat Binyamin
The Nahalat Binyamin Arts & Crafts Fair takes place every Tuesday and Friday along the pedestrian mall. More than 200 Israeli craftspeople and artists set up stalls to exhibit and sell their unique and often humorous creations. It’s an outdoor fair with street performers, clowns and musicians providing free entertainment for visitors. The market is open on those two days from 10am until sundown.

9. Neve Tzedek and historic train station (Tachana)
Neve Tzedek is one of Tel Aviv’s most beautiful neighborhoods – and historically, was the first neighborhood built outside of Jaffa. It’s perfect for a romantic stroll along the small streets and alleyways and past the beautifully restored buildings. The Suzanne Dellal Center dance and theater complex sits at the heart of this neighborhood, and a visit to its courtyard is a must. The neighborhood has hip cafés and gourmet restaurants as well as designer stores, boutique hotels, and lovely shops. On the southern edge of the neighborhood is the historic train station known as the Tachana. This newly-restored compound now serves as a cultural and shopping center.

10. Bauhaus Architecture
Tel Aviv boasts a treasure trove of exemplary architecture.
One of Tel Aviv’s nicknames is even the White City, thanks to its large number of white Bauhaus (International-style) buildings. In 2003, the United Nations Educational, Scientific and Cultural Organization (UNESCO) proclaimed Tel Aviv’s White City a World Cultural Heritage site. Take a self-guided stroll down Rothschild Boulevard, Dizengoff Street, Bialik Street or through the Neve Tzedek neighborhood to see the best buildings the White City has to offer. Or, join a city-sponsored free walking tour of Tel Aviv focusing on the architectural styles of the 1930s.

11. Free Walking Tours
The best way to the see the city is on foot and the municipality has set up free, English-language guided tours of Tel Aviv’s top sights as well as a series of go-it-alone tours. For the guided tours, there’s no need for advance booking, just show up at the meeting point. The White City tour, every Saturday at 11 (except for Yom Kippur) focuses on the Bauhaus architecture along Rothschild Boulevard and tells the story of Tel Aviv. Meeting point: 46 Rothschild Street (corner of Shadal Street). The Old Jaffa tour, every Wednesday at 9:30am, winds through the Flea Market, the Old City area, past some of the city’s archeological sites and up to Hapisga Garden. Meeting point: Clock Tower. The Tel Aviv University tour, every Monday at 11am. (except for Jewish holidays, the week of Sukkot, the week of Passover and during the last week of August), gives an introduction to the Israeli architecture on campus, the styles, international influences, stories of buildings and architects, environmental sculpture and landscape design. The tour is offered in cooperation with the Friends of Tel Aviv University. Meeting point: Dyonon bookstore, campus entrance (intersection of Haim Levanon & Einstein streets). Maps for the DIY self-guided tours can be picked up at the municipality’s Visitor Center.

12. Tel Aviv Greeters
Tel Aviv Greeters offer free walks of the city with local residents. It’s a volunteer program that matches visitors with residents who just want to share their love of the city. The Tel Aviv Greeters are part of the Global Greeter Network, an informal virtual association of Greeter programs around the world. Walking the city with a local is a great option for families, groups of friends or solo travelers. The Tel Aviv Greeters will take you wherever you want to go – or take you to one of their most requested hotspots including Neve Tzedek, Yemenite Quarter, Tel Aviv Port, Hayarkon Park, Florentin Quarter, Old Jaffa or even the beach. It’s totally free and visitors are not allowed to give tips.

13. Culture Square
Tel Aviv is Israel’s culture city. Most of the museums, orchestras, theaters, art galleries, dance venues and music halls come with an entry fee, however. To get a taste of the city’s arts scene, head over to Culture Square at the end of Rothschild Boulevard. Here you’ll find the historic Mann Auditorium, home to the Israel Philharmonic Orchestra, the recently renovated Habima National Theater and the Helena Rubinstein Pavilion for Contemporary Art — all facing a gorgeously designed public courtyard with a small flower garden, water fountain and dozens of families frolicking among them.
The pavilion showcases changing exhibitions, reflecting diverse fields and practices in contemporary Israeli and international art – and is free to the public.

14. Dizengoff Street
Strolling down Dizengoff Street is a favorite pastime for many residents.
For great people-watching or just a place to take a break, park yourself on one of the benches around the Fire & Water Fountain. The fountain is located in Dizengoff Square, which shows off creations by young Israeli industrial, graphic, fashion and plastic designers every Thursday from 4-11pm, and an antique-flea market every Tuesday and Friday.

15. Tel Aviv Rollers
Every Tuesday night in Tel Aviv as many as 400 in-line skaters hit the streets through a loose confederation nicknamed the Rollers. Police escorts are on hand to keep the skaters safe as they zip along a 20-kilometer route past the city’s night spots. If you’ve got a pair of skates, don’t miss this high-energy fun. Meeting point: Habima National Theater, 10pm.

16. Tel Aviv University’s Botanical Gardens
The magnificent Botanical Gardens are located at the heart of Tel Aviv University. Stretching across 34,000 square meters, the gardens serve as a meeting place for the world’s different species of flora and fauna. Visitors are encouraged to take a closer look at the plant museum from Sunday to Thursday, 8am to 4pm. But call ahead (+972-3-640-9910) because the garden is also used as an outdoor class for students at the university.

17. Rabin Square
The main plaza just outside City Hall is known as Rabin Square, named for Israeli Prime Minister Yitzhak Rabin. He was assassinated on November 4, 1995, after a peace rally in this square. A monument to Rabin stands at the spot where he was killed. Israeli sculptor Yael Ben-Artzi used 16 basalt stones from the Golan Heights and sunk them into the earth to symbolize Rabin’s deep connection to the land.

18. Ben-Gurion House
One of the smallest museums and likely the most overlooked is Ben-Gurion House, a historic house museum at 17 Ben-Gurion Boulevard that served as an additional residence for Israel’s first prime minister, David Ben-Gurion. Visitors can see Ben-Gurion’s library, his family’s sleeping quarters and the study where he worked. Take a free guided tour of the house and learn about Ben-Gurion’s life work.