This North African gem can be an easy escape.

Perched on the north-west coast, separated from the rest of Africa by the vast Sahara Desert, Morocco is synonymous with the exotic. Beat writers including Ginsberg and Kerouac drew inspiration from its chaotic streets and souks. Countless film crews – most recently for Game of Thrones – have been drawn to its vast deserts, impressive mountains and ancient ruins, while its largest city served as both setting and inspiration one of Hollywood’s greatest classic films. 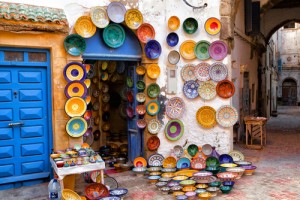 Morocco tours and exotic getaways have been a European favourite for decades. Yet despite its profound influence on broader culture, few North Americans understand what the country is truly about. Visitors can wander ancient Roman ruins, feast on delicious cuisine and drive a hard bargain in centuries old souks (markets), all in one day if desired.

It’s also a very safe introduction to this part of the world. While Egypt and Tunisia have been slow to reopen to tourists following recent strife, Morocco has remained a stable, welcoming and utterly mesmerizing slice of Northern Africa.

Goway Travel’s Exotic Morocco trip is a 9-day journey from Casablanca. It takes in four of Morocco’s great cities including the capital Rabat, spiritual Fes, and Marrakech, the most romantic of Moroccan cities. Also on the itinerary are the imperial city of Meknes and the Roman ruins of Voulibilis.

Right now, the Africa experts at Goway are offering travellers a saving of $800 per person on Exotic Morocco. Prices start at US$2320 (ex New York) and CA $2688 (ex Toronto), including international airfare with Air France via Paris (this stopover is not included… but highly recommended!), all taxes, 7 nights 4-star accommodation, daily breakfast and dinner, 6 lunches, guide and driver, all sightseeing and entrance fees, plus porterage at airport and hotels.