First on the list for first-time travellers to Africa is often the “Big Five”. The Big Five are ofcourse 5 animals who were once regarded as the hardest prey for Big Game Hunters, and Safari operators still use the term today. They are the Rhinoceros, Lion, Leopard, and Cape Buffalo. So yes, they’re important, they are all spectacular animals in their own right. But a safari is so much more than just those elements. In the words of Robin Smulders, one of our Africa Expert’s, “In Samburu we passed another vehicle, and as is typical on safari, we shared our sightings. They said “We’ve seen nothing all morning…nothing.” Robin responded, “”Well we have seen a chameleon, a turtle, tons of dik dik, a family of mongoose, loads of birds… we have seen lots!”

So we asked some of our Africa Experts what their favourite animals to see on safari are, and they are as diverse as the safari experience.

My favourite animal is a baboon! Don’t laugh, I know most people hate baboons, or find them extremely ugly but I can sit for hours watching their antics. I think it is because they are so human like, particularly when they have babies, I just love the way the look after them, pick them up and put them on their backs or carry them hanging from their tummies. Despite the Alpha Males who can be quite aggressive, baboons are actually very caring and nurturing. They live in social groups (troops) which possess a complex group behavior and communicate by means of body attitudes, facial expressions, vocalizations and touch. Adoption behavior has also been observed in chacma baboons as well as friendship pairings between males and females. These are the most common in Southern Africa and are also known as Cape Baboons. Here in Cape Town we do have a bit of a problem as they have become regarded as pests – many a time they have been into my families homes and found rummaging through the fridge, or sitting on the kitchen counter helping themselves to whatever they can find. This particular population is thought to face extinction in the next 10 years so have now become protected.

In fact I am rather partial to all of the Ugly 5 as well (Warthog, Hyena, Wildebeest, Marabou Stork and Vulture). I must like to support the underdogs! Kirsty Perring.

At first you think “That is the cutest tiny little deer, it looks like a baby Bambi!” Then you learn that it’s fully grown, and called a dik-dik! I realize a number of things are running through your head about the name, but the term “dik-dik” is onomatopoeic of the (larger!) female dik-dik’s warning call.

The dik-dik is a small antelope that lives in the bushlands of eastern and southern Africa. Although they only stand 14-16″ tall, they can run at speeds of up to 46km (26mi) per hour! Dik-diks are one of the few animals in which the male and female mate for life. Besides sounding wonderful for those who believe in true love, being monogamous saves lives. It’s easier to avoid predators when not looking for mates… and with somebody around to watch your back! Robin Smulders and Natasha Case

Hippo’s are my favourite! After the elephant and rhinoceros, the hippopotamus is the third-largest type of land mammal by weight typically 1½ to 3½ tonnes. They spend up to 16 hours a day submerged in rivers and lakes to keep their massive bodies cool under the hot African sun. They are graceful in water, good swimmers, and can hold their breath underwater for up to five minutes. The hippopotamus is one of the largest quadrupeds and, despite its stocky shape and short legs, it can easily outrun a human. Hippos have been clocked at 30 km/h (19 mph) over short distances. The hippopotamus is considered one of the most dangerous animals in Africa. Nevertheless, they are still threatened by habitat loss and poaching for their meat and ivory canine teeth.

The most amazing raft of hippos that I saw was at AndBeyond Lodge Grumeti (Serengeti), there were probably more than 100 of them in the Grumeti River, just in front of the lodge, to see them yawning was such a thrilling experience! Did you know that a hippo can open its mouth wide enough to fit a 4 foot tall child inside? Ronika Puddoo

Hyena! Love them. There is just something amazing about them. One of my fondest memories is watching a mom and 3 cubs playing in the Moremi. I think they are very misunderstood and get a bad rap.

Although hyenas are branded as sly scavengers guests, they are excellent hunters and very social animals. Hyenas laugh as a way of communicating their status to other hyenas. Hyenas are highly intelligent animals and possess the strongest jaws in proportion to body size of all animals. Carrie Bell

Flamingos are just beautiful, they can be found in warm, watery regions, they are surprisingly fluid swimmers, they live and feed in groups called flocks or colonies. They find safety in numbers, which helps to protect individual birds from predators while their heads are down in the mud.
Young flamingos are born gray and white and do not turn pink for two years, Shrimplike crustaceans are responsible for the flamingo’s pink color. The birds pale in captivity unless their diet is supplemented.

At certain times of year lakes in East Africa, such as Lake Nakuru and Elmenteita, turn pink from the vast flocks of flamingos. Roudayna Nehlawi 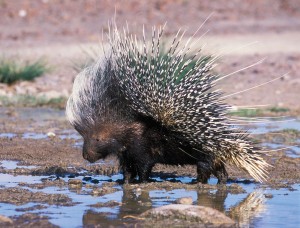 Though not easy to spot in the wild, as they are mostly nocturnal, it’s such a treat to see the elusive porcupine. The word porcupine means “quill pig” in Latin; however, porcupines are large rodents and have no relation to pigs. The porcupine’s most recognizable feature is, of course, its quills. Quill length varies on different parts of the body, ranging from 1 inch to 1 foot on the back. Usually, the quills lie flat against the body, but if danger threatens, the porcupine raises and spreads them. Scales on quill tips lodge in the skin like fishhooks and are difficult to pull out. New quills grow in to replace lost ones.

It warns potential enemies of its defense system when alarmed. The porcupine will stamp its feet, click its teeth, and growl or hiss while vibrating specialized quills that produce a characteristic rattle. If an enemy persists, the porcupine runs backward until it rams its attacker. The reverse charge is most effective because the hindquarters are the most heavily armed, and the quills are directed to the rear. Kajal Gadhia

I had the pleasure of seeing a genet regularly at dinner while staying 2 nights at the Sanctuary Saadani Safari Lodge. It had become accustomed to coming around the dinner table and checking with guests for any food scraps.

Genets are dispersed throughout Africa and are found across a variety of habitats that have dense vegetation—including woodlands, savannas, and forests (native to more than 25 African countries!).

Although classified as a carnivore, the genet is omnivorous and will eat what is most readily available. This can include small mammals—especially rodents, shrews, and bats—birds and their eggs, frogs, millipedes, centipedes, scorpions, and various fruits.

They are resourceful, acrobatic, and can squeeze their flexible bodies through any opening larger than their heads. The genet favors a solitary existence, and has a foul method of self-expression producing secretions conveying messages about sexual, social, or territorial behavior. When angry, frightened, or injured, the genet can squirt a foul-smelling substance that deters enemies. It arches its back and grooms itself in much the same way as a cat. David Wong 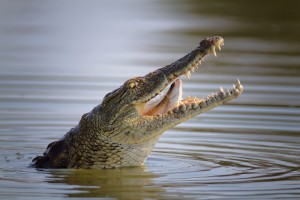 My favorite animal is the African Crocodile. Africa’s largest crocodilian, these primordial brutes reach a maximum size of about 20 feet and can weigh up to 1,650 pounds. They live throughout sub-Saharan Africa, the Nile Basin, and Madagascar in rivers, freshwater marshes, and mangrove swamps. The Great Migration has to cross the Mara River in the Maasai Mara where crocodiles will prey on them. This is one of the highlights as the animals try and cross the Mara River alive.

One unusual characteristic of this fearsome predator is its caring nature as a parent. Where most reptiles lay their eggs and move on, mother and father Nile crocs ferociously guard their nests until the eggs hatch, and they will often roll the eggs gently in their mouths to help hatching babies emerge. Amber Cammish.

My latest favourite animal (after my recent fantastic trip to Botswana) is the Red Lechwe. The lechwe, is an antelope found especially in the Okavango Delta. They are golden brown with white bellies. Males are darker in colour. The long, spiral-structured horns are vaguely lyre-shaped, they are found only in males. The hind legs are somewhat longer in proportion than in other antelopes, to ease long-distance running in marshy soil. They are semi aquatic and are found in marshy areas where they eat grass and aquatic plants. They use the knee-deep water as protection from predators. Their legs are covered in a water-repellant substance which allows them to run quite fast in knee-deep water. While a single Lechwe looks ordinary enough, when you see a herd of them skimming the water at full speed it is an awesome sight! Jervin Randria 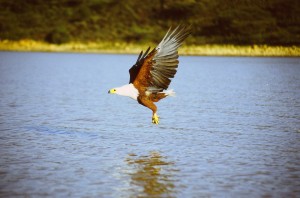 I know I’m truly back in Africa when I hear the haunting cry of the African Fish Eagle. These are a familiar sight on the waterways of sub-Saharan Africa and their call, once heard is not forgotten. These eagles perch on branches overlooking the water, swooping down to catch fish which are then carried back to the perch or dragged to shore if too big to carry.

African fish eagles also eat birds, monkeys and even crocodile hatchlings. These efficient predators can get away with spending as little as 10 minutes a day actively hunting. It’s distinctive plumage makes it one of the most recognizable birds of prey. Zambia has adopted the Fish Eagle (or Nkwazi) as their national bird. Moira Smith