The regal King Penguin is the second largest penguin on Earth, a magnificent looking bird and a co-operative model for photographs!  Only the Emperor Penguin is larger, with the King Penguin weighing up to 35 lbs (16kg). A hardy creature, the shorelines where King Penguins call home are harsh and unforgiving landscapes around Antarctica and the Southern Atlantic and Southern Pacific Ocean. Taking to the sea is essential for them to find food, where they’re adept hunters of small fish and squid, but eat a wide range of sea-life where the opportunity presents itself.

Around September to November, breeding season starts, with mates sticking together for 1 year to raise chicks, occasionally getting back together the following season. As the female penguins lay their eggs around December, the mating pair then share the vital role of keeping the egg warm by balancing it on their webbed feet, and tucking it under a roll of fat to insulate it, while their partner spends a day at sea hunting for fish. Upon hatching, the chicks are extremely vulnerable, and the process is continued until the chicks develop enough feathers to stay warm to allow both parents to hunt at the same time. They return with half-digested fish for their chicks, but visitors to King Penguin rookeries will remark that while there are huge groups of chicks and parents together, some chicks clearly aren’t welcome – this is due to the realities of parenthood in such a harsh environment: you can only take care of your own kids! So a lonely chicks parents have either not returned or fared even worse at sea, and they won’t find any comfort from their neighbours. That said, the adults do protect all chicks from any predators wherever they can, such as a Skua, an aggressive sea-bird. As winter sets in around April and May, the surviving chicks are at that point almost as tall as their parents – necessary for them to make it through the winter, where a long spell of hunger and fasting sees all King Penguins lose significant weight. Over a year after having been hatched, the young King Penguins are finally ready for the open sea, a time when fish are plentiful.

Interestingly, King Penguins make it a habit of returning to good breeding grounds year after year. Occasionally  a few brave ones start a new location, but most Kings return to where they themselves were born. Within destinations such as the Falkland Islands, which are famous for their King Penguin rookeries, there would be a beach where an exact spot is identified and often marked by a circle of small rocks – and year after year, the Penguins will arrive on this small spot and lay their eggs. With virtually no land predators, the King Penguins are unafraid of humans. While they may waddle off at the first approach of people, their curiosity gets the better of them, and they’ll turn around and come over to inspect the new arrivals. People are prevented from entering the said ‘circle of rocks’, to ensure no eggs are overturned or young chicks frightened, but the entire experience is a photographers dream, and a very enjoyable moment with a friendly and peaceful creature at the bottom of the world. 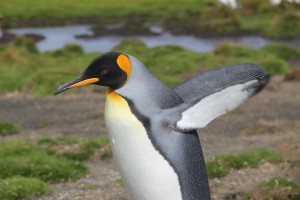 Arguably the most accessible King Penguin rookerie is that of Volunteer’s Point in the Falkland Islands. Here, a two hour drive over rough terrain from the main town of Stanley, is a large and healthy King Penguin Rookery, with a dramatic sandy beach which creates fantastic photo’s of King Penguins emerging from the sea. A clearly marked circle prevents anyone from stumbling into where the chicks are resting, while two park rangers live there for their protection, studying and monitoring them along the way.

For travel ideas for Penguin enthusiasts, we are seeing great prices on 2 two great itineraries for the Falklands. Here, Penguins outnumber humans 30 to 1, so Penguin sightings and encounters are guaranteed, and would probably include the King Penguin’s cousins the Magellenic, the Gentoo’, Rockhoppers, and the rare Macaroni Penguins! These 2 trips are the 8 day Falklands Wildlife from $3535, and the 8-day Wildlife and Battlefields itinerary from $3745. Of course it is easy enough to fully customize your trip to the Falklands, as depending on travellers’ interests, we could focus your trip on the very interesting Falkland Islanders, on Wildlife, there’s the fascinating Falklands War history, or special interest activities such as photography or fishing, even farm tours! 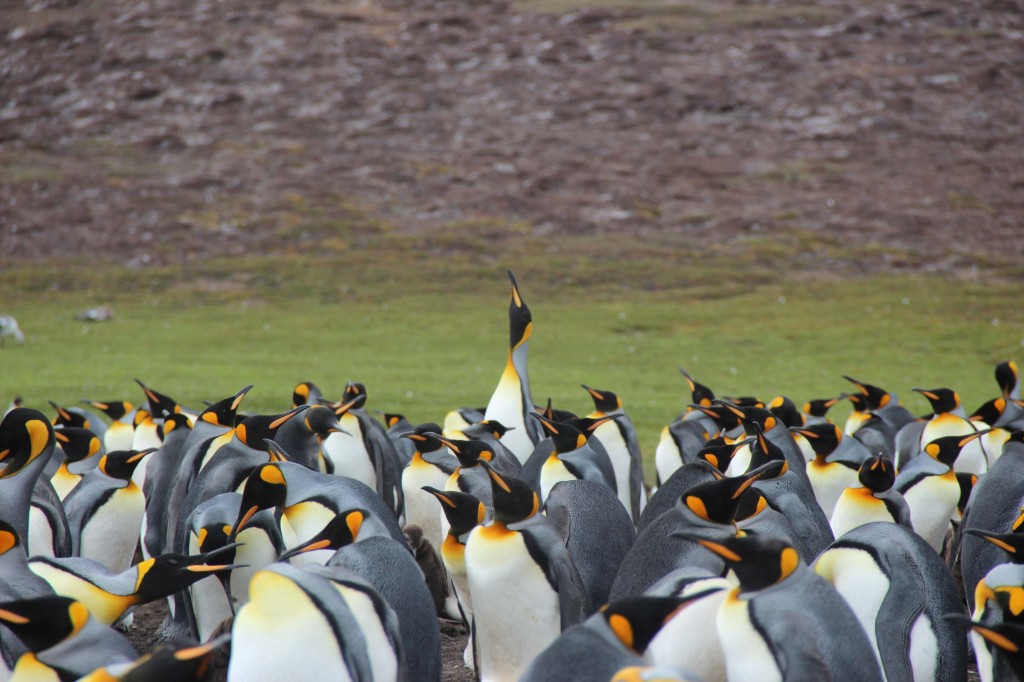