Most people have heard of the Tasmanian Devil, almost entirely due to the Warner Brothers cartoon character, Taz. They are of course a real creature, found only on the remote island south of Australia. However in recent years a pandemic has ravaged the ‘tassy’ population, with a gruesome and deadly ‘facial tumor’ spreading fast amongst the rather cute critters. Tasmania has reacted in several ways, but managing a wild animal population is at the best of times difficult, let alone dealing with a small, rare, and extremely sneaky animal. 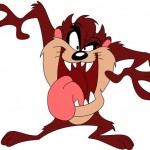 But recently on Maria Island, a small island off of Tasmania’s east coast saw 11 healthy ‘Devils’ introduced, where they will slowly be joined by another 50 captive and/or wild devils to grow a healthy, wild population of the iconic animals. The project has been a noted success, with hikers in the area reporting many sightings of ‘devils’.

However, in Tasmania these creatures are legendary for running off and destroying campers gear, including boots, shovels, pots and pans, camera bags… But no one can blame them trying to live up to their namesake.

One such tale came out of this project, as there has been some fear that the previously captive devil’s would not be afraid of humans. While the culpret in question certainly ran off, alleviating scientists fears, this particular devil stole someone’s hiking boot, couldn’t fit it through a nearby fence, so decided to finish off the boot off with a couple large bite-marks and a generous amount of slobber. The hiker finished their remaining hike wearing crocs, cross.

Tasmanian devils typically steal things like shoes, low-hanging laundry, beach towels and socks for their dens. Despite all of this, the humans calling Tasmania home are happy to hear the success of this breeding project.

Tasmania is a fascinating destination in Australia, typically done by ‘second-time’ travellers to Australia, who rave about it’s really interesting (and spooky!) convict history, great hiking (40% of island is dedicated to national parks) and of course, the devils! Here’s some travel ideas to Tasmania. For the specific hike the mentioned above, checkout our 4 day Maria Island hike.