The following article by Ian Stalker, based on an interview of Bruce Hodge, president of Goway Travel, appeared in Canadian Travel Press, December 16, 2013. Ian and the Canadian Travel Press are, respectively, among the most respected travel writers and publications in Canada. Bruce visited the Falklands with his family in 2013.

Nothing like a good, foot-stomping soccer game to reassure tourists that they don’t need to tiptoe gingerly in a former conflict zone …

Goway founder Bruce Hodge – whose company offers year-round trips to the Falkland Islands, which Britain and Argentina went to war over in 1982 – reports that the islands are home to as many as 25,000 anti-personnel and anti-tank mines, a legacy of the brief fighting.

But he reassures that “no one should fear stepping on mines” as they’re now contained in fenced-off fields with blunt signs warning people to stay outside the barriers.

“The locals believe efforts to remove them are a waste of time and that money could be better used in Third World countries, where they really are a ‘real’ problem, Hodge says.

But the Falklands mine fields are something of a curiosity for visitors, who can easily spot no-go areas found near roads and “surrounded by fences, which is as close as one should go,” Hodge sensibly observes.

Hodge says other reminders of the war include wrecked aircraft, graves and memorials, and those visiting the Falklands can also spot five species of penguins, albatross and sea lion colonies, and “step back in time,” seeing a community that will recall a “small English town in the 1950s.”

The Falklands is working at removing mines and recruits Zimbabweans – whose own country saw a huge number of mines planted when a conflict raged there decades ago and who have become adept at locating and removing the explosives-packed weapons – to clear the hidden ordinance.

And Hodge says once the Zimbabweans clear an area of mines, they provide a convincing demonstration that it’s safe for all to tread on.

“To prove they have cleared an area of mines, the Zimbabweans have a soccer game (on that area). It is a little unusual, but very effective in proving to the world that it has been cleared properly. Would you play soccer on a field that might have mines that could kill you?” he asks.

USEFUL LINKS:
• Visit Falklands Travel Information for other useful information including History, Wildlife, War of 1982 and more including a conservation calendar
• 8 day Falklands Wildlife and Battlefields 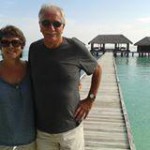 President and Founder, Goway Travel - Goway Travel started in Bruce’s Toronto apartment in 1970 with a telephone and an atlas. A former Australian banker turned tour-guide, seeing the world became his most recommended personal investment, and has since created a world company specializing in long-haul destinations for real travellers. While his bucket list only gets longer, he has run the Athens marathon, climbed Mt Kilimanjaro and bush-wacked in Papua New Guinea, he’s actually a closet-magazine editor who loves nothing more than using his scissors, red pen and glue stick to add the final touches to the latest brochure. While 40+ years in North America have made him appreciate all weather conditions, as an Aussie all his staff know he’s waiting to buy them a round on Fridays at the local office pub - rain, snow or sunshine.