Three gorilla groups recently completed Uganda’s gorilla habituation program, bringing the total number of groups available for trekking to 19 and the total number of daily gorilla trekking permits available to 152. The addition of these groups helps meet increased demand for gorilla trekking permits in Uganda following the tourism board’s concentrated marketing efforts in North America and Europe and the increased price of gorilla trekking permits in Rwanda. The gorilla habituation process takes approximately two years. During this time, groups of six to eight researchers encounter the wild families on a daily basis, continuing until they become comfortable around humans. The newly habituated groups are located in the Rushaga, Nkuringo, and Buhoma sections of Bwindi Impenetrable National Park. Permits can be reserved up to two years in advance through Goway Africa.

Mountain gorillas may be Uganda’s biggest draw, but they aren’t the only primates hanging around the country’s forests. Chimpanzees can be found in a number of different areas, and chimp trekking offers wildlife lovers a fast-paced adventure following these playful primates as they cover ground and swing through the treetops. Approximately 5,000 chimps live in Uganda, and several locations offer chimp trekking experiences. Kibale National Park in Western Uganda is known for its primate population, which consists of nearly 1,500 chimps and 13 other species, including the L’Hoest’s Monkey, East Africa’s largest population of the threatened Red Colobus Monkey, Blue Monkey, Bush baby, and more. Here, visitors will have the best chance of seeing chimps on their trek. On the outskirts of Murchison Falls National Park, the dense Budongo Forest is one of the best places in the country to spot chimps. In Queen Elizabeth National Park, a location best known for its hippos and tree climbing lions, a population of chimps can be found in the 100-meter-deep Kyambura Gorge in the park’s northeastern region.

Chimp trekking can be done year round, though the drier months of June – September and December – January are ideal. Daily trekking experiences at each park offer participants the opportunity to spend one hour with the chimps after they are located. Between October and June, Kibale, and Budongo allow two visitors the chance to spend the entire day with the chimps. Chimp trekking groups are limited to a maximum of six people, and participants must be at least 15 years of age.

With Goway, travellers can head on a 4-to-5-day Mountain Gorilla Encounter or a 6-day Gorilla Express trip to see the mountain gorillas. Travellers can also take a more intensive 10-day Essential Uganda to see the great apes. There’s even a luxurious 4-day Stay of Distinction that includes daily gorilla treks while staying at a pampering 5-star accommodation. 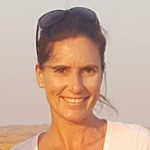