Taking advantage of Denmark’s long June days, I broke up a summer book tour with a few days in Copenhagen… all while being on crutches! Although a full week would’ve been ideal, Copenhagen makes a wonderful stopover destination for any Europe tour.

My first look at Copenhagen’s best known symbol comes from the back. It’s a little bronze statue of a girl with a fish tail sitting atop a rock near Copenhagen’s harbour shore. And right behind her, at least two dozen tourists are trying to find the perfect photo angle.

It’s my first day in Copenhagen, Denmark, and a canal tour on the water has saved me trekking out to see The Little Mermaid, instead taking me in nice and close for a rear-view photo. I’ll have to come back another time to see her face, but since fate had put me on crutches (another story!), saving the “walk” is a more than fair trade.

One of Europe’s most historic and picturesque port cities, Copenhagen is ideal for exploring on the water. Informative canal cruises embark from two spots in the city, close to popular tourist zones. One is Nyhavn – Copenhagen’s former red light district, turned colourful restaurant hub. My cruise however, departs from Gammel Strand, right opposite Christiansborg Palace. This stately building is probably the country’s most re-built castle, and is now home to the Danish parliament.

On a cruise lasting about an hour, the boat weaves its way past many of Copenhagen’s main sights, both along its intimate canals, and on the open harbour. These include Borsen, a historic 17th century stock exchange easily recognized by its intertwined dragon tail spire, Denmark’s naval academy, the opulent Amalienborg Palace, and a few modern day royal residences (most of the Danish royals now live in comparatively modest apartments throughout the city). The cruise also gives a feel for Denmark’s love of innovative architecture and design. The Copenhagen Opera House and the Royal Library are two famous buildings on the tour, but we also pass some of the city’s most desirable residential blocks, and one of the country’s top architecture and design schools.

The cruise conveniently ends back at Christiansborg. The highlights of the palace can be comfortably seen in a couple of hours, but one of its most unique experiences is exploring the ruins beneath the surface. These date back to 1167, when the original castle was built by Bishop Absalon of Roskilde. You can see old Absalon’s likeness riding his horse above Hojbro Plads, the public square facing the palace.

The full history of Christiansborg, and the castles that occupied the site before it, might just wipe away any stereotypes you have about Scandinavia being peaceful – at least in its past. The palace has been attacked innumerable times throughout its history, and razed by fire twice. After the last fire, the royal family declined to return, and so instead, the palace became home to Denmark’s parliament, the ruins, a preserved royal kitchen, royal reception rooms boasting dazzling tapestries, and a fascinating theatre museum. Tickets can be bought for individual sights or in combination, to save a few kroner – something you’ll want to do at every opportunity if visiting Scandinavia on a budget.

A short walk (or in my case, hobble) from the southwest gates of the palace takes me to the National Museum, which compresses thousands of years of Danish history and prehistory into three floors packed with artifacts and stories. It’s also very wheelchair accessible. Giving my uninjured leg a rest, I drop myself into one of the available courtesy chairs and roll my way through dozens of rooms devoted to Northern Europe’s prehistory, which ends in a sizeable section devoted to Denmark’s most famous past residents, the Vikings. Remains of the world’s oldest known longboat are a highlight, amid a detailed telling of snowy Northern Europe’s settlement, Denmark’s often prickly relationship with the south, and its conflicted past with northern neighbours such as Sweden. With the day nearing its end, I’m forced to skip far more than I’d like, but since entry is free, a return visit seems definitely in order.

A local friend has taken the day off to show me some more of the city. After a leisurely breakfast, we head to Nyhavn, possibly the least “local” experience you can have in Copenhagen, but an essential stop nonetheless. This narrow harbour has changed a lot since its bawdy red light days, when it served the various ‘needs’ of sailors in port. It continues to welcome visitors to this day, albeit now in the form of restaurants, ice cream parlours, and walking and harbour tours. Even if you just want to stop by quickly for a photo of the colourful harbour side buildings that have become icons of Copenhagen, Nyhavn is a short and easy walk from Kongens Nytorv subway station. 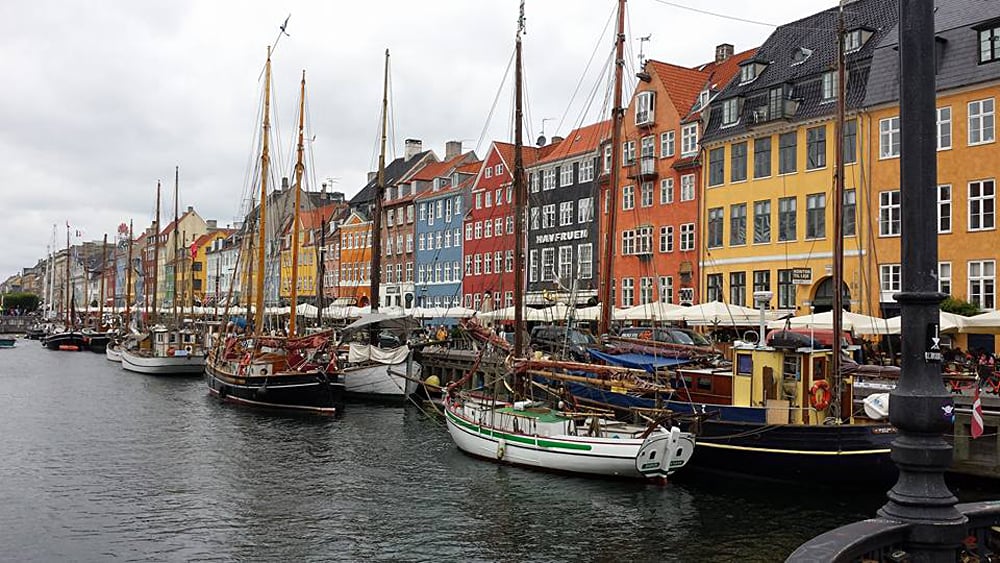 From here, we headed into town to Nikolaj Kunsthal, a former church turned contemporary art centre. The exhibition is free on Wednesdays, so we take up the offer, happy to snag a free gallery viewing and just as eager for a sit down (still on crutches, people). The variety of exhibits, mostly by Scandinavian artists, explores the interaction between human technology and natural processes. We see pieces composed of cloned Xmas trees, a plant in conversation with a computer, and other innovative oddities. The exhibition is part art, part science, and fully a very Scandinavian perspective at our evolving relationship with nature.

A sunny late afternoon (enjoying Copenhagen’s 10pm summer sunsets) is the perfect time for a stroll down Stroget, the city’s most famous pedestrian shopping street. But my companion urges me against it. Not only does Stroget’s popularity make it not the most crutches-friendly option, but many of the stores are chain staples that can found on any such high street in the world. Instead, we disappear up neighbouring Laederstraede and Kompagnistraede, where cafes and restaurants create a decidedly more local vibe. Refuelled with a slice of delicious strawberry cheesecake, we continue to the Radhus, Copenhagen’s stunning town hall. Fully fit, I’d grab a ticket for the tower, and take in the view over the city. As it is, I settle for a few snaps of the building before we continue to our evening destination – Tivoli Gardens!

Tivoli is a Danish household name. Dating back to 1843, it’s the world’s second oldest amusement park (the oldest, Dyrehavsbakken, is also in Denmark), and Copenhagen’s most popular summer attraction. Tivoli is a delight for all ages, whether you opt for a simple entry ticket, or an unlimited ride ticket. For thrill-seekers, this is highly recommended, since paying for rides individually is a sure-fire way to blow out your budget. If you want to try just one ride, consider the Rutschebanen, a wooden rollercoaster opened in 1914. It’s one of the oldest operating coasters in the world, and still perhaps Tivoli’s most famous today. Amid the cutting edge thrills of the large rides, the park is also used for concerts and theatre performances, community events, and boasts a special Halloween program. It even rewards the visitor content to simply wander through its immaculately maintained gardens, which include an impressive rose garden.

I’ve much more still to see in Copenhagen itself, but I decide to take a train ride north on my last day, bound for Kronborg Castle. This UNESCO World Heritage site dates back to the 1420s, and once stood guard over the entrance to the Baltic Sea. Overlooking the coast of Sweden (in cell phone range in fact, so an automated text tells me), Kronborg has a colourful history of conquests and trials, right up to its opening to the public in 1923. It’s all a little overshadowed though, by its greatest claim to fame, as the setting for Shakespeare’s Hamlet.

This significance is not lost on Kronborg/Elsinore today (Elsinore being the Anglicisation of Helsingor, the town closest to Kronborg). Those visiting in the summer months will get a dose of free theatre with their castle history as Hamlet Live takes over the courtyard and halls. This abridged, interactive staging of Shakespeare’s greatest play makes the most of the castle’s real locations including the royal chambers, ballroom, chapel, and underground passages, as you follow Hamlet, villainous King Claudius, Queen Gertrude, Ophelia, and other characters through Kronborg. While the play moves briskly, there’s still plenty of time to admire the castle itself. You can even chat with the characters in between scenes to get their personal insights into Kronborg’s secrets. After all, it’s their home!

The train back to Copenhagen is an easy hour’s trip. But I’m breaking it up at Humlebaek Station to visit Denmark’s favourite modern art museum, the curiously named Louisiana. In fact, the museum was named by the property’s first owner, Alexander Brun, after his three wives – all of whom were named Louise. The building is as impressive as the art within, if not more so, fitting seamlessly into the hillside overlooking the Swedish coast. Inside, visitors can explore works by Warhol, Picasso, and many others, before relaxing in the sculpture garden, surrounded by the creations of Henry Moore and Jean Arp. Classical art purists may glaze over, but the museum is a peerless highlight for modern art buffs visiting Denmark on a Europe tour.

Three days is over far too soon, and I feel like I’ve barely scratched the surface of Copenhagen. The mental checklist of sights I still want to see includes Rosenborg, the famous castle of King Christian IV, the country’s first “skyscraper,” Rundetaarn, the countercultural community of Christiana, and of course, more time soaking up the street-level pleasures of Copenhagen. Any return visit is also sure to include a day trip over the Oresund Bridge to visit Malmo, Sweden. But all these will have to wait – hopefully for a time when I’m back on my feet with no crutches in sight. 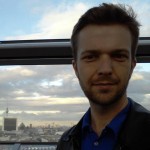