Kenya is a land of beauty and diversity, with an endless list of reasons to visit. Featuring stunning landscapes, animal and plant life, and fascinating cultures, Kenya is truly blessed with these riches, and more! We asked some of our Africa Experts what they love about Kenya, and have compiled a list of why this country remains so close to our hearts.

A country is defined by its people, and the Kenyans are a friendly and proud nation despite the fact that there is a number of different ethnic groups, languages, and religions. Their big smiles, especially on children’s faces, and the friendly jambos (greetings) around every corner, goes a long way in making Kenya a welcoming destination to all who visit!

The Culture
Kenya is home to 42 unique cultures. Of these, the Maasai is probably the most well-known, as the tribe is dressed in their bright red robes. They preserve their traditional way of living and dignity. Closely related to the Maasai culture is the Samburu people who are semi-nomadic pastoralists living north of the equator. The Samburu paint their faces using striking patterns to accentuate their facial features.

The Maasai Mara
The Masai Mara is regarded as the jewel of Kenya’s wildlife viewing areas. The annual wildebeest migration, known as “The Greatest Show on Earth”, involves over 1.5 million animals arriving in June and departing in November. As well, the reserve is home to one of the highest lion densities in the world, and also hosts over 95 species of resident game.

Mount Kenya
Mount Kenya is Africa’s second highest peak. For the Kikuyu people, this majestic mountain remains the sacred heart of their folklore as it is the final resting place of their god, Ngai. Traditional belief dictates that all Kikuyu homes should be built with their doors facing the mountain. This awe-inspiring sight, with its rugged snow-capped peaks, can best be viewed from the Fairmont Mount Kenya Safari Club, especially at sunrise when the early light silhouettes its impressive summit – high over the surrounding plains.

The Lakes
Kenya offers a variety of lakes with something to appeal to everyone. There are lakes that are a bird watcher’s paradise (Lake Nakuru, Lake Naivasha and Lake Elementeita)… to lakes with spectacular hot springs and geysers (Lake Bogoria)… to lakes with islands (Lake Victoria), all are united by the common feature – a number of interesting things to see and do amidst natural beauty.

Birdlife
Kenya has some of the best birdlife in the world, with some 1089 different varieties! Mainly due to the favourable climate and diverse habitats, birding is good all year round. Even in Nairobi, the capital city, more than 600 species of resident and migrant birds can be spotted. There is not an area in Kenya that is not a good place for finding our feathered friends.

Mombasa
Steeped in history, Mombasa is an island linked to the mainland by bridges and ferries. The imposing Fort Jesus stands sentinel over the busy harbour, where ships mingle with traditional dhows. It is the gateway to Kenya’s pristine, palm-fringed white sandy beaches, which are home to a number of world class resorts. Marine life is spectacular and popular with snorkellers and divers alike. A day spent on board a dhow is a fantastic way to explore the coastline, with a stop at Wasini Island for a delicious seafood lunch!

The Conservation Efforts
The David Sheldrick Wildlife Trust is the most successful orphan-elephant and rhino rescue and rehabilitation program in the world. Located near Nairobi National Park, visitors can watch the baby elephants being fed and learn about the amazing work the program is doing.

Working in conjunction with the Jane Goodhall Institute, the Ol Pejeta Ranch has created the Sweetwaters Chimpanzee Sanctuary to provide lifelong refuge to orphaned and abused chimpanzees from West and Central Africa. Ol Pejeta is also the largest black rhino sanctuary in East Africa, and is home to over 100 of these endangered creatures.

These are just 2 of a number of conservation efforts being made in Kenya.

Wildlife
Besides the Big Five, and all the usual suspects one expects to see on safari, Kenya has a number of mammals and bird species which are endemic to East Africa. Of particular interest are the Grévy’s zebra – the largest and most endangered of the three species of zebra; the reticulated giraffe – which is among the most well-known of the 9 giraffe species, which can interbreed with other giraffe sub-species; and the vulture guinea fowl – the largest species of guinea fowl, to name but a few.

Tree Lodges
Imagine staying in a tree lodge while on safari. In Kenya you can! Located in the Abedare National Park is Treetops, a world-renowned rustic treehouse where Princess Elizabeth ascended to the throne to become Queen of England! Similarly The Ark, also in Abedare, offers a unique and quirky option for accommodation. Modelled on Noah’s Ark and overlooking a waterhole and salt lick, game viewing is done from the comfort of the viewing decks at the lodge. Rooms are fitted with a buzzer to alert you of the presence of animals visiting the water hole at night, should you wish to see them. Talk about service! 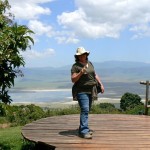